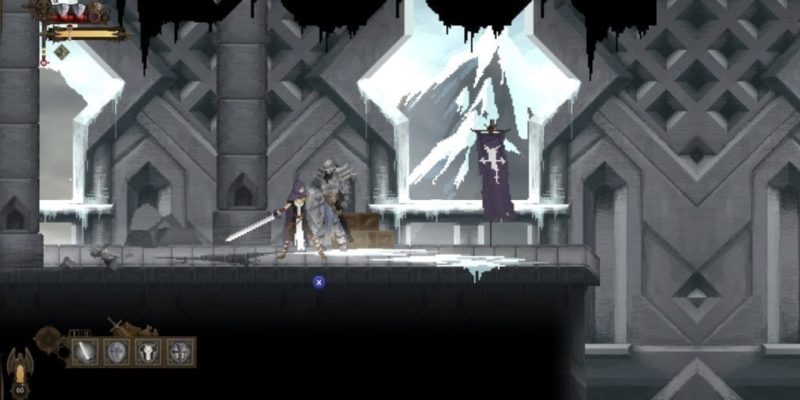 I’d finally managed to find a weapon better than the one I’d been using for hours and a mask that gave me extra health. It was still so dark I could barely see anything, but I was in the rare position of having gear that wasn’t awful. All I needed to do was make it through this room. I needed to go down, though, and every route required a leap of faith. I peered down into the darkness as far as I could, seeing nothing, and then dropped… only to land in an instant death pit and lose all the items I’d finally gotten my hands on. Such is exploring in Dark Devotion.

The game can best be described as a side-on Souls-like with some roguelite mechanics thrown in. The main difference is that, instead of losing your experience when you die, you lose everything but your experience. Dark Devotion is divided into four main areas, each of these linked together by separate rooms and boss battles. Rooms can have multiple exits, so there are a lot of different routes to be found, including non-mandatory boss battles and tablets that power up your character.

When it comes to improving your character, you really only have these runes and the skills you can buy with experience dropped by enemies. The runes are scattered around the areas and are shown in Dark Devotion‘s fairly decent, expansive map screen. These increase one of four attributes – damage, stamina, faith, and critical damage. Experience is also not dropped by most enemies, so it can take some time to accrue enough to purchase a skill. The skills are available in 5 rows, but only one per row can be activated at once and many of them are aren’t particularly useful. 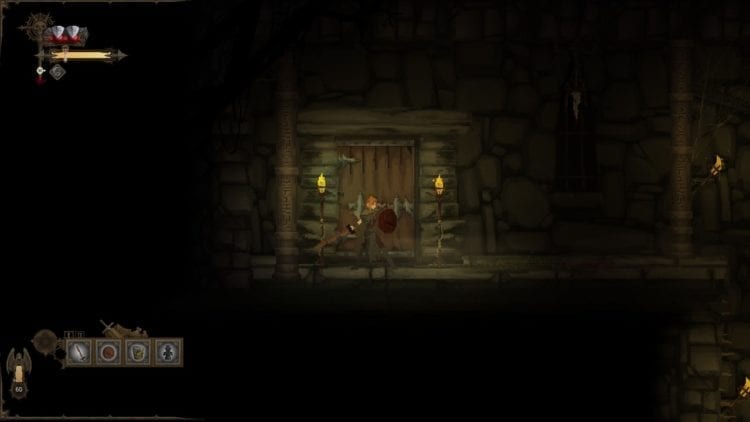 There’s also a teleporter available in the hub that can be active on a single teleportation statue at once. These statues can be activated in the levels and allow you to get back in with minimal fuss much of the time. Unfortunately, these can be spaced out really badly. There would frequently be a statue every few rooms, followed by a period where I wouldn’t see one for as many as ten.

Combat in Dark Devotion is extremely stamina-heavy, even more than most entries in the subgenre. Attacking, rolling, and blocking all use up stamina and it’s really easy to run low on it after just a couple of attacks. The attacks are also mostly extremely slow, regardless of what weapon you use. The rolling feels fantastic, though. It has just the right amount of i-frames and is extremely responsive. Blocking performs similarly. It’s attacking that’s the problem, with the slowness making it feel like a chore.

On a controller, attacking is mapped to the right trigger for whatever reason, which feels unpleasant in this perspective. And no, there’s no option to change this. Most of the combat can be described as follows: wait for the enemy to attack, dodge to the side, start the slow attack animation, hope it connects before the enemy starts attacking again, and then roll to safety. You typically can only hit your foe one time during this process, which can make the fights tedious. There are one-handed weapons that can be used with shields, two-handed weapons, bows, and spells available. I mostly stuck with two-handers, though, as the one-handed weapons just don’t do much damage at all while still being painfully slow. 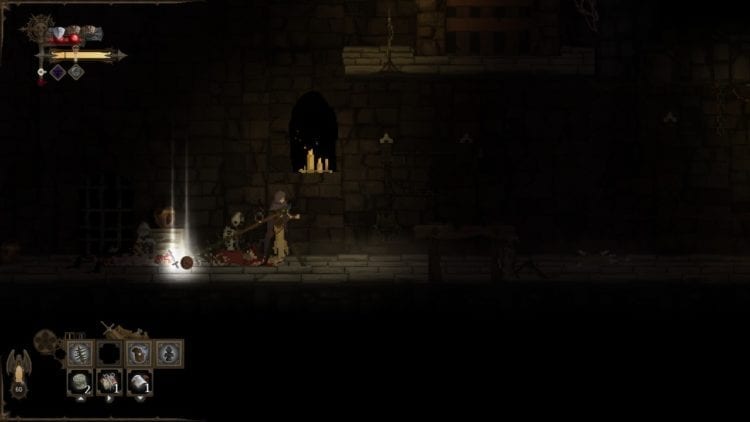 The way the game handles health is pretty unique. You see, your health bar only allows you to take two hits if you’re unarmored. All damage is equal, so no attacks will deplete your health bar instantly, but adding to your health bar requires finding headgear. The game has a hub that allows you to select which section to journey to and also has NPCs. One offers quests that are always tied to killing a certain amount of enemies. One of the most important of these is an NPC that operates the forge, which is where your saved items are found. You can get these saved items via completing quests, defeating bosses, or from regular enemy drops.

Unfortunately, these drops are insanely rare. I spent a large chunk of the game just hoping to find better permanent weapons and armor without seeing a thing. I went several hours at one point using the exact same piece of armor and weapon. Enemies also drop weapons and armor that you lose when you die, but finding decent ones is also very rare, meaning that you’ll spend most of your time making use of the ones saved in the forge.

An early boss dropped a weapon that I used for over half of the game, as I never found any other permanent weapons that were even close to as strong. I defeated one boss and earned a cudgel. A while after that, I took on a fairly challenging boss and was rewarded with a weapon that did roughly half the damage. Even bosses much, much later in the game regularly dropped weapons that didn’t come close to the cudgel’s damage output. And at this point, it was taking a lot longer to cut through bosses as well. 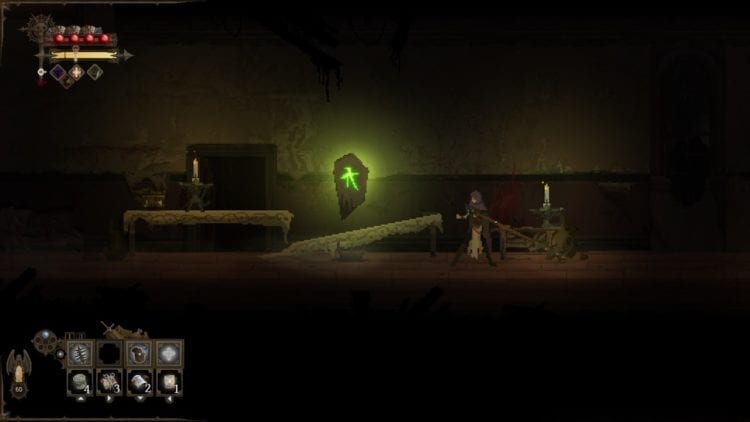 Enemies and chests thankfully drop plenty of consumables that you can use to heal your health and armor, along with a myriad of others. You can also get temporary stat bonuses and similar boons and items from statues that you pray at with the game’s equivalent of mana. Instead of a typical magic pool, you have faith, hence the devotion aspect of the game. You use this faith to cast spells and to pray at statues or even open up routes to interactive objects.

Visually, Dark Devotion has a moody, bleak atmosphere. The game is rendered charmingly with nice-looking sprites that animate well. As per the title, the game is also extremely dark. Too dark, even. All the light sources are constantly flickering, which caused me a bit of eyestrain. But it’s so dark that I would frequently get hurt or die just because I couldn’t see. Swinging axe traps early on would hit me in the face, doing two units of damage, but I just couldn’t see they were there.

There are also instant death pits that you can fall into, which can be very difficult to see coming. This is made worse by how frequently the game requires you to make leaps of faith. You can only look down so far, but you have no way of knowing what you’ll land on. You also get briefly stunned upon landing, but this is enough time for multiple enemies to kill you if you land next to them.

The part of the game that does the best job of demonstrating the darkness issue is when I needed to progress in one area. I needed to kneel on a specific area of the floor in order to trigger a platform, but I literally couldn’t see it due to it being as pitch black as the rest of the floor surrounding it. I even had the gamma up a bit higher than the game’s recommended setting and still had frequent issues with seeing my surroundings. 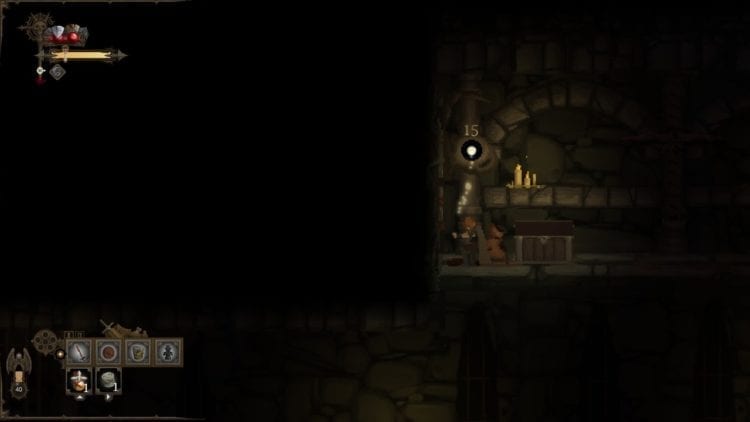 It doesn’t help that enemies can shoot you offscreen without you even knowing they’re there. You can also be hit with two separate attacks within milliseconds of each other, which can kill you before you know what’s happening. One boss fight, in particular, leaned on both of these things. The boss made crystals that spawned enemies, while also creating a mist that greatly obscured my vision to the point that I, once again, could barely see. While destroying one of these crystals, the boss would then take repeated potshots at me from across the screen. These frustrations do not mix well with how slow and clunky attacking in Dark Devotion is, which severely marred my experience.

Also, you know how you can’t pause in Soulsborne games because of the constant multiplayer? Well, Dark Devotion doesn’t let you pause either, but it’s just for “challenge” here. If you’re looking at the map and trying to determine where an exit or an upgrade tablet is, make sure there aren’t any enemies nearby or they’ll murder you. It’s worth mentioning that there also isn’t a jump button, so don’t go in expecting to be able to retrace your steps once you drop down to lower levels.

Dark Devotion is a fairly lengthy experience. It’ll likely take most people around 15 hours or so depending on how much they explore. It’s also a fairly challenging game, but that’s mostly due to how steep the death penalty is and how few hits you can take before expiring. Thankfully, you can use your dodge to cancel all of your attacks; otherwise, the long wind-ups on said attacks would constantly lead to deaths. The bosses can be pretty tough, but don’t expect to put an hour or more into each one just to beat it. Once you learn their patterns, they go down fairly quickly. 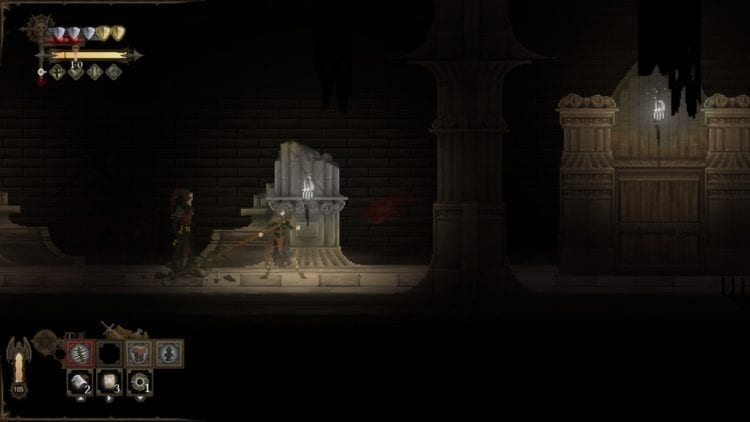 There are certainly things to like about Dark Devotion. The atmosphere is good, some of the controls feel incredibly natural, and the boss fights can really get your blood pumping. But the combat is thoroughly unenjoyable, the stamina management is obnoxious, and I had so much trouble seeing that the game left me frustrated more often than not. The rareness of the permanent drops along with how hard it was to find decent gear really make Dark Devotion more of a slog than it needs to be. There are still things to enjoy here, but its problems make it hard to recommend to anyone put off by a rather cumbersome experience.

Dark Devotion is intriguing, but design problems and cumbersome combat do their best to keep it from reaching its full potential.

Imperator: Rome Review – It Came, It Saw, It Faltered