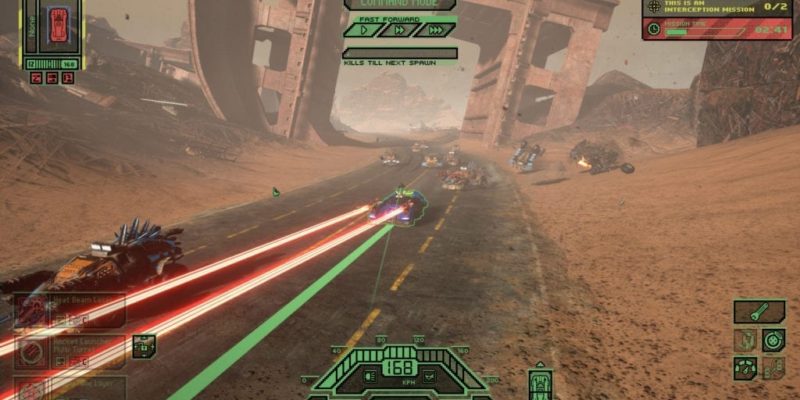 Dark Future: Blood Red States is a reboot of a Games Workshop board game from the 80s, which saw players controlling toy cars on a miniature road. Keeping with the spirit of the original tabletop game, the combat in Dark Future is more akin to a strategy game than a vehicular combat game.

I’ll admit that I’m a sucker for these wasteland-type worlds. I am also cautiously curious to see how the combat pans out. The HUD reminds me of the vehicular combat game Interstate ’76. However, the developers have made it clear that this is not a driving game, but rather a real-time strategy game.

In Dark Future, the world is overrun by gangs who fight to survive outside of Patrolled Zones. Everything between the East Coast and the West Coast of the US is known as the “Big Empty.” Instead of trying to impose the law, the government resorts to paying bounty hunters to keep the roads free of violence. That’s where the player comes in.

The game requires the player to earn enough cash so they can build up a small team of drivers. The cash earned in battle, of course, allows the player to upgrade their cars. This is where the RTS elements start to show. The player is responsible for maintaining a team of battle-ready drivers, each of whom can be upgraded. One such upgrade might include an optical lens, giving the player an advantage on the battlefield. Dark Future also allows the player to sanction those drivers to accompany them on the road, if that particular mission requires multiple vehicles in order to take out the bad guys.

In terms of gameplay, the player does no actual driving. When you see an enemy, the game lets you to enter a command mode. This drastically slows the game speed, allowing the player to view the enemy and use the HUD to decide which weapon is best suited to take these enemies down. The weapons include anything from a 360-degree mounted turret, to missiles, to explosive canisters that fly out the back of your car.

I must admit that this game has piqued my curiosity. I like when developers take a new spin on the strategy genre. And this one almost looks to be an on-rails shooter, just with strategy elements. Those elements are, of course, combined with upgradable characters and vehicles. The developer has mentioned in a teaser video that the game will feature permadeath, although it isn’t clear if this refers to the main character or the team of drivers employed by the player.

Auroch Digital’s past Steam games have received mixed reviews, so hopefully Dark Future does well for them. The game is out today and was developed using Unreal Engine 4.