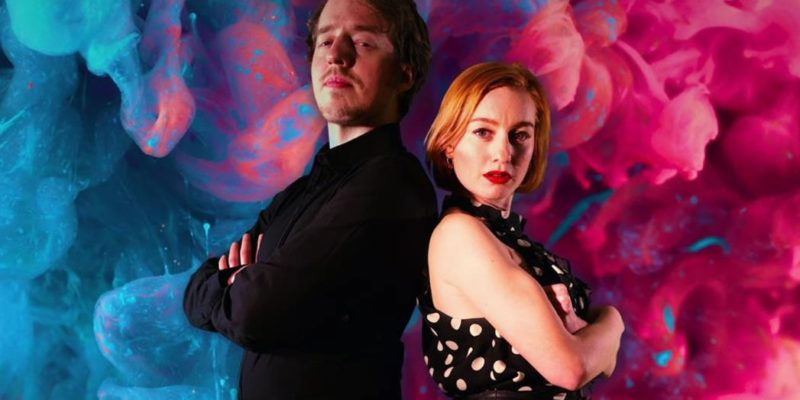 I have a mildly unhealthy love for FMV games. I say unhealthy because, historically, most of them are crap. From Voyeur to Frankenstein: Through the Eyes of the Monster, I’ve played and “enjoyed” far too many. So the modern resurgence has pleased me, and D’Avekki Studios has made a few actually good FMV games. Dark Nights with Poe and Munro, focusing on the two radio hosts from The Shapeshifting Detective, has a pedigree to live up to.

It’s a bit of a shift from D’Avekki’s other two games, but that’s perhaps to be expected. They weren’t much alike, either. The Infectious Madness of Doctor Dekker had you interviewing psychiatric patients (and murder suspects) using a text parser. The Shapeshifting Detective was more adventure-y and had you tracking down a murderer by changing into other characters to eke out bits of information.

Dark Nights with Poe and Munro is closer to a traditional interactive movie. A video plays out, and you occasionally make a timed choice to decide what actions the characters take and where the plot goes next. (Actual quick-time events are mercifully rare.)

A series of dark nights 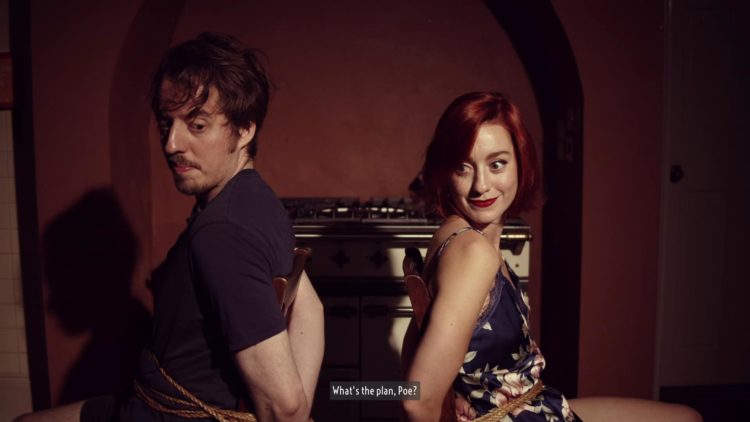 Perhaps fittingly for a pair of macabre radio hosts, Dark Nights with Poe and Munro is an anthology series of spooky stories. Most of the six episodes are around 20 minutes in length, and barring the eponymous characters and a few references, each is also self-contained. Rather than a longer, overarching plot, you’ve got six ghoulish mini-stories. Werewolves, past-lives regression, and wish-granting paintings are all in full effect.

That episode length probably doesn’t seem too long, but each of them begs to be played more than once. While they’ll always come to some sort of conclusion, there are plenty of alternate paths, endings, and extra details to uncover, some of which can comprehensively change your understanding of each story. Before unlocking the skip function (after finishing all six episodes), I was spending over an hour on each just to see the different ways things could play out. And some of the possibilities do offer up some unique twists on the tale.

That says a lot for how much I wanted to explore each episode. Things are almost never fully explained, and there are usually hints of some deeper horror or supernatural element. But the story is generally left up to your own interpretation, which is fitting for short-form horror of this nature. Still, Dark Nights with Poe and Munro is rarely “scary,” usually opting to be unsettling and leave you uncertain. It’s the sort of horror that amuses and delights, rather than tries to leave you unable to sleep. 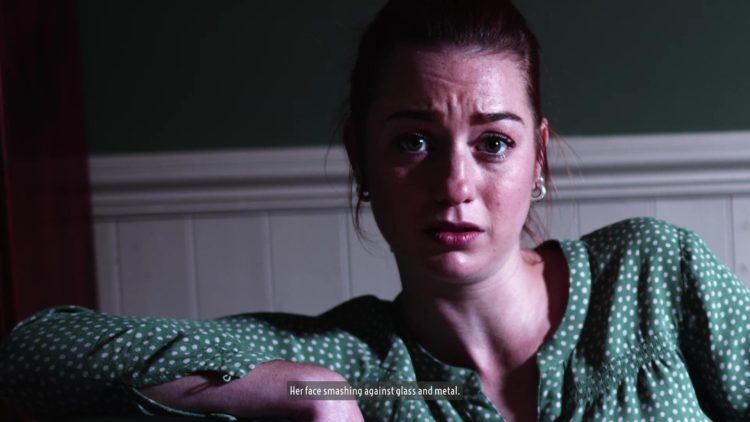 The Doctor Dekker-themed episode is legitimately kinda disturbing, and it gives Leah Cunard a chance to show off a very different side of her acting.

The episodes themselves vary wildly in tone and – to some extent – quality. Some are short, tight vignettes, like a potential murderer breaking into the studio. One is a complete shaggy dog story. But some of the others are far more fascinating.

One episode has the pair investigating a kidnapping in August, the town in which Dark Nights is set. Rather than proceeding on rails and having you make snap decisions, it has you choose the order in which the duo follow leads and how they interrogate and investigate. It’s the same mechanics, but used in a more traditional “adventure” way.

Another excellent episode is a massive call-back to Doctor Dekker, in which you interview a new patient. It’s maybe a tad self-indulgent, but it’s easily the single creepiest episode of the lot, with some of the finest acting. It’s also pretty much the only one that really unsettled me. 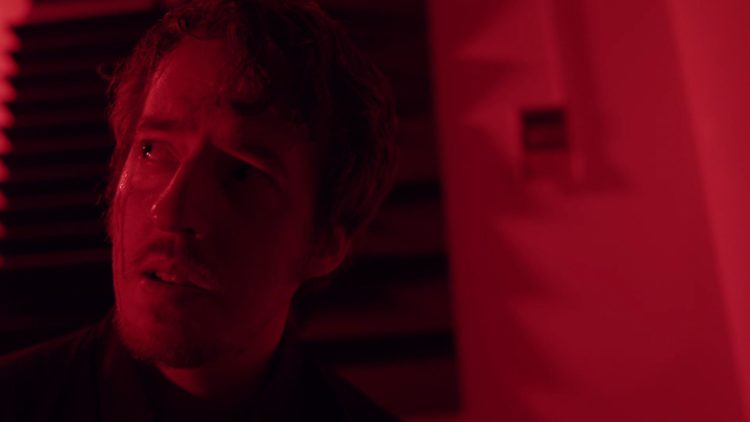 Your actions might lead to the saving of lives, or possibly the taking of them.

A lot of the game’s weight rests on the shoulders of leads Klemens Koehring and Leah Cunard (Poe and Munro, respectively), but they carry it well. There’s a natural chemistry between the duo, some delicious melodrama, and a lot of sassy-but-flirty back-and-forths. They’re eminently believable as a pair of colleagues and secret lovers, with one flirty but sharp and the other more morbid and serious. The acting is, from everyone, decent at worst: Some are delightfully cheesy, while others are more serious and sinister. It’s a pleasant mix that goes along with the varied tones of the episodes.

But some of the more technical aspects don’t work quite so well. I can forgive some of the choices you have being a little unclear. The episodes are short and replayable, so picking an option without necessarily realizing what it means isn’t too much of a problem, for once.

On the other hand, I do have a few issues with the FMV. For a (presumably) late-night show, at least one scene in the studio appears to take place in broad daylight. On the flip side, a lot of the video footage is filmed in dark environments, but in the really dark scenes a lot of the “blacks” have some video artifacting. It’s a tad distracting, though thankfully not too many scenes take place in near-pitch black. And that’s without mentioning occasional audio clipping and some other little issues that make things feel a little less professional.

The infectious FMV of Doctor D’Avekki 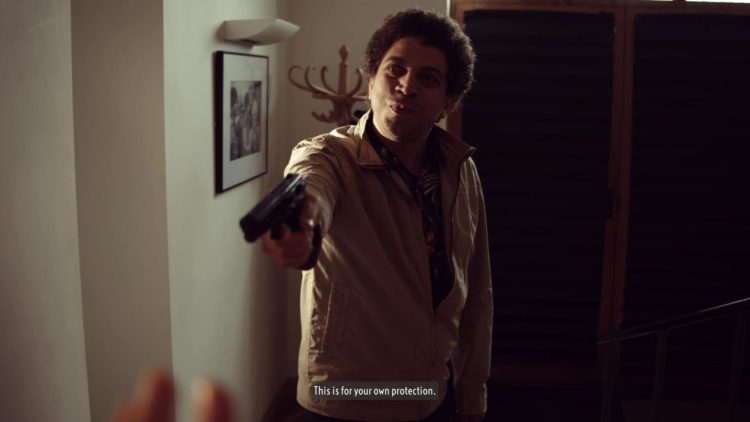 Considering the price point of $13 USD, it’s hard not to recommend Dark Nights with Poe and Munro. One or two of the episodes are a little naff, yes, and there are a few minor issues with subtitles in addition to the other issues. I also think it’s the weakest of D’Avekki’s games so far: It doesn’t have the sinister undertones of Doctor Dekker or the creativity in player agency of Shapeshifting Detective. Nonetheless, it stands pretty well as its own thing — a set of fun little mini-adventures.

And frankly, if you’re the sort of person who’s even considering this, none of that should be too much of a turn-off. If you like slightly cheesy FMV games and (mostly) light horror, Dark Nights is honestly a no-brainer and a lovely piece of entertainment. On the other hand, if you’re easily put off by bits of overacting or want something you can really sink your teeth into, it’s maybe not for you.

Dark Nights with Poe and Munro is no revolution, but for what it is, it’s just right.

Dark Nights with Poe and Munro

This anthology series of six short but replayable episodes has just the right mix of charm, melodrama, and creepiness to make it worth a look.