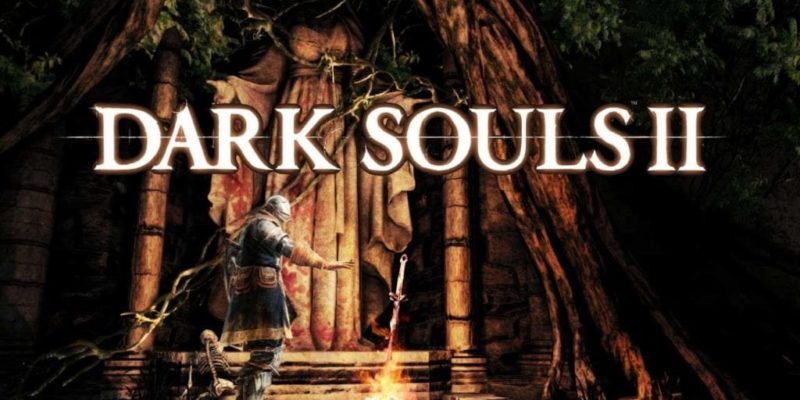 Remember when Namco Bandai and From Software were showing off Dark Souls 2 prior to release, and seemed quite excited about sections that would require illumination by torches like the Tomb of the Giants segment of the first game? Me too, they looked neat.

Having to keep a lit touch in your hand and light up various beacons along a dark passageway (preventing the use of a shield) appeared to be an aspect of the game that was being somewhat expanded. This was supported by a rather lovely dynamic lighting system, which you can see in the video linked above.

Crappy stream quality aside, this is what Dark Souls 2 used to look like.

The same lighting system and graphical punch could be seen in pre-release footage taken from trade show demos (supposedly running on PlayStation 3s) of the battle with the Mirror Knight boss. You’ll probably recall the foreboding hallway leading to the encounter, which was lined by statues that come to life as the player passes by.

Videos of the PS3-based beta network test also seem to show something approaching this build of the game.

But the version actually released to Xbox 360 and PS3 this week doesn’t look much like any of those videos. YouTube user ‘HyperBitHero’ has put together a very instructive comparison video [Edit: Now reuploaded to YouTube after some music issues] that highlights several of the obvious changes to Dark Souls 2. Sadly, all of them appear to be for the worse. Just look at the part featuring a walkway across a pit filled (originally) with salamander type creatures. It’s now just a stroll across a beam above some slightly rubbish flame effects. The Mansion of Dragons shown in early release videos is also significantly different.

Dark Souls 2 still seems to have been well received by the people playing it (I won’t pass any kind of judgment on the game overall, as I’ve not played enough) but something clearly happened between the promotional and release stage to trigger this downgrade. You’d think it would be in Namco Bandai or From Software’s best interests to maybe explain, or at least acknowledge what’s gone on here.

The most obvious theory is that the aging hardware of the 360 and PS3 simply couldn’t support the fancier lighting and textures without ruining the frame-rate of the game. Suggestions that even the current, downgraded version can’t hold 30fps on either console would add credence to that idea. After all, nobody wants another Blighttown. If that’s the case though, it appears to have been quite a late decision. Players are saying that areas in the game still appear to be designed around the torch-lighting mechanic, but are now light enough to play through without actually having to kindle any additional beacons.

That’s a real shame, because it sounds as if a feature that From was excited about prior to release is now far less prominent. It was also rather disgraceful of Namco Bandai to use the version with fancier graphics in promotional video materials right up to release (albeit with disclaimers saying “not necessarily representative of final footage, suckers!” in microscopic letters at the end of each trailer.) Now we know why the screenshots, which do appear to show the release version, always looked worse than Dark Souls 2 video footage.

The PC version looks sharper, but those wall textures look like the new, “downgraded” ones to me.

The question is, could the graphics and lighting make a return in the PC version on 25 April? That’s the hope some people are clinging to, but it may be wasted optimism. Screenshots from the Steam store page certainly show higher resolutions and (maybe) a bit more texture clarity, but are inconclusive in terms of lighting.

In theory, the PC version should be able to handle the more demanding textures and lighting shown in pre-release presentations. However, the extremely reasonable minimum system specs would indicate that a relatively straight console port is more likely.

Namco’s PR are busy dodging the issue. When asked what Dark Souls 2‘s PC version will have “Over console. Mainly with the lighting,” Namco’s US twitter account did a verbal swerve worthy of a politician, replying: “That’s definitely something we can look for answers on as we start gearing up for the PC launch.”

That’s not even a confirmation that answers will be forthcoming later, just an indication that Namco will “look” for them. You’re the publisher, Namco, if you can’t find those answers about your own game then you’re either being willfully obstructive or incompetent.

No clues from the main English language contact for the game, then.

This is lit pretty nicely though, so who knows?

To clutch at some straws, the installation size for the PC version of Dark Souls 2 is listed as 14GB on Steam’s store page, which is a fair bit larger than the 5.8GB required for a 360/PS3 version. That’s presumably just a discrepancy between higher resolution textures, and maybe an introduction scene running at a higher resolution too. But maybe, just maybe, it indicates a version closer to the one shown in pre-release materials. Curiously, Namco’s system specs had the required space for PC listed as 8GB (still larger, but less so.)

When speaking to Giant Bomb earlier this year, Namco’s Brian Hong stated rather cryptically that “PC gamers will not get cheated. I’m not only talking about gameplay.” That stood out to me at the time and it still does. Sadly, he was probably just talking about physical extras like Collectors Editions.

Modding may not come to Dark Souls 2’s rescue this time, either. The DSFix made by Peter Thoman (Durante) did wonders for the resolution and added things like SSAO effects, but tackling an entire lighting system is a whole other matter.

Until Namco or From say something definitive, or we get a PC-specific trailer, or 25 April rolls around, it’ll remain a mystery whether the dynamic lighting and superior textures will ever return to the game. I strongly suspect that build no longer exists in any meaningful sense, which is a damn shame. Dark Souls is not exactly a series about graphics, but it is one based heavily in art direction and atmosphere. That now seems a little bit diminished, and the silence from both publisher and developer about the last minute graphics switch does nobody any favours.