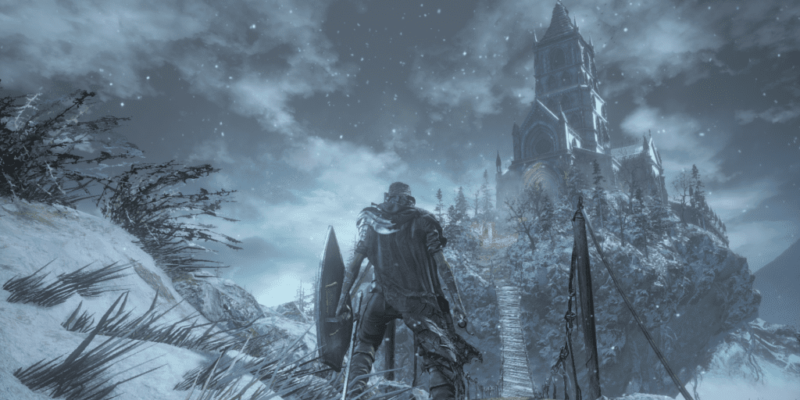 There’s a certain expectation that comes with the release of a new Dark Souls add-on, born of From Software’s close to flawless record with the medium. The Artorias of the Abyss expansion is, to this day, a go-to example of how DLC/expansions can be tremendous additions to a game when handled with care. Dark Souls 2’s triplicate of Lost Crowns and Bloodborne’s Old Hunters (not on PC, sadly) all enhanced their respective titles too.

Inevitably, as with the fading of flame, there must come a time when a Dark Souls add-on is simply ‘pretty good’ rather than exceptional. Dark Souls 3’s Ashes of Ariandel bears that responsibility, presenting a somewhat familiar pocket universe and attendant machinations for your Ashen champion to unravel.

It’s a bit chilly around these parts.

Ashes of Ariandel has you popping inside a painting once again, to land of blustering snows, avian menace, and rope bridges leading to imposing buildings. Like a lot of Dark Souls 3, there are nods aplenty to the first game in these aesthetics (albeit indirectly here, since you’re not revisiting Ariamis’ creation). But any sense of being ‘trapped’ inside this new world is rather undermined by immediately being able to warp out from the first bonfire if you feel like it. The first Dark Souls has proven to be the outlier in limiting teleportation, so that’s perhaps to be expected.

Broadly speaking, there are four distinct areas in which to freeze off your various extremities in Ashes of Ariandel. Snow-swept plains leading to a chapel, a Corvian village, a winding cliff-side climb, and an icy basin reached via some Great Hollow-like branch platforming. Though it doesn’t appear to be so at first, the chapel ends up acting as a crossroads where every one of those other locations can be reached in a matter of seconds. There are the usual time-saving shortcuts to unlock in this DLC too (some of them rather limited in their actual usefulness), but the way all roads end up stemming from, and simultaneously returning to, this central religious building is a smart bit of level design.

Without going too heavily into story or lore spoilers (in part because untangling what’s going on here is not simple), this DLC provides further context for the Corvian ‘storytellers’ in the main game, offers a little more on Pontiff Sulyvahn’s origins, and sets up its own, self-contained narrative featuring the titular Ariandel and his extended family. All is not well inside this realm, with its inhabitants variously encouraging you to find a bed to rot in, or burn the entire place to cinders. 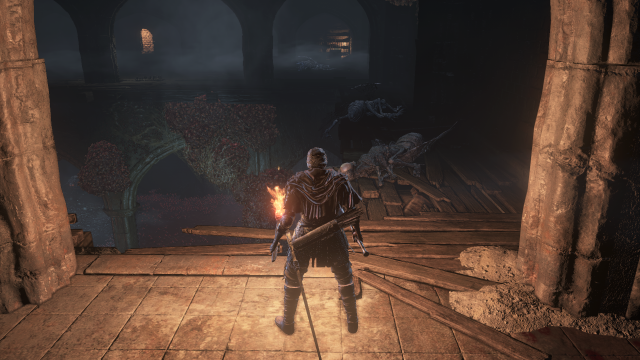 But it looks so lovely, why would anybody want to burn this?

While the overall layout of the area (both as individual sections and as a connected whole) is up to Dark Souls 3’s intricate standards, there’s a definite familiarity to proceedings. The Corvian village is rather like a (much) smaller Undead Settlement, and the spidery paths of the cliffside area an amalgam of the approach to Cathedral of the Deep and (again) a much smaller Bloodborne forest. After three Dark Souls games (plus a pair of similar projects) and several add-ons, it’s perhaps not too shocking to be revisiting prior concepts, and the callbacks here are at least fairly nuanced, environmental ones.

Artorias of the Abyss literally revisited areas too, of course, but it did so in service to a spectacular expansion of the Dark Souls narrative. We got to confront the legendary Artorias from the main game, and his boss fight lived up to the written depictions. We witnessed the fate of Oolacile, confronted Manus and the Abyss, and our characters became intertwined with the history of the land. In Ashes of Ariandel we’re accomplishing something too, but it feels less vital than prior additions (though, granted, it’s possible the full implications have not yet revealed themselves). Those hoping for more on Lothric’s ‘angels’, for example, will have to pin those expectations on the second, and final, expansion.

As with any Souls DLC, this one features plenty of new enemies, weapons, and makes the welcome addition of Frost-based spells. The foes range from the fairly standard Followers, your average tier armoured guys who show up in the greatest numbers (and do, in one variation, have a neat line in fire-breathing), to hyper-aggressive Corvian Knights with Wolverine claw blades. These latter guys seem to be operating under Bloodborne speed rules, while the poor player has to cope with mere Dark Souls movement, and I mostly resorted to avoiding or cheesing the hell out of them. 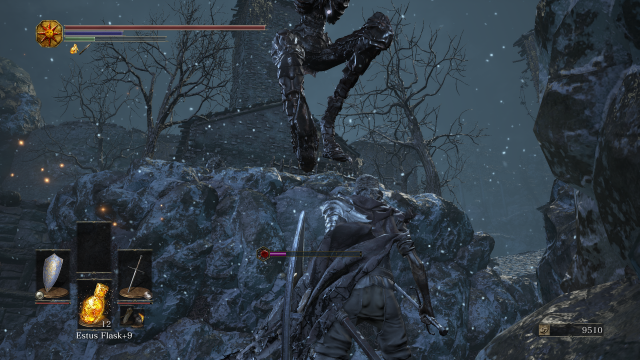 You know, rather than taking screenshots I should probably be dodging.

Ashes of Ariandel also assaults you with canny wolves (where’s Liam Neeson when you need him?), yet more people who’ve formed a mini arboretum (a favourite Dark Souls 3 topic), and some burly viking looking fellows who have too many hit points for their own good. This release is definitely geared towards post-finale (or very, very late game) characters. Many of the larger opponents hit hard, able to deplete a 30 vigor life bar in a couple of nonchalant swipes.

You can, at least, nab their equipment. The Corvian Knight claws (and rapier) can be obtained, as well as an earthquake-summoning mace, fire-breath torch, and Follower javelin. New outfits are yours to find as well, one of which has some particularly fetching red trim.

Writing too much about this add-on’s pair of boss fights would probably be unwelcome, as unlike Namco Bandai I don’t want to splash them all over pre-release coverage. One is more dynamic (in terms of ideas and move-sets) than the other, and both fall back on Dark Souls 3’s love of further extending boss life pools by adding separate phases and boss-buddies. The battles are engaging enough, but that trick, a symptom of developers having to keep up with savvier players in the boss fight arms race, is getting long in the tooth. 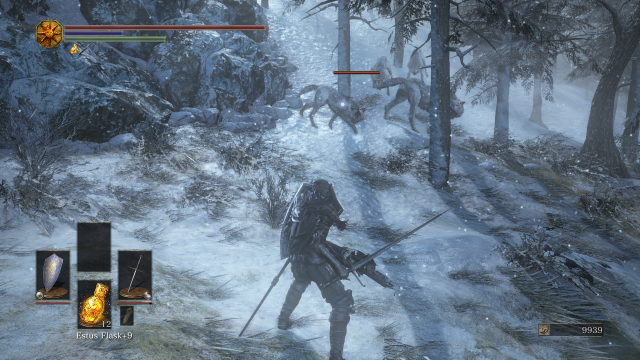 “It doesn’t matter if you’re the Ashen One, when the wolf sees you you’re already dead.”

Defeating the more optional of those two bosses gives you access to the new PvP arena, complete with a structured system of organising 1v1 Duels and more freeform 3v3, 2v2, or four and six player free-for-all Brawls. The pre-release nature of the code (and accompanying lack of server) means I’m not really in a position to comment much further on this aspect. Since I’m not a huge PvP enthusiast to begin with, my input probably wouldn’t be hugely insightful here in any case. While PvP is not the primary focus of this add-on, the inclusion of a structured system (outside of player-run ‘fight clubs’) could easily wind up as the main draw for those fully attached to that mode of play.

At around four or five hours in length (mostly depending on how long you get hung up on the bosses), Ashes of Ariandel is a relatively brief jaunt in another of the pocket Souls dimensions. That time includes a pretty active search of every area, and takes into account some sloppy Souls skills after being away from the game for a few months. The whole affair feels like a bit of side business that the Ashen One is sorting out; and that’s okay, it’s important and meaningful enough within its own world, but we’ve been spoiled by the spectacular in prior DLCs. ‘Pretty good’ is good enough for most add-ons, but by Dark Souls standards it’s a slight let-down.