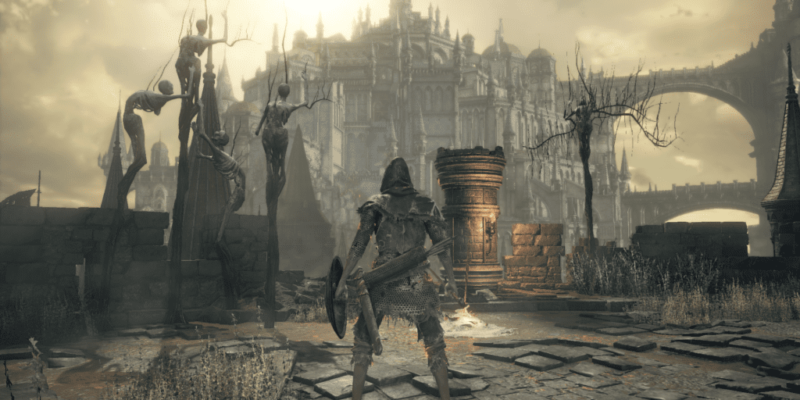 Since everyone and their mum (and their mum’s friend Cathy who does a bit of streaming on the weekends) seems to have an English language copy of Dark Souls 3 to show off at the moment, it’ll probably come as no surprise to learn that we have review code too. Actual reviews are embargoed until early April, and I wouldn’t dream of reviewing this game without finishing it in any case; but here’s a look at the PC graphics options and early impressions of performance.

If you’re worried about spoilers, this piece contains no direct story, NPC, or plot information. The images in it are restricted to menus, and out of context shots of early locations (within the first hour or three) of the game.

The Dark Souls 3 build knocking around reviewers at the moment is version 1.01, complete with a (non-final) release day patch. That means it should be the same version people will play on 12 April, but may be subject to change if From alters some things and deploys a new update in the next couple of weeks.

I’m playing it on a machine with the following specs: i5-6600 / 16GB DD4 RAM / 4GB R9 380X / Windows 10. AMD’s latest drivers at the time of writing are the Crimson 16.3.1 set, which I’m presently using. Power efficiency has been switched off, so my card shouldn’t attempt any cheeky downclocking shenanigans. 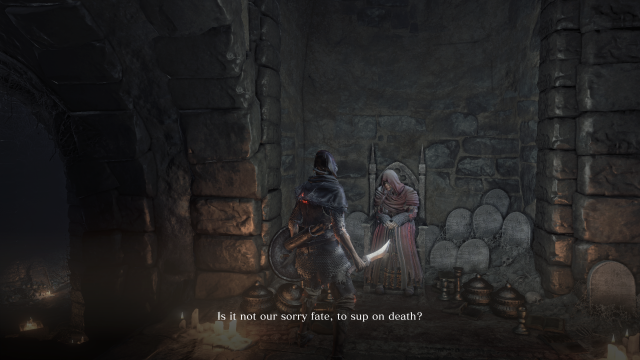 This very same Dark Souls 3 PC build has proved unstable for some reviewers, including the Giant Bomb (East) team who discussed (and ran into) some hard crashes during a recent stream. Quite why that’s affecting certain people and not others is not yet known; for my part, I’ve witnessed none of those crashes in about 12 hours of play. However, they clearly are a major problem for a minority of those who presently have access to the game, so From will need to track down the cause before wider release.

With that said, let’s see what the game has to offer in terms of graphics options. 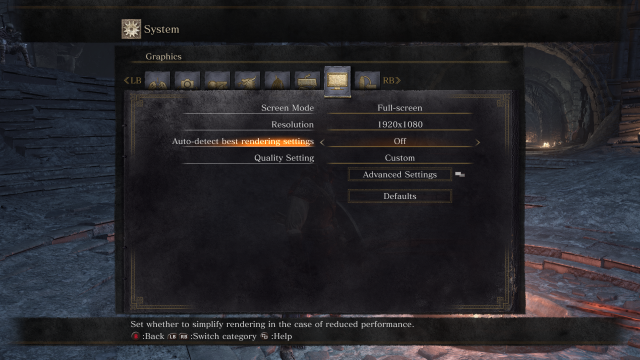 Above is the basic settings screen, where you can select resolution (it’ll support 4K if you have the relevant hardware for it), and the graphics defaults of Low, Medium, High and Max. Dark Souls 3 can be run in either exclusive Fullscreen or Windowed mode. There’s no option for Borderless Fullscreen. I’m unsure whether the auto-detect rendering option will change settings on-the-fly to try to boost performance, or if it’s something that’ll only happen between exiting and restarting the game.

The resolution options are pretty extensive, with support for 16:9, 16:10 and some 4:3 aspect ratios, as shown in the next shot. 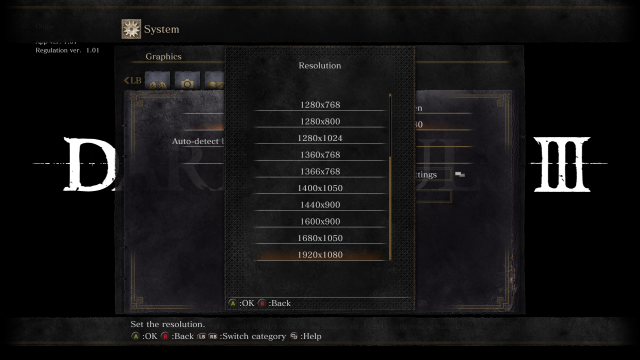 Moving on, then, to the advanced graphics settings. Worth noting here that some (texture quality, for sure) of these options require a full restart of Dark Souls 3 to take effect. Others, like the lone anti-aliasing option, are applied instantly. 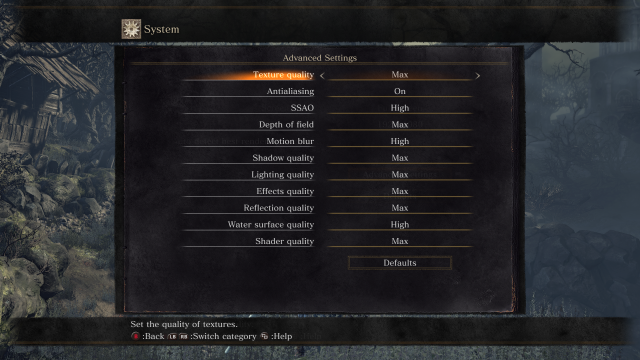 Most of the settings follow the Low, Medium, High, Max convention, but some (like Motion Blur and Depth of Field) have an ‘Off’ and others (Water Surface Quality) are just a High/Low toggle. While some of the effects are obvious at their extremities (there’s a pretty big difference between lighting, shadow and texture qualities at Low and Max), it can be much harder to spot what’s actually changing between, say, High and Max.

Here are some comparative shots, taken in the same spot in the early Undead Settlement location. You too can try to play spot the difference (the comparison widget doesn’t expand to full size, sadly – I’ve posted links to the 1080p shots in the comments below).

Finding a sweet spot of image fidelity and 60fps at 1080p has been somewhat tricky on my machine. Using the settings shown in the image below, I’ve managed to hold 60fps most of the time. Like prior Souls games, Dark Souls 3 will stutter (and dip to 57 or so) when loading in new bits of locations. That issue may be improved on an SSD, but I have this installed on HDD so I can’t say for sure. 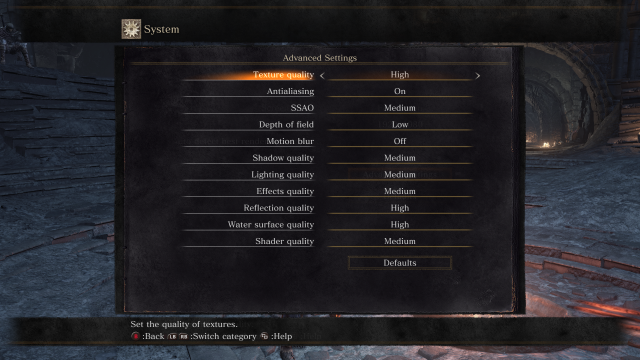 Outside locations in this game tend to have huge draw distances (plus quite a few freakish monsters or roaming knights), and these places cause my R9 380X some pain, sending the frame-rate down to the mid or (rarely) lower 50s. One particular zone in an area called Farron Keep is especially bad, tumbling the fps into the mid-40s. I’m not entirely sure why this is the case (other than it’s a hellish swamp area and From wanted a technical meta-homage to Blighttown), and trying that location on all Low settings actually makes very little difference to performance. It’s possible that the Bloodborne engine (a version of which Dark Souls 3 is apparently using) just needs a fair bit of juice to get it to 60fps in all scenarios.

Other than the Farron swamp (which is still perfectly playable, if a little annoying), the locations have fallen squarely into being 60fps when indoors and more like 53-57 when outside in demanding spots. I’m happy enough with that.

[Update 4 April] Having now reached the end of the game, I can say that there are also a couple of other late-game zones where performance (in spots) can really tank. It’ll go as low as 30 in certain spots, so I hope whatever’s causing that kind of strain on the GPU/CPU (or whatever it is) can be either toned down a bit or ‘optimised’ by some other means.

[Update 11 April] As of Patch 1.03 (the launch version of the game), the really bad spots are vastly improved. A late-game location that was at 30 fps in parts now largely holding 60. 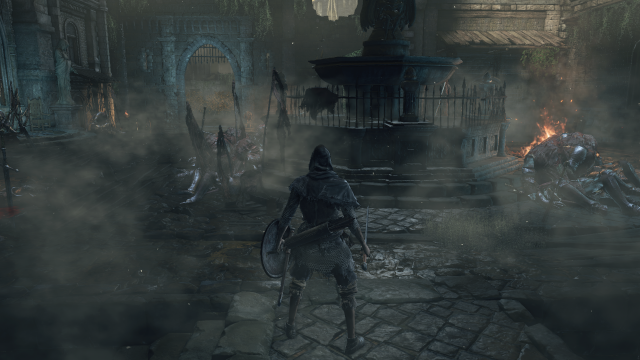 A lot of that Bloodborne atmosphere has crept into this title.

My suspicion is that Dark Souls 3 is a title where some brute GPU power is necessary to hold 60fps in certain spots, almost irrespective of graphics settings. An Nvidia 970 is the recommended card for this title, so the equivalent R9 390 will probably be required on the AMD side of things. Additional performance patches, as well as manufacturer-specific drivers, will also help in the longer run of course.

For those on significantly weaker hardware, there’s always the option of seeking console parity (possibly with nicer graphics) and opting for 30fps. The game doesn’t seem to have an option to intentionally lock to 30fps, which seems slightly odd, so some sort of external software like RTSS will be needed if that’s your plan. 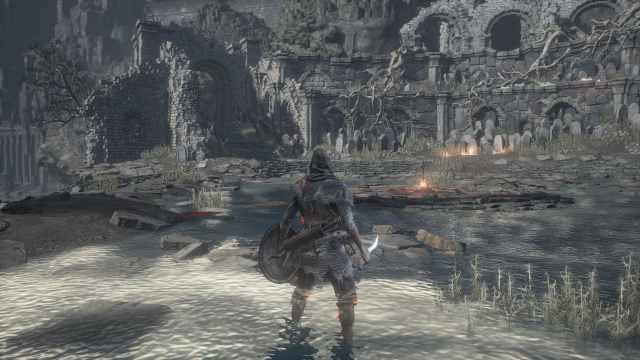 You should see confirmation above of keyboard and mouse button rebinding, which can be done for all functions in the game. The controller inputs can be rebound to a certain extent too (I switched jump back to B in classic Souls fashion, as it defaults to the clunky pushing-in-the-left-stick), with basically everything bar analog stick movements up for change. I’m still not sure I’d recommend playing any Dark Souls game on keyboard and mouse, but some people do, and it’s nice to see Dark Souls 3 partially acknowledging this with relevant options. Inventory menus, however, are as unpleasant to navigate with a mouse as ever. In that respect, this will always be a gamepad-focused series.

The rest of the in-game settings should be broadly familiar to prior Souls players. Matchmaking can be restricted to domestic regions or opened for worldwide play, and a password can be set up between friends for preferential matching. It’s also possible to restrict voice chat and the visibility of your summon sign in the worlds of enemy phantoms. In fact, here’s a screenshot of those very things. 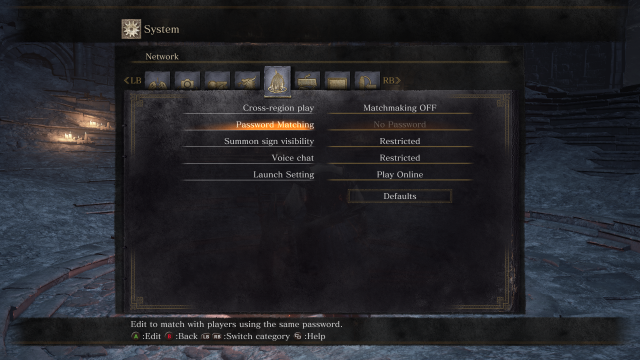 I’ve not had much luck finding co-op partners just yet, but the servers are up and functioning. The usual message system (which adopts the multiple-templates and optional gestures system from Bloodborne) is fully operational.

As in Dark Souls 2, you can choose to entirely hide the HUD, or set it to contextually appear when you use items, lose health, or generally do something that requires HUD information.

There’s also plenty of customisation regarding when the game helps (or doesn’t help, frankly) with switching or acquiring a lock on an enemy. Plus a new, intriguing toggle called Manual Attack Aiming described as “Allows for manual control of aiming large weapons when locked-on”. I’d need to do further testing (and have a character who can properly wield a massive sword) to be sure, but I presume it means the player will (optionally) retain a greater degree of control over the swing of a large weapon, rather than being entirely locked into an animation. If so, that could have some PvP implications. 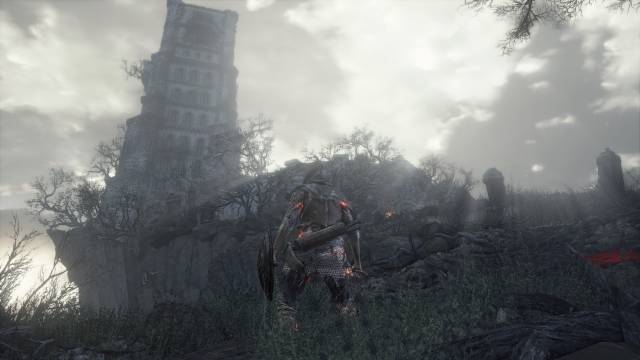 Overall, Dark Souls 3 feels much like the largely acceptable PC version of Dark Souls 2, albeit with much higher system demands as a result of the updated engine. Unless AMD support is lagging significantly behind, the listing of an Nvidia 970 (or equivalent) as the recommended GPU is one to take seriously if you intend to play at 60fps with higher-to-max settings. Lowering a few options can certainly squeeze out a few more frames if you’re on the cusp of being able to hold 60, but there doesn’t appear to be a huge variance between approaching the game on Low default versus High (Max does appear to be a step more taxing).

The troubling (if infrequent) reports of this build crashing are of concern, because (fix permitting) at this point there’s no way of knowing how many people that could potentially affect. But, that aside, Dark Souls 3 will comfortably be the best looking and best performing version on PC; providing you have the suggested hardware.

Will Mass Effect Andromeda Be About Colonialism?