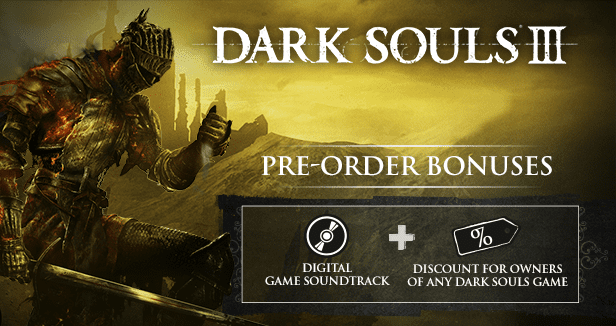 Dark Souls 3 is one game we’re eager to check out this year and the game is now available for pre-order on Steam.

A pre-order of the Standard Edition will set you back £39.99 and it and it currently has an 8% discount on it (which we assume is the loyalty discount mentioned below). This includes these pre-order bonuses:

Pre-order Dark Souls 3 III to get the official game soundtrack. Existing owners of any previous Dark Souls game on Steam will also receive a discount on a pre-purchase of Dark Souls III. .

Finally there’s also a Season Pass for £19.99 with no discount.  The Season Pass will grant access to the following:

Expand your Dark Souls 3 experience with the Season Pass and gain access to 2 epic DLC packs at a discounted price. Challenge yourself with new maps, bosses, enemies and additional weapon and armor sets

The discount pricing is quite odd and there’s not much of a saving between the Deluxe and Standard with the Season Pass. £56 is quite pricey and I have a feeling a few fans will end up shopping around for this one or just ignore the DLCs, at least that’s how it’s looking based on some of the comments that appeared on Steam.