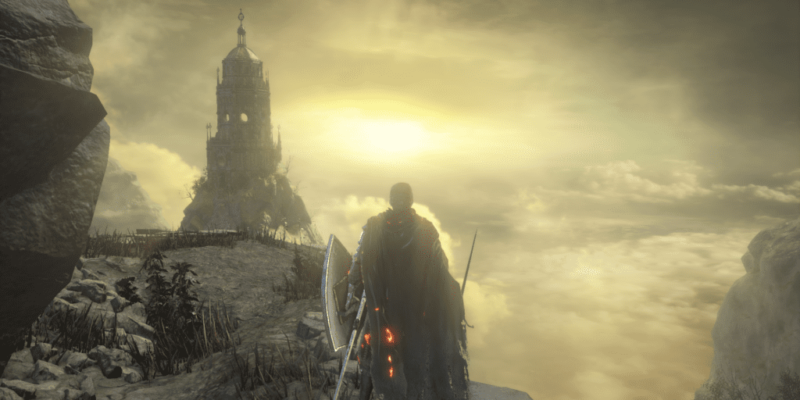 FromSoftware’s Hidetaka Miyazaki has tended to suggest in interviews that Dark Souls 3 will signal a period away from the series, if not conclude it outright. Titles as popular as this one tend not to stay gone for good, and From will probably face pressure from Bandai Namco to keep the cash coming in, but The Ringed City may be last we see of Souls for a little while. Under that name, at least.

Rounding out a series replete with obscure narrative connections (and just as many matching fan theories) is no simple task. But the burden of responsibility on From’s shoulders has always felt symbiotically appropriate, given that Dark Souls has helped to reinstate dogged persistence and noble duty in both the thematic and mechanical imaginations of its players.

I’m still grappling with the story implications of The Ringed City, and suspect I won’t reach any sort of conclusion until I’ve seen and absorbed a few thoughts from more scholarly experts of the lore. Despite its title, this second and final add-on doesn’t seem to close the loop on every bit of loose narrative from Dark Souls 3. Instead, it pulls together aspects of all three games for a finale of suitable grandeur and pathos. 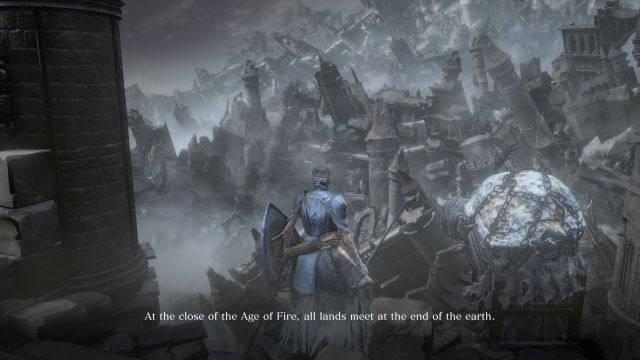 I think we might need to let the city planner go.

The events of The Ringed City loosely follow those of Ashes of Ariandel. Not to the extent that it would fail as a stand-alone piece, but enough to make me suspect that these two separate DLCs were, at some point, a larger whole (like Bloodborne’s Old Hunters). If (or perhaps when) the two were split apart, The Ringed City ended up as the much larger segment of that particular Christmas cracker.

While Ashes underwhelmed a little in terms of pure breadth, The Ringed City has plenty to offer. Twice as many boss fights, and what may be (and, crucially, feels like) twice as much space to explore. There are technically three separate areas in this add-on, though the first is briefer than the second, and the third is mostly a boss arena. In all, it took me about twice as long to finish as Ashes (nine hours, rather than five).

Bare numerical advantages do not, of course, tell the full story. The Ringed City finds a neat balance between going out on a wave of classic Dark Souls moments and showcasing the sort of creative design which earned the series such adoration.

There is, naturally, an extended set piece in which a dragon swoops down and covers a previously safe path with flame. It just wouldn’t be a Dark Souls send-off without such a thing. But there’s also a novel encounter with a solemn giant who summons phantom archers. The latter is a similar test of environmental awareness over brute force to the dragon; though expressed as a different spectacle, and complete with an explanatory backstory for the player to unravel. Phantom archers aren’t just present for convenience, or for a throwaway cool moment. They have a bit of history. This is Dark Souls 3 running with the established strengths of the series and presenting them in new, sometimes surprising, ways. 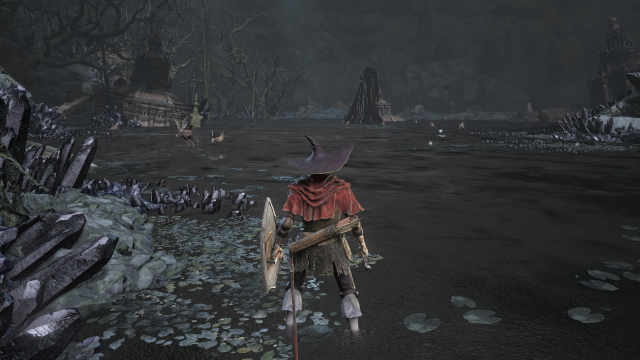 Admit it, ‘swamps’ are a strength of the series.

The opening area takes advantage of Dark Souls 3’s fondness for converging lands to re-purpose and reinvent a section from the second game (which, like it or not, also provides an excuse for yet another poisonous swamp). There are nods to former foes and familiar armour sets to find, but this isn’t a mere retread. Name aside, the land is entirely different. New horrors stalk the dusty pathways and patrol the Dark Sign eclipsed skies. A grotesque set of angelic creatures prove particularly difficult to deal with, until you figure out their secret.

Likewise, while the second section of The Ringed City (taking place in the titular city itself) has enough twisting stairways and streets to recall places like Irithyll or even Yharnam, it too has a distinctive feel. In part due to the unusually idyllic weather conditions (it’s not a nice place to be, but at least the sun is out), and in part thanks to rigorously challenging encounters with eerie Ringed Knights and corrupted pilgrims. Everything in the DLC will put up a stern fight to an end game character (level 80-90 seems about right for this jaunt), without drifting too far into the unfair realms of uninterruptable animations or infinite stamina.

Without getting into ruinous specifics, the bosses too are a delicate mix. Fan favourite Artorias feels just out of view in parts of this DLC, and there’s a punishing one-on-one duel here that, again, is a careful mix of homage and all new material. Intimidating monsters get their due too, as does another NPC-Invader-with-a-health-bar-and-pals. The latter is at first glance the weaker of the four bosses, but has more flair than the Champion’s Gravetender in Ashes and (I believe, since it was hard to tell pre-release) shares an online trait with the Looking Glass Knight and Old Monk. If you still feel ill-will towards him, just know that he gives players an excuse to wear pouffy, open-chested shirts. 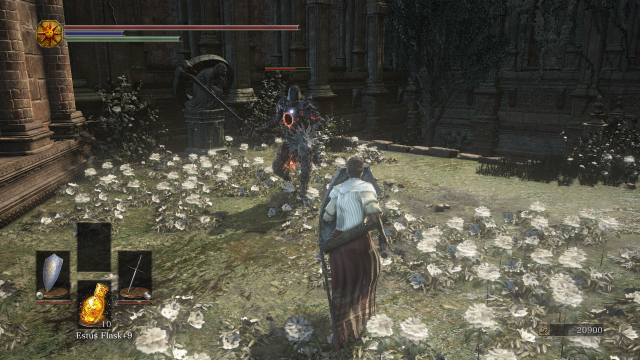 You can also dress up like this guy, but you’ll have to kill him (or his mates) first.

Though it will fall short for people who hope to see every last narrative mystery comprehensively resolved (Dark Souls 3 already played a little too loose with the established ideas for that to be possible), The Ringed City is an unmitigated success in revisiting the mechanical strengths of the series. It actually performs the callback and unique design combo trick more confidently than the main game, which tended to lack nuance in its references. Here, theme and substance from the Souls series crop up several times, but with greater subtlety. Where there is a direct reference or two, they feel earned.

It’s difficult for me to see beyond Artorias of the Abyss as the outstanding DLC release of the series (and, frankly, one of the best expansions of the last decade), but The Ringed City is up there with the best parts of Dark Souls 2’s Lost Crowns trilogy. After multiple releases in a similar vein, FromSoftware are still capable of assembling a piece as grimly beautiful and demanding (in both mechanical skill and exploratory intellect) as ever. It’s tempting to insist they keep making more; but better, perhaps, to trust a studio that knows to step back after a string of spectacular highs.

Tribes of Midgard review — Walking in a winter blunderland