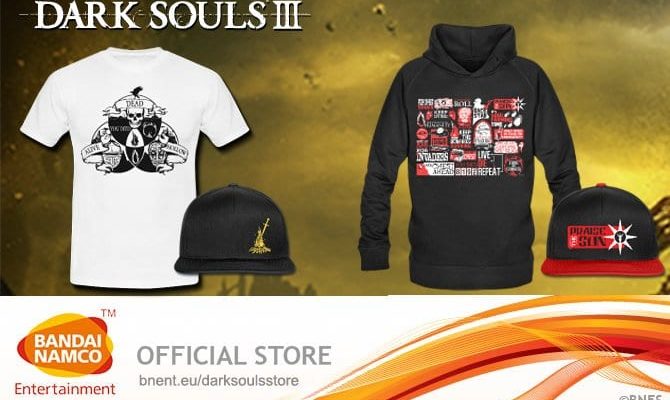 Specifically, a set of hoodies, T-shirts, and baseball caps are now available. I will grant you, there are some nice designs there (the Venn diagram of Alive/Hollow/Dead is quite good, and if I don’t forget about these within 20 minutes then I might well end up buying something because I am terrible with money) but I doubt this is quite what most people were hoping for when the publisher made their anticipation-baiting Tweet.

We have some big #DarkSouls news tomorrow – stay tuned! pic.twitter.com/3WscLpVmJk

I’m also not quite sure what that big news could’ve been if it wasn’t clothing. Um. Did we perhaps think this might be some details on the first bit of DLC? Or maybe they were just really excited about our spoiler-free Dark Souls 3 review, which went up earlier today? Apparently not. Clothes ahead. Visions of clothes. Try clothes. Be wary of clothes.

On the plus side, at least it’s not a hot wings challenge. Clothing lines for popular games might not be what we were hoping for but they aren’t exactly unheard of, while that hot wings thing may go down as one of the weirdest marketing tie-ins of the year.