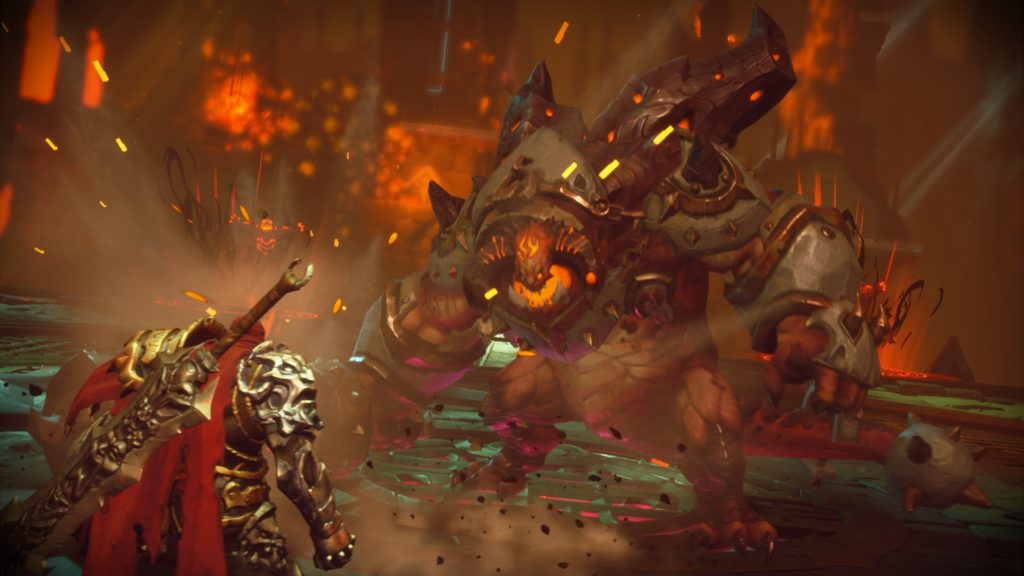 THQ Nordic has never been afraid of experimenting with the Darksiders franchise. Who could forget the transition from Darksiders II‘s swift combat and Zelda-inspired dungeons to Darksiders III‘s slower, Dark Souls-esque boss battles? (I wish I could). Darksiders Genesis is no different, propelling the series into the action RPG genre with its isometric camera angle, emphasis on ranged combat, and focus on co-op gameplay. 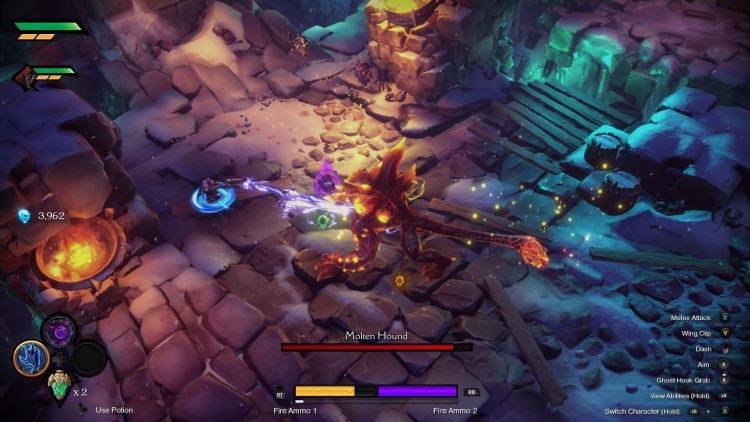 Despite the differences in presentation, Genesis is still unapologetically a Darksiders title, featuring the same satisfying combat, lore-rich world, and soul-hoarding of its predecessors. But this time it lets you share it with your friends… and that’s a damn good time.

The power of the prequel

Darksiders Genesis is a prequel. In a world of conflict, the four Horsemen, warriors recruited by “The Charred Council,” ensure no one being has too much power. When War, Death, Fury, and Strife become aware of Satan’s plot to trigger an apocalypse, they must ensure he doesn’t succeed and offset the aforementioned balance.

While Darksiders Genesis doesn’t take any risks with its story, it’s quite unoffensive as well. Quirky characters, beautiful comics-influenced cut scenes, and engaging dialogue allow for much needed reprieves from its 11 combat-heavy stages. 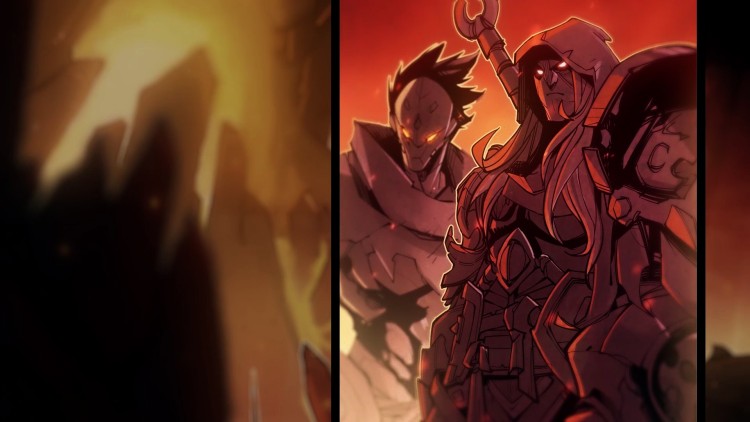 Genesis finally introduces the last playable Horseman, Strife, who is absolutely the highlight. Quick witted, hot-tempered, and imprudent, Strife consistently impresses with funny one-liners and excellent voice-acting. Darksiders Genesis‘ roughly 12-hour campaign just made me wish I got to see a bit more of him in the mainline series, or in this game, for that matter. During gameplay, you manually switch between controlling him or War, or you each play as one character if you play cooperatively.

Despite how much of a departure Darksiders Genesis might be visually from its predecessors, its combat is still authentically Darksiders.

War specifically wields the Chaoseater for the exact same weighty, satisfying combat as in the original — albeit with a few tweaks. Strife, on the other hand, focuses on ranged combat as well as utilizing deception abilities through a decoy. Each character has two primary attacks, a dash, and three unique “Wrath” abilities. These Wrath abilities are charged via gems dropped by enemies and can only be executed when the player fills their wrath meter. While I was initially worried that there would be too much overlap in the gameplay between War and Strife, it ended up being a non-issue as each character had a distinct play style. 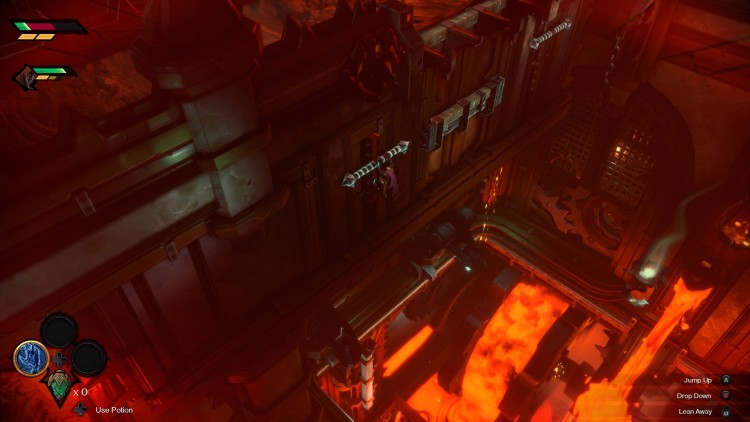 Darksiders Genesis is actually a pretty competent platformer as well, with activating switches and jumping between platforms actually feeling responsive.

Furthermore, War and Strife each have items that can be used to solve various environmental puzzles by activating switches, destroying obstacles, or opening portals. These puzzles often sit squarely between longer scripted platforming set pieces that are more akin to something like from Uncharted than from the previous Darksiders games. Come to think of it, Darksiders Genesis is a solid platforming game in its own right, often pushing you to make increasingly difficult jumps, grab ledges that may seem out of reach, or time your dash just in time as you progress through the depths of Hell.

Strife really does play differently than any character we’ve seen before in a Darksiders game. While he’s quick on his feet and can shred up his adversaries with his “wing clip” melee attack, his primary method of demon-crushing will be with his handguns, “Mercy” and “Redemption.” Throughout the game you’ll inevitably stumble upon countless different ammunition types, enabling things like chaining blasts of lightning or a beam of demonic energy. 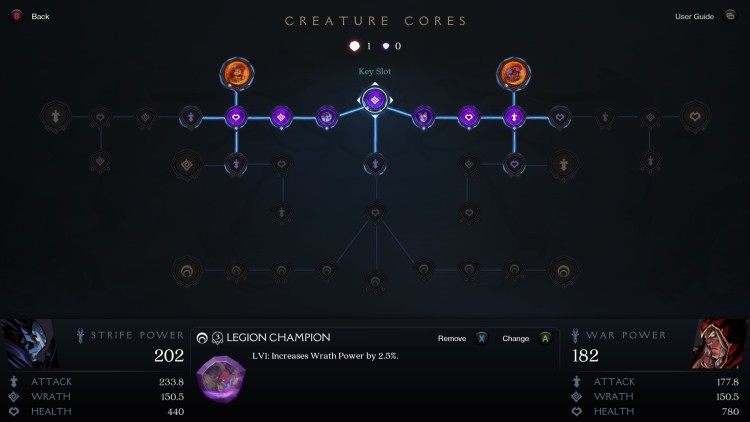 In addition to choosing your loadout of ammunition, the “Creature Core” system allows you to customize both War and Strife with upgrades that you find hidden throughout the levels. This system is actually fairly robust, and you’ll have plenty of opportunities to increase each Horseman’s power to your liking. While the different stages aren’t specifically gated by power level, there is a recommendation for each stage that isn’t very easy to reach by just blowing through the game. Darksiders Genesis begs you to explore, and luckily there is plenty of room to do it in.

In fact, I really wish that I had more time to play Darksiders Genesis. Each level is this sprawling, expansive maze filled with little Easter eggs just begging to be discovered. Airship Syndicate did a lot to alleviate risks of low replayability, including hiding upgrades throughout levels only accessible after acquiring late-game items, hiding a list of unique bosses throughout each level, and creating stages that are are distinctly beautiful. 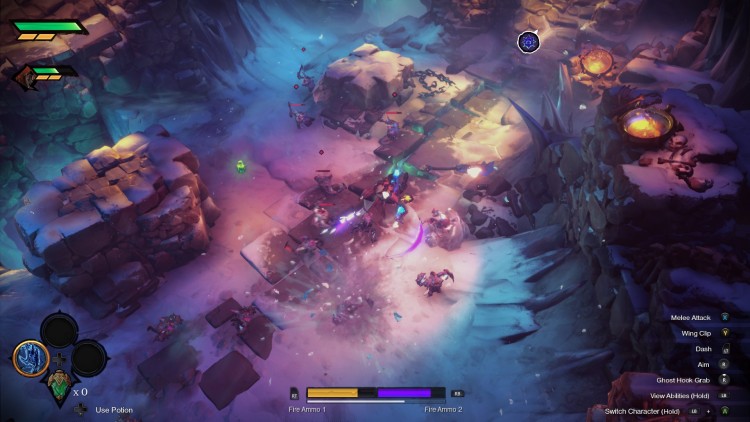 There is still the classic linear arena battling of the series’s previous titles, but there is plenty of room for exploration if you care to look around.

It’s unfortunate that there isn’t a whole lot of enemy variety as the game goes on, but diverse boss battles offset this somewhat. All in all, Darksiders Genesis is absolutely brimming with items to discover, scratching both the looter-shooter and hack-and-slash itch in a really satisfying way. Be ready for your platforming skills to be tested should you choose to explore, because some of the treasure you’re looking for doesn’t necessarily want to be found.

Solid as a stone

Darksiders Genesis plays about as well as you could imagine, its distant character models and minuscule particle effects not requiring a ton of horsepower to deliver solid performance. On my core-i7 6700 machine with a RX 570 4GB and 16GB of RAM, I consistently hit 85 FPS with negligible slowdown at max graphical settings. I was even able to finish the game over Thanksgiving break on an older laptop without a hitch.

Both local and online co-op worked well; however, I did use Steam Remote Play Together and not the in-game matchmaking. It’s noteworthy that co-op is handled split-screen and not simply on one screen, especially considering the amount of screen real estate lost with such a distant camera angle. Nevertheless, I never really encountered any technical issues during my playthrough, and I think that Airship Syndicate should be applauded for delivering an overall well-polished experience. 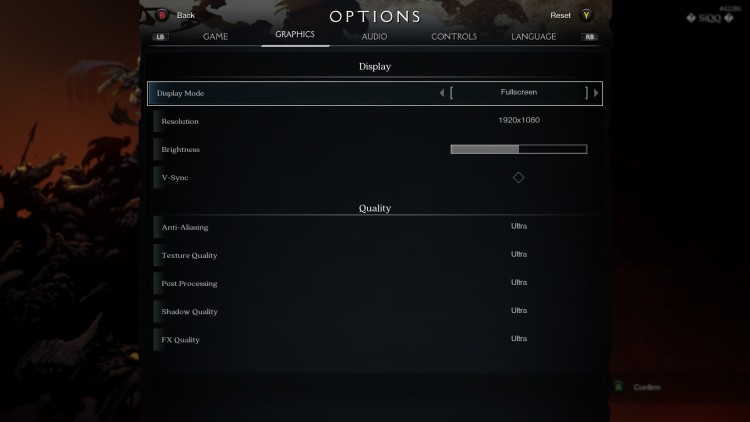 You might not be given many graphical options, but running the game shouldn’t be any issue even on lower-end systems.

I think that Darksiders Genesis is going to be fairly contentious when it comes to reviews. While there is absolutely fun to be had here for both fans of the series as well as newcomers, I don’t think it will be for everyone. Despite the similarities, Darksiders Genesis isn’t Diablo, but it really isn’t Darksiders either. Rather, it’s a unique hack-and-slash experience with a solid foundation that I think is well worth the cost of admission. Drop in with a friend and add a couple of beers and you’ll be in for one Hell of a time.

Darksiders Genesis may be a new look for the series, but it doesn't sacrifice the glorious chaos fans have come to love. Gorgeous visuals, weighty combat, and a surprising amount of replayability make Darksiders Genesis something everyone can enjoy.

By Andrew Farrell23 hours ago
Tech