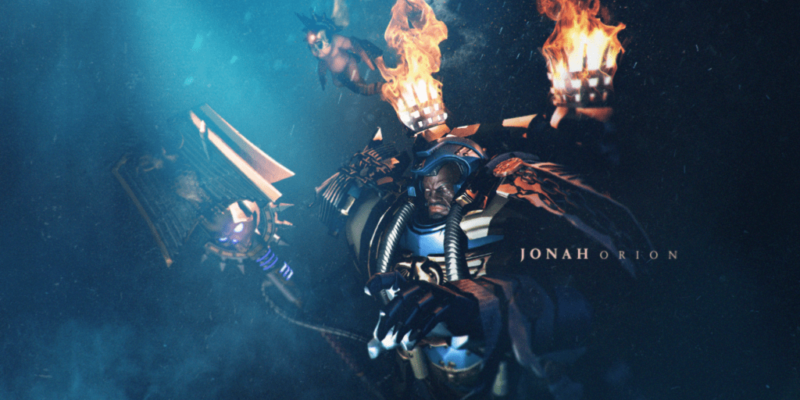 Dawn of War 3 will feature a returning face from Dawn of War 2, in the form of the Blood Raven’s Chief Librarian, Jonah Orion. In Warhammer 40K land (as I’m sure most reading will know), ‘Librarians’ are the Space Marine’s powerful psykers.

This ‘unit spotlight’ piece on the Dawn of War 3 site goes over Orion’s fairly extensive backstory, and takes a look at how he’ll play in-game. He’s a support commander, able to buff friendly units and use crowd control abilities to tie up enemies.

‘Zeal’ increases the frequency of Orion’s attacks while ‘Fury of the Ancients’ allows him to boost the speed of allies and damage enemies by channeling psychic energy “through his cherub-familiar. It’s the 41st Millennium, weird floating baby familiars are a hot fashion accessory, okay? In non-baby-related powers, ‘Emperor’s Light’ conjures an expanding ring of light that buffs allied damage and disrupts enemy vision, and ‘Stonewall’ pops up a barrier that protects Orion from incoming fire.

Stonewall can be combined with some of the other abilities. Using Fury of the Ancients inside a Stonewall ring, for example, will cause it to fill the ring rather than casting in a straight line. Handy for dealing with nearby foes trapped inside the walls of the ring, apparently.

This is all presented in a strangely MOBA-like manner, as if Orion were a Hero from one of those games rather than an RTS character. Slightly concerning perhaps, though I admit I haven’t closely followed DoW 3.

The article linked above also features a full 3D render of Jonah Orion’s in-game model, which you can spin around to take a good look. That can also be viewed separately, over here. Dawn of War 3 is due in 2017.

Batman faces the Children of Arkham in Episode Two trailer