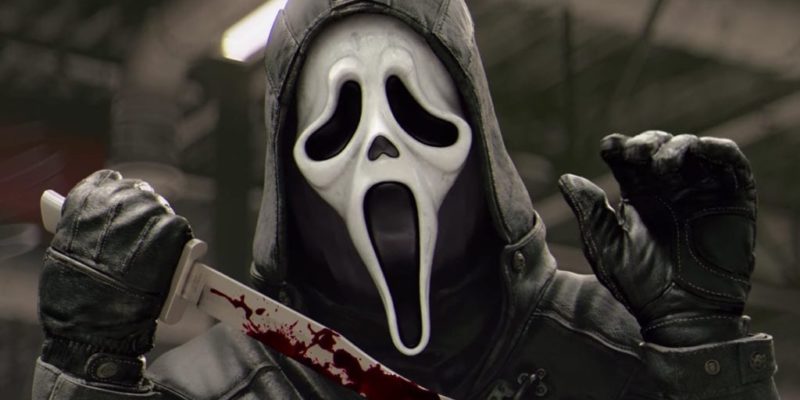 Dead by Daylight continues its dream of collecting every major horror movie villain in one place by adding Ghost Face from the Scream franchise. Ghost Face will be sporting his classic mask from the movies instead of the TV show version. That may be included as a cosmetic, but my guess is that nobody cares enough about that version for it to happen.

A trailer released today to tease an upcoming full reveal of Ghost Face’s abilities and play style. The video opens on a home improvement store’s aisles. The shot pans before cutting to a shopping cart’s wheels being pushed by a pair of black boots. Black leather gloves grip the handle of the cart as the shot cuts to a cashier ringing up the contents of the cart. Rope. Tape. The packaging of a hunting knife covered in blood?!

Ghost Face is revealed holding the knife, which is covered in blood. More frightening than the bloody knife is Ghost Face’s seemingly midlife-crisis obsession with leather. Seriously, he is decked out from head to toe in leather. Leather boots. Leather gloves. Full-length leather hooded jacket. Leather belt. You don’t get a good look, but I’m pretty sure those pants are leather too. I mean, at a certain point, why wouldn’t they be?

The trailer ends with leather daddy Ghost Face casually walking out the store with the tools of his trade (minus the knife that is now lodged in the cashier’s back somehow). He throws some cash over his shoulder because stealing is wrong. Presumably, he enters the parking lot to hop on his Harley Davidson motorcycle grumbling about how horror movies just aren’t the same anymore. The trailer ends on a slate celebrating Dead By Daylight‘s 3-year anniversary and the date and time for Ghost Face’s full reveal (hopefully featuring some of the voice work that made the character so memorable).

For those not in the know, Dead by Daylight is an asymmetrical multiplayer horror survival game developed by Behaviour Interactive. The game pits four survivors against one killer. The survivors have to complete various small tasks like starting generators in order to escape from the killer. The killer’s job is much simpler: kill! The game has proven to be quite popular.

Ghost Face will join Dead by Daylight‘s already decent cast of horror icons and off-brand substitutes that hosts Wes Craven’s other baby: Nightmare on Elm Street‘s Freddy Krueger. Halloween‘s Michael Meyers, Evil Dead‘s Ash Williams, a level inspired by the Saw franchise, and the aforementioned Mr. Krueger are already available as DLC. Dead by Daylight is currently one of the best games for getting your classic horror movie character fix. For many of these horror icons, this is their first game appearance since Mortal Kombat 9 and X.

The Scream franchise is centered around the concept that both the killer and his soon-to-be-victims are aware of the tropes of the horror genre, so it will be interesting to see if that comes into play with Ghost Face’s ability set. Ghost Face’s full ability set will be revealed on May 31 at 3 p.m. EST.