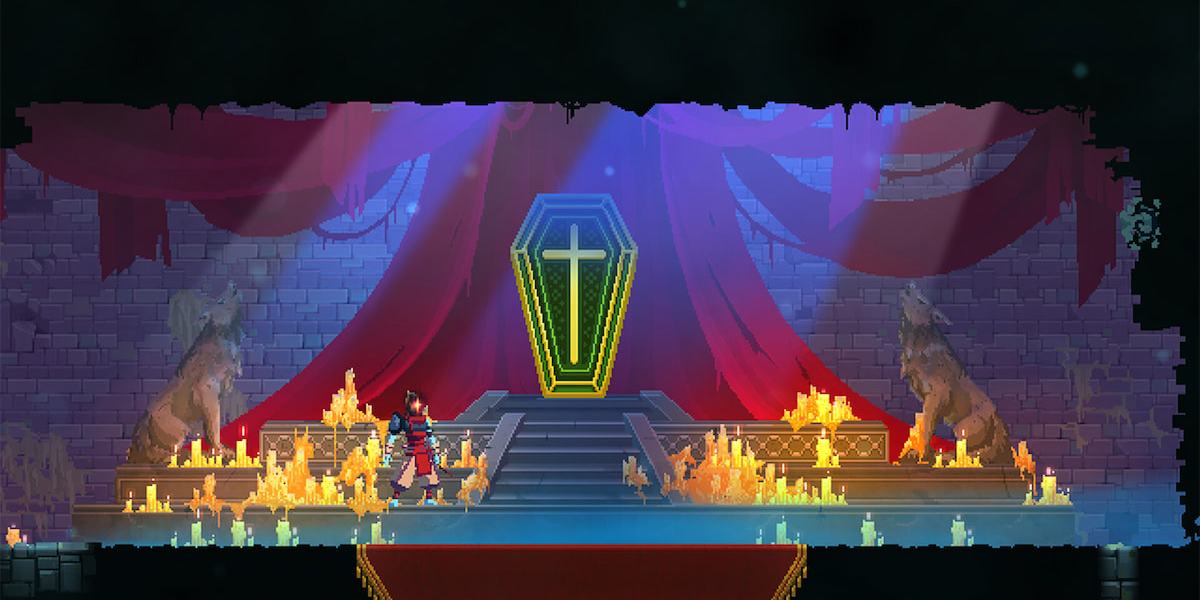 During last month’s The Game Awards show, developer Motion Twin had a pleasant surprise in store for Dead Cells fans. This surprise came in the form of Dead Cells: Return to Castlevania, a new crossover DLC featuring Konami’s eternally iconic gothic action series. Although the announcement trailer did not feature any gameplay, this did little to diminish the hype considering the trailer’s excellent animation and nods to the Castlevania series. Now, Motion Twin has finally shown off gameplay, albeit incredibly brief snippets of it, in a new teaser trailer for Dead Cells: Return to Castlevania.

The trailer begins with a classic “Press Start” screen before fading to a shot of a large castle’s imposing gates. Dead Cells’ protagonist walks up to the gates and attempts to open them before the trailer cuts to a series of rapid-fire gameplay clips. These clips depict the protagonist going through the castle and fighting its monsters using a variety of recognizable Castlevania weapons, which include the throwing axe, the holy water, and the boomerang-like cross. The trailer then cuts back to the protagonist, who thinks for a second before simply walking away in disinterest.

According to the DLC’s Steam page, players can expect to experience a brand new storyline that sees the Dead Cells protagonist teaming up with Richter Belmont and Alucard to defeat Dracula and his army of monsters. The DLC comes with 14 classic weapons, two new biomes, and a whopping 51 music tracks from Castlevania, so fans of the series will likely come away more than satisfied. Additionally, the DLC pits players against three imposing bosses from the series, including Death and Dracula himself.

Even from just the little bit of gameplay shown in the trailer, Dead Cells: Return to Castlevania seems like quite the tribute. You can download this DLC once it arrives sometime during the first quarter of this year.

Killer Klowns: The Game trailer introduces you to the terrifying characters