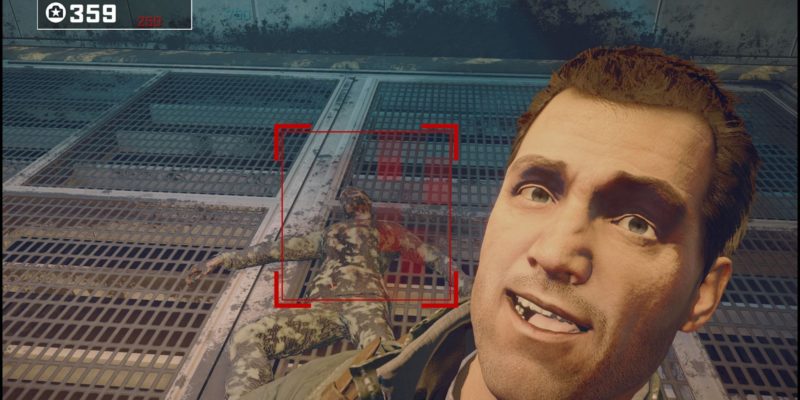 There are whispered rumours that Dead Rising 4 actually released awhile ago, on the Windows 10 Store. These rumours are obviously unverifiable because nobody actually uses the Windows 10 Store. With its recent Steam release, though, now seems a good time to have a look at Dead Rising 4 and figure out if its PC version is a shambling corpse, or the sort of lean and mean beast that runs full-pelt for your face. Which is probably a bad analogy considering most people agree that slow zombies are the better zombies, but shush.

I’m running this on my usual system: an i7-3820 with 16GB RAM and a GeForce GTX 970. As ever, please bear in mind that my computer is apparently powered by a wizard, because it has a tendency to run things it should not be able to run. Nonetheless, this should give you a rough benchmark for how a comparable system will handle Dead Rising 4.

First up, the options, which are wonderfully abundant. Resolution goes all the way from 5120×2880 at 144Hz down to 640×480 at 24Hz, so you’re almost certainly covered – although I’d dread to see someone trying to run this game on a system that has a maximum resolution of 640×480. Not sure if it handles some of the odder aspect ratios, but I wouldn’t be entirely surprised considering the wealth of options it has. 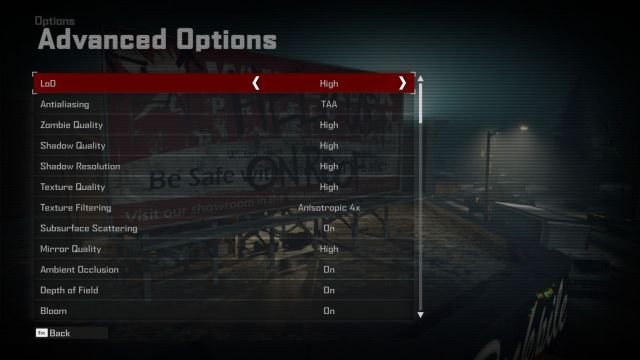 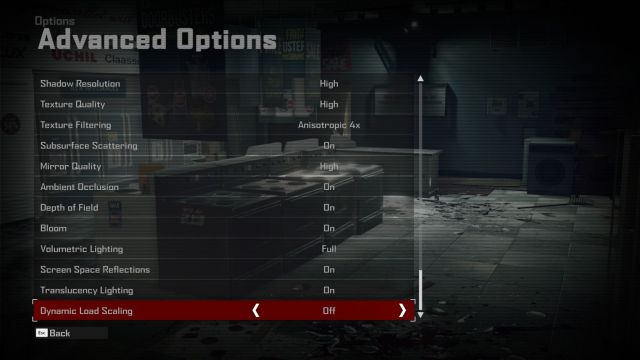 There are a grand total of 16 visual tweakables, ranging from the usual stuff like Texture Quality through to, uh, Translucency Lighting and Dynamic Load Scaling. I don’t really know what those do, and that’s a little disappointing as Dead Rising 4 actually has really good menu help in most of its other sections. Selecting a language has a zombie say (in the text of that language) “Graagh… If you can’t read this… grrrh… you’d better pick another language”, while all of the keybinds have snarky little asides. For instance, highlighting “Move left” displays a tooltip that reads “Scientists have recently discovered that this is the opposite of going right.” A little touch, but a nice one, so it’s a tad disappointing that the options that would actually benefit from some detail are completely ignored. Oh well.

The other disappointment is that there’s no Motion Blur setting, because Motion Blur is awful, and as far as I can tell it’s not parcelled in with another options. Those two little niggles aside, this is an excellent set of options which can be carefully tweaked to your optimum.

We’ll get into how it looks and runs shortly, but first let’s glance at the other options. Audio is basic volume/subtitles. Heads-Up Display lets you turn on or off a number of pop-ups and HUD elements, from tutorial updates right up to having a reticle and minimap on screen; there are enough of these that you might as well have a screenshot. 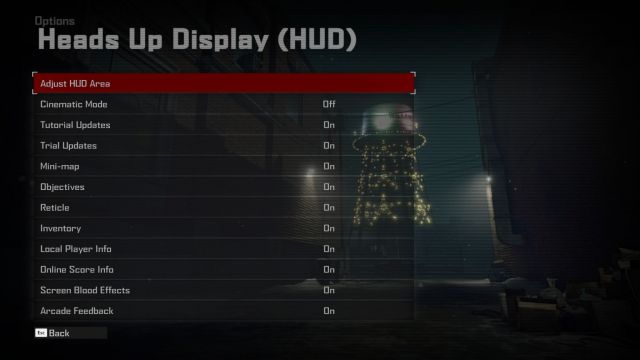 Language offers a wide variety of languages (surprise!) far past the usual, including two types of Spanish and three types of Chinese; while Gameplay offers up the usual control sensitivities along with aim assist, control inversions, and whether you want Sprint and Aim to be held or toggled with a tap. Finally, keyboard settings let you rebind whatever you like. I haven’t experimented a great deal with this as the default keyboard controls seem spot-on to me, but it’s there!

So: lots of options, and I’m really rather pleased with them. Plenty of graphical tweakables, plus keybinds, HUD adjustments, and a bunch of other stuff that’s often overlooked. Really good stuff.

Direct comparison screenshots are quite hard to do with Dead Rising 4 because of the zombie-filled nature of the game and because you have to quit to the main menu for texture quality changes to take effect, but here are a few showing the differences between Very High and Low. 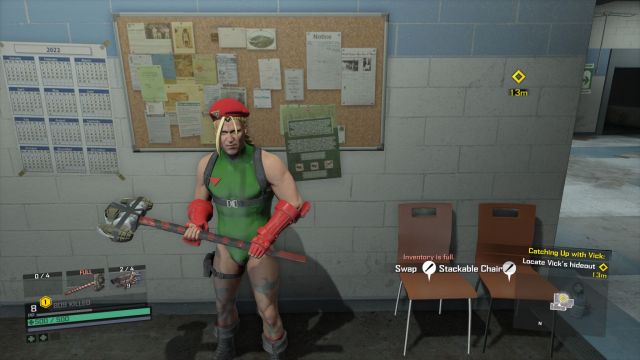 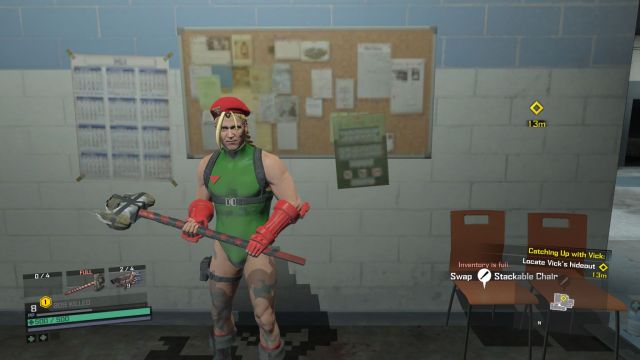 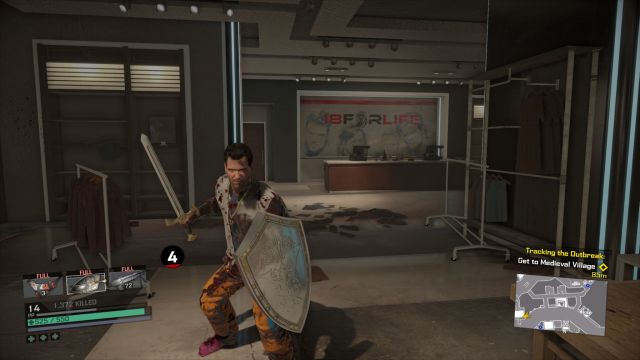 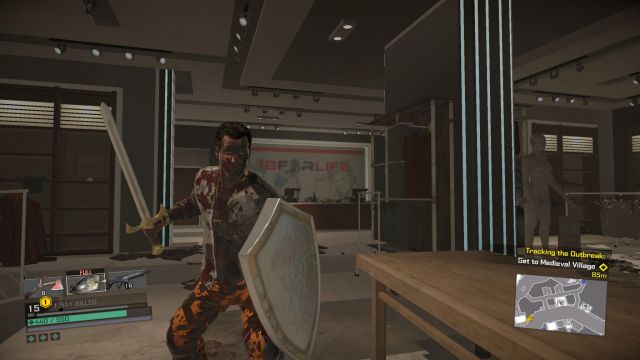 Two things of note are the shadows (which on Low appear to have been stolen from Minecraft) and the environmental texture quality. Low also has a bit of noticeable aliasing (check out the straps on Frank’s harness in the Cammy costume), but the character models and the like are still alright. They do seem almost like they’re pasted onto the rest of the environment thanks to the huge difference in quality, though.

For the hell of it, here’s another Low quality screen showing the game in action rather than a still of Frank. 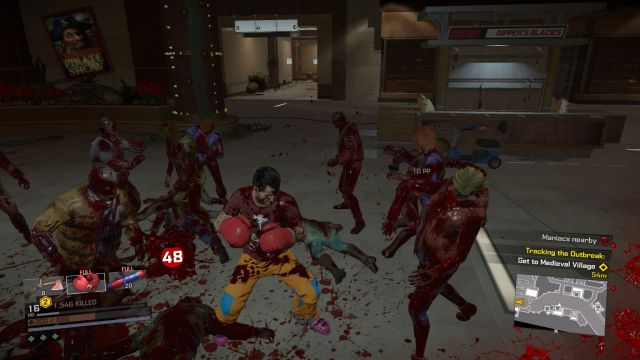 Not great, sure, but not as bad as the non-action stills might’ve led you to believe.

There’s less of a difference around the middle of the spectrum. The other screenshots you’ll see on this page are around Medium/High, and I don’t think there are any particularly huge differences between them. In a non-screenshot sense, there is a bit of pop-in on the lower end of things (an item halfway down a corridor faded into view as I approached it, and on Low, store marquees notably fade from incoherent blurs to readable textures as you approach) but for the most part it’s the shadows and the environment textures that have the biggest changes.

I’m hard-pressed to say that Dead Rising 4 looks particularly great, though. I mean, it’s fine: even on Low, zombies explode into wondrous amounts of gore and the blood-splatters soaking the clothing are really quite lovely… which is a sentence you probably shouldn’t say out loud in public. I think it’s more an issue with the game’s art style than anything, because unlike most Dead Rising games, Dead Rising 4 is – so far – unrelentingly grey. It’s quite a departure, and not one I’m too keen on. 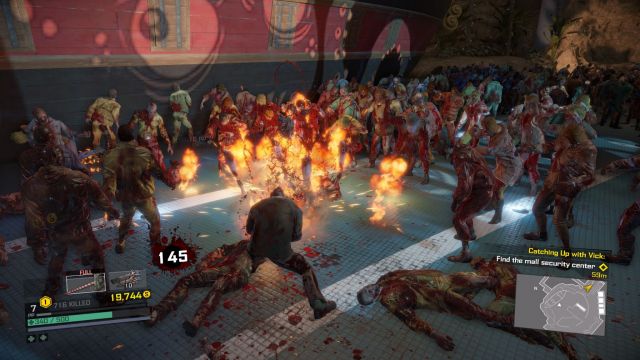 Although it obviously looks a hell of a lot nicer on Proper Quality. And no, this doesn’t really impact the framerate much that I noticed.

It’s worth noting that even the 50FPS bits seemed to be running really well. This is either down to the way it handles frames, or it’s G-Sync doing its impressive trickery to fool my eyes. Either way, it’s within the region I’d consider playable.

It controls just fine, too. I haven’t even bothered trying a gamepad simply because the mouse and keyboard controls are great. There is a weapon wheel (several of them, actually) but taps of 1, 2, and 3 swap between your throwable, melee, and ranged weapons respectively, so the only time you need to dip into the wheel is to combine weapons… which you can generally do just by holding E when near to an ingredient that’s not in your inventory anyway. Otherwise, any three-button mouse can handle just about everything you need. The only iffy part of controlling it on a mouse and keyboard so far has been trying to steer a vehicle, but if memory serves, that’s never been Dead Rising‘s strong point on any control input.

Gamepad controls aren’t manually rebindable, but there are a bunch of different presets that… probably work? Look, I don’t know; I don’t use a gamepad if I can help it. I was tickled when I saw this loading screen, though: 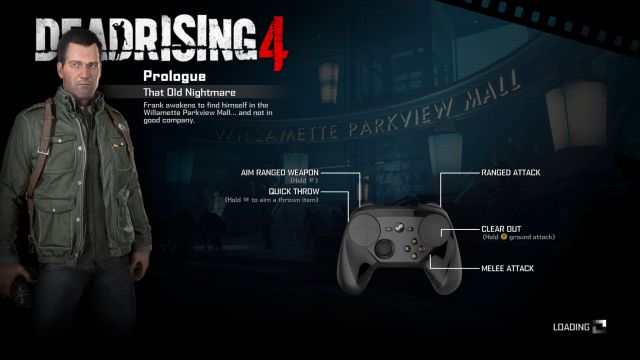 Three quick and relatively minor issues with the PC controls. Firstly, one tutorial (combining weapons) got a bit confused when I wasn’t using a gamepad, but luckily it was incredibly easy to figure out what to do. Secondly, one pop-up told me to press the Back button to check something, which is not a button I have on my keyboard. Third, one of the unlockable skills makes the controller vibrate when a particular collectible is nearby… which isn’t much use on a mouse and keyboard. Hopefully that has some sort of visual or audible indicator too, or that’s going to be tremendously useless on PC. I mean, I once tried combining my mouse and a motor, but the last time I saw that mouse it was rocketing through the sky while making a noise that sounded like the mating call of a lawnmower. 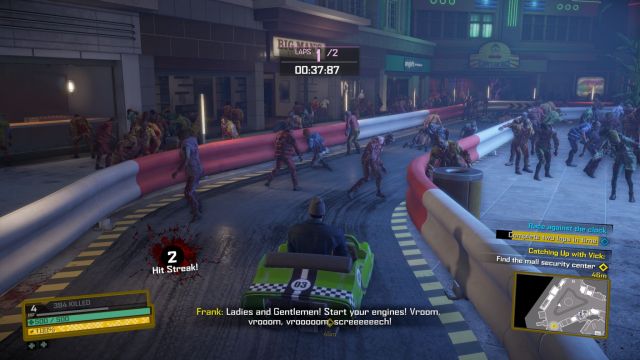 On the plus side, despite looking more grey and gritty than usual, Dead Rising 4 still has tremendously silly bits even early on.

So! Good options, good optimisation, good controls, iffy art direction. I’m also a little uncertain on the game itself, honestly. I’m happy to be back in Frank West’s shoes, but based on the early chapters, a lot of what made Dead Rising into Dead Rising appears to have been stripped out. No time pressure, no escorting, significantly more linear (although it may just feel that way because there’s always an objective), and so far at least the Maniacs have been both less threatening and totally lacking in horrific intro and death scenes. On the plus side, combining items into improbable weapons and using them to bash the unliving shit out of zombies is still as chunky and brilliant as ever.

Unsure if I’d recommend the game just yet, then, but if you know you want it then I’d happily recommend the PC version. Nice work, Capcom.

By Blake Grundman4 hours ago
Reviews

By Blake Grundman8 hours ago
Reviews