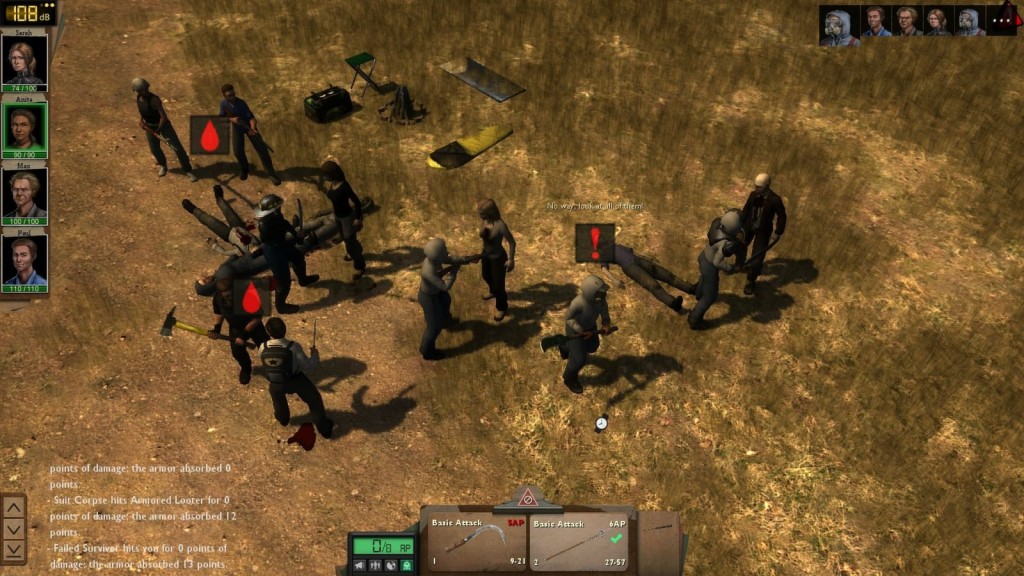 DoubleBear Productions’ top-down, dialogue heavy survival RPG Dead State has escaped the grasping hands of Early Access and now exists as a released Steam game. Look, here it is on the main store page and everything.

Dead State, developed by former Troika and Obsidian staff (including Bloodlines writer Brian Mitsoda,) raised just over $330,000 USD through Kickstarter, back in July 2012. The Fallout-esque title then made its way to Steam’s Early Access program in February of this year.

It’s now at version 1.0 and considered by DoubleBear to be fleshed out enough to constitute a “full” release. That doesn’t mean development has ended, but it does mean that the game actually has endings now. I know this because the patch/update notes for 1.0 were posted on Steam too.

Here’s what to expect from the release build:

– Added endings!
– Added primary achievements, more soon!
– Added correctly sized GUIs for all screen resolutions.
– Improved and added GUI elements, such as the proper Memorial Wall, Suggestion Box, and Pop-Up GUIs.
– Added ranged weapon mod jobs.
– Added car upgrade jobs.
– Added car trunk functionality.
– Improved and fixed loot, art, combat, and more on many levels.
– Improved and fixed many dialogues.
– Improved and fixed multiple ally perks and traits.
– Added remaining data items.
– Fixed ‘instant item creation’ bug.
– Fixed combat soft locks related to AI weapon switching.
– Fixed missing or incorrect armor effects.
– Fixed player character receiving infected status – now 100% immune.
– Added special song to ending credits.
– Capped ally mood maximum values.
– Fixed a crash that occurred during pathfinding.
– Adjusted job board hours to only track hours that can be worked, not overall time to completion.
– Adjusted balance of morale and daily morale drain – This is ongoing and will continue to be refined.
– Fixed several issues related to AI and the use of stairs.
– Enemy AI has been taught how to use thrown weapons and grenades.
– Added a greater variety of portraits to chose from in Character Creation. (Custom Portraits are still WIP.)
– Fence is now fully healed when selecting the Mechanical 10 perk.
– Fixed issue with triggered events on some levels.
– Generator will now work if fueled by 8AM.
– Based on community feedback, the Shelter generator can now be turned off by interacting with it in the basement.
– Improved visuals on grenade weapons.
– Reduced parts output of the Recycler upgrade.
– Allies attacked by the player will now fight back.
– Changed the effects of “Doctor” and “Nurse” jobs to provide a flat bonus to healing rate.
– Allies can now be assigned to rest in the Infirmary without a Doctor or Nurse on duty for a 10% per day healing boost.
– Ally death reaction dialogues now trigger on returning to the Shelter.
– Infected ally death scenes now play correctly.
– Allies now react to attacking and killing neutral NPCs while scavenging. Reactions vary between allies and depending on who witnessed the killing, and may result in morale or mood loss.
– Updated the game manual.
– Fixed some issues with the tutorial text.
– Ally inventory is no longer destroyed when allies are killed at the Shelter – their Inventory contents are now automatically moved to Shelter storage.
– Max Getz is no longer available for talking between his arrival to the shelter and waking up.
– Improved look of armors and weapons.
– Final Music added to dialogues and levels.
– Davis can now ration food for the shelter if asked.
– Allies react to intra-party attacks.

IncGamers Plays I am Bread