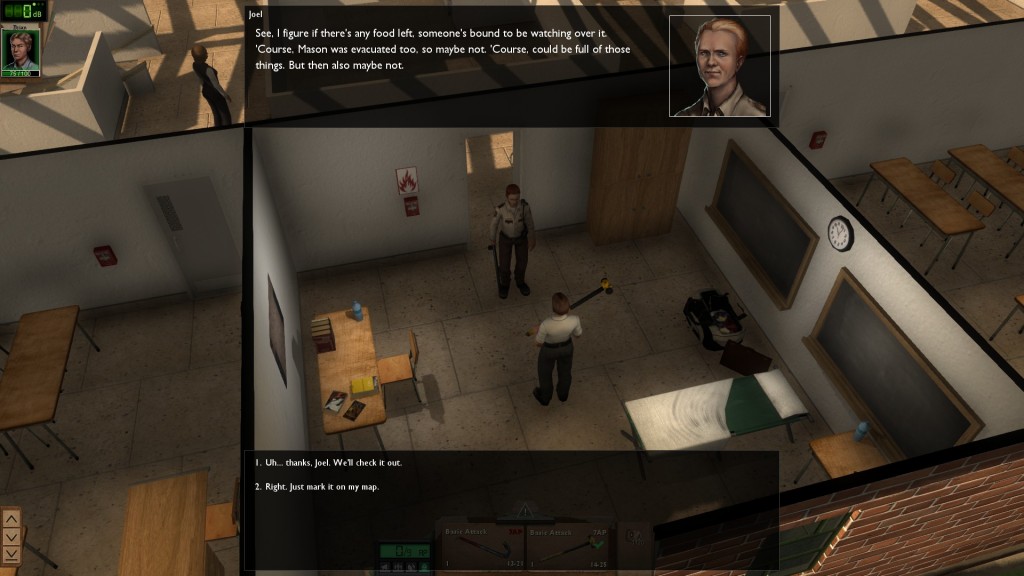 As promised earlier, the mighty Patch 4 for Dead State has been released into the hands of you Early Access and Backer types.

The short list of stuff added to Dead State is: there’s an intro showing what you were up to prior to waking up in the Shelter, there are penalties for night-time combat and staying up late, there are adjusted healing mechanics and a recycling upgrade, there’s been a lot of balance done to combat, and there are a host of the expected tweaks and fixes.

The long list of stuff added to Dead State is too long for me to put in a sentence, so I’ll just copy/paste the changelog in below.

Added a new intro sequence:
What exactly happened to you before you woke up in the Shelter? Time to find out!

Changed night-time behavior:
You no longer lose the game for staying out past midnight. Instead, nighttime combat penalties are applied after 8 p.m.; staying out past midnight causes the fatigue status; and staying out past 3 a.m. now incurs a -50 morale hit, 50% health loss to all members of the party, and kicks you back to the Shelter. If you’re using horses, they become exhausted and unusable for a couple of days, and if you’re using the car, it breaks and you need to repair it again. (In other words, get your butt back to the Shelter before 3 a.m.!)

Added a Recycler Upgrade:
By popular request, you can now build the Recycler Upgrade to break weapons and armor down into parts. This will most likely need balancing work, so make sure to share your feedback with us on the boards and forums.

Updated level visuals:
We improved visuals in over 70 levels.

Updated level loot, combat, and events:
A number of levels received combat and loot passes, and we even added some more random events.

Implemented and fixed perk effects:
New perk effects for Animal Magnetism, Pharmacist, and Gardener were added, and some existing bugged perks were fixed.

Added more Lore items to various enemies:
Note: there’s a known bug with the Lore system right now that will be resolved in the next patch.

Added ability to obtain cats for the Shelter

Added ally deaths from antibiotic shortages:
Known issue: camera data isn’t in yet, so consider these WIP for now.

Changed fence job behavior and text:
We changed the title and description text on the stone-reinforced fence job to more correctly reflect the nature of the upgrade.

Added additional infirmary polish:
Characters teleport to the infirmary when they’re injured and even lie down in the beds.

Added new ‘select all’ buttons in the shelter

Right, that’s your lot. Get out there and crack some zombie heads – or alternatively, just wait until the game launches on 4 December.

Warlock 2 competition winners have been picked