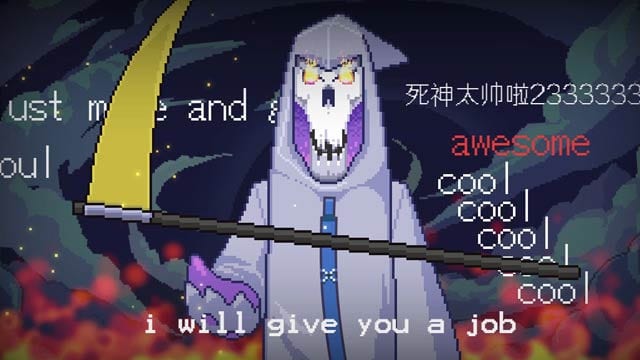 As soon as I heard about Death Coming I knew I had to check it out. Any game that makes you play the bad guy is always worth a look. In Death Coming, players join forces with the Grim Reaper to bring complete misery to small cartoony characters going about their business in different strange scenarios.

Death Coming is at its heart a puzzle game with a sinister side. The game is played from a top-down isometric view, and, as you look down on the world, the idea is to kill as many of the innocent characters as possible in cunning ways.

The game is separated into zones on a world map with each zone featuring a location where you have you carry out your evil doings. These locations are really strange. For example, the second location is a bomb factory where you have to make sure the weapons of mass destruction are built to completion. The Reaper really is a bit of a bastard. 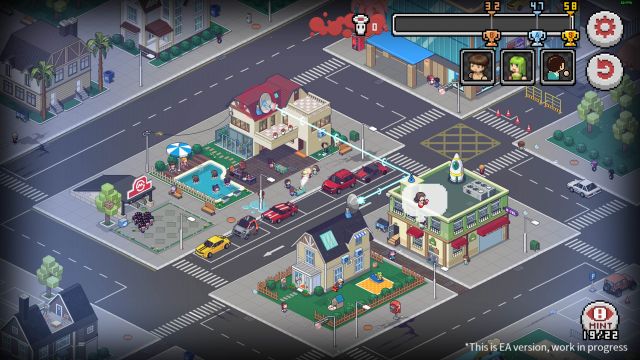 So many lovely innocent characters to kill

It’s at this stage the game hots up as new elements are added to the gameplay and extra objectives such as killing key targets are added. Take the bomb factory as an example. The factory is run by a dictator and you need to try and kill off some key characters in the factory including spies that are trying to stop the bomb being built. It gets even weirder; the dictator has a side room which can best be described as a sex dungeon where he goes for pleasure if you open up a hidden bookcase. There is actually an objective tied to this strangeness. 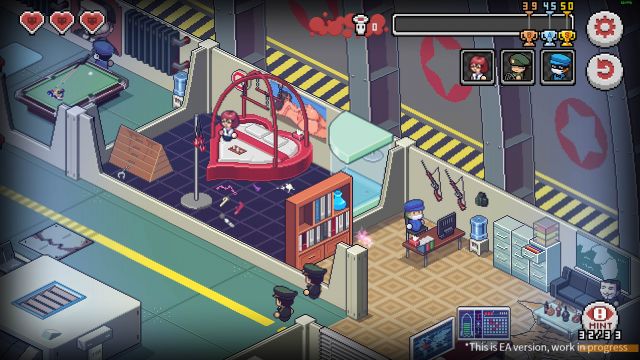 This is what a dictator’s sex dungeon looks like apparently.

To make your role as the death bringer more difficult, angels or ‘police’ are occasionally deployed by the game into the level. These guys float around patrolling for evil actions. Make something terrible happen in their line of sight and you get a strike. Three of those and you’re out and it’s time to reset and start again. 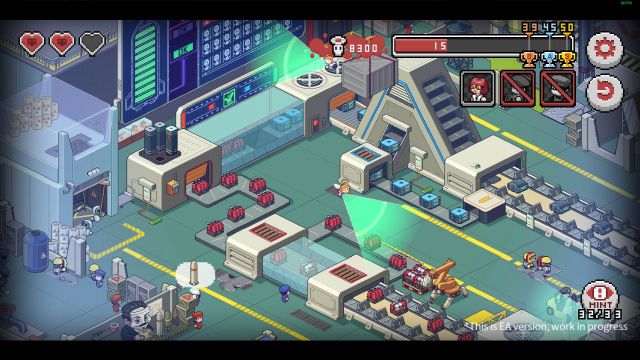 The pesky angel police drop in

The gameplay is really simple. Players need to click and trigger objects in the world to either directly kill a character or trigger an event that could kill a character, assuming everything is timed to perfection. A kill meter in the top right of the screen indicates how many you need to kill to move on to the next level. The more kills you get, the higher the score, which then ranks you on a global leaderboard.

Some of the trap situations are just as strange as the sex dungeon. A giant mushroom plant can knock museum visitors into a monster’s tank, a T-Rex that can be summoned to stomp around the museum, and, hey, why not revive Dracula for the hell of it and watch him suck the life out of museum visitors? It gets better when you realise how bad some of the translated text is which only adds to the game’s quirkiness.

Death Coming is a really weird but clever game. When you’re presented with so many different ways to kill characters on a large map with all kinds of clickable objects from coconuts to flying carpets it makes you try to figure out what the developers were thinking. This is what I’ve really enjoyed the game. I felt like I was trying to get inside the heads of a bunch of slightly unhinged developers. When I did figure it out how to kill as many characters as possible, I was rewarded with cries of “Double Kill!” and “Triple Kill!”. How jolly.

With its quirky cartoony graphics and cheerful audio, the sheer horror of what you are doing is completely lost as you play. We all know dropping an air-conditioning unit on a pedestrian or dropping electrical cables into swimming pools is not the done thing in polite society, but Death Coming manages to keep you thinking and engaged with this strange cartoon world. Well worth the asking price of £4.99.

A great puzzler with a sinister twist. Embrace its strangeness.