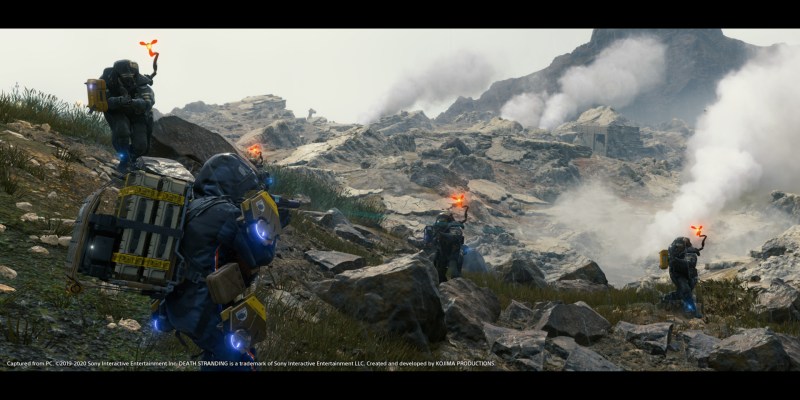 Death Stranding doesn’t need much of an introduction at this point. You’ve heard of it and you’ve seen how divisive it was when it launched on the PlayStation 4 last November. Eight months later, I can’t say much has changed for it as a game. However, this is an excellent PC port of a great game. Well, depending on what you consider great, at least. Simply put, if you like games about delivering packages and cargo, Death Stranding can scratch that particularly odd itch. If that sounds boring and asinine to you, it probably won’t.

Somebody give Kojima an editor

Hideo Kojima’s storytelling is always a sight to behold. The man undeniably has quite the eye for spectacle. He also doesn’t care much for subtlety, and sometimes his stories become so absurd that they’re impossible to take seriously. Death Stranding marries these two extremes and jumps back and forth between them constantly. You play as a man named Sam, who is a porter or package deliverer. Sam builds bridges sometimes. Naturally, Sam goes by the name Sam Porter Bridges. See? No subtlety.

The rest of the cast is named similarly: there’s the former mortician named Deadman; the package deliverer with an unnaturally aged body called Fragile; the head of the company Sam works for, Bridges, is known as Die-Hardman and he always wears a black skull mask. I don’t get it, either. The game’s setting and lore are both interesting and rather unique, but the actual story beats are so childishly direct that they made my brain hurt. 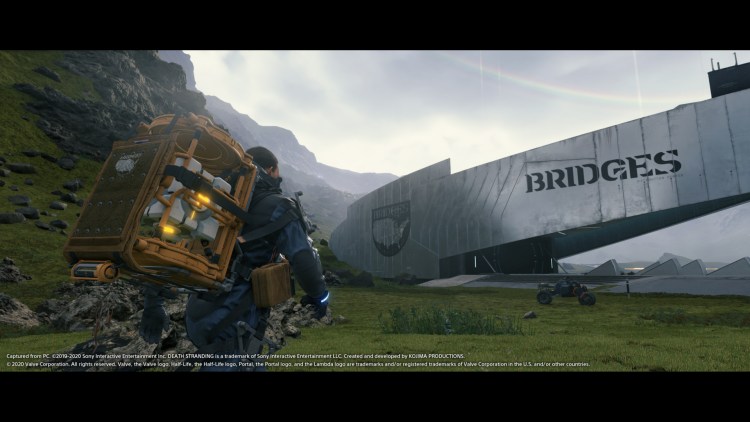 See, Sam’s mother is the president of the United States. He goes to visit her on her deathbed because she wants him to help reconnect America, which has been torn apart by an event known as the Death Stranding. She dies and is then replaced as president by her daughter’s hologram. Yeah, alright. Her daughter has been kidnapped by extremists and your ultimate goal is to rescue her. But the day-to-day gameplay sees you extending a network to different places all over the country by connecting them all with an anti-gravity necklace.

Deliver us from sin

Now that we’ve got whatever all that is out of the way, let’s focus on the gameplay, shall we? Early on in Death Stranding, Sam walks around on foot as he accepts orders to take from one outpost to another. Out in the world you come across packages and materials to collect. You typically carry everything on Sam’s back, but can also attach a single small package to each shoulder and hip. Later on, he gets access to vehicles that can store cargo as well, but going on foot is the best way to deal with all manner of terrain.

Each package Sam carries is physically represented on his back. Carrying a lot of cargo will lead to him holding a comical amount of stuff that can be knocked off the top if you’re not careful. Much like the game’s narrative, it’s all interesting yet unabashedly silly. But I like games about delivering cargo, so the gameplay here is right up my alley. When Sam is walking, he’ll often need to grip the ground more carefully to not lose traction. Otherwise, he can fall and damage his goods. 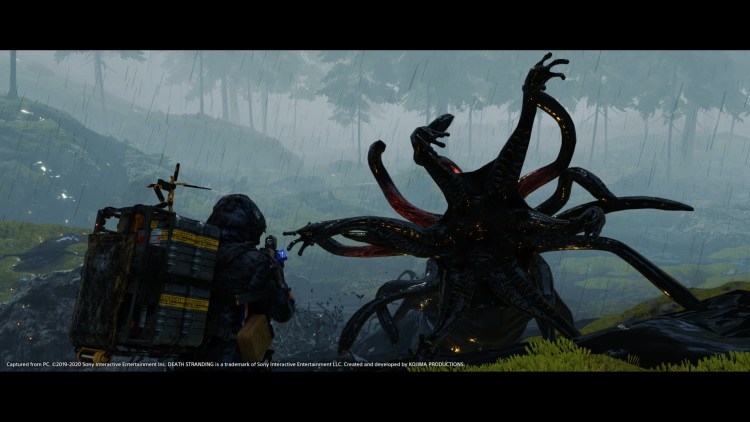 To make traversal easier, he can 3D print a host of tools to aid him. The most commonly used of these are the rope and the ladder, which can be placed around the environment to make difficult-to-reach areas more accessible. Death Stranding also has a device that can be printed that allows Sam to build several structures, such as generators to charge vehicles or power skeletons used to carry more cargo or run faster, zip-lines, and post-office boxes for stashing cargo.

One world, one vision

Whenever you place tools or structures in Death Stranding‘s world, other players will find them in their game. You can also put down hints and helpful holograms for other players to find, too. It makes the game feel very connected despite there not being actual co-op. It’s a really neat feeling, actually — to be making a slow trek while carrying way too much stuff, only to find that someone else has placed a ladder that’ll make your trip a bit less taxing.

Whenever you see such things, you’re able to “like” them. Yes, as if you were on a post-apocalyptic social media platform. You can also spam the hell out of the like button until the cut-off happens. Structures or items in really useful places can get tons and tons of likes from fellow players. And it all ties in very well with Death Stranding‘s theme of connectivity.

The obsession with likes also extends to when you turn in cargo, as you’ll receive them from clients as well. Sam can undertake both story orders and side ones. Story orders obviously move the plot forward and side ones are optional, albeit very much worth doing. Each outpost has a star rating associated with it and completing deliveries increases this rating. Many outposts will grant you enhanced item blueprints for 3D printing or extra items for hitting milestones. Plus, Sam’s abilities get leveled up for completing orders as well. You can increase everything from his carrying capacity, to balance, and even how many times you can like a structure. 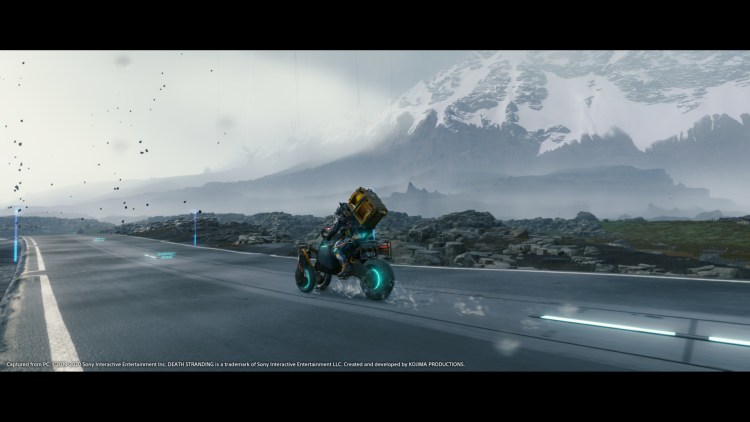 Death Stranding is quite a strong port on PC. The game ran well on my rig, although it can be fairly demanding even if you exceed the recommended specs. It has a bevy of options, including some you don’t see very often. The game has a very specific sharpening enhancement feature, even if it doesn’t do that much for the environments. These environments are broken into three regions, but you’ll be spending the vast majority of the game in just one of them, as it’s very large.

While the character models are incredibly lifelike and detailed, the environments look more dated than I’d expect of a modern AAA title. It doesn’t look bad, mind you, just more basic than I would have imagined, with some unimpressive texture work. The draw distance is something, though, and there there are occasions where you’ll want to stop just to gawk at the scenery.

Death Stranding also has a fair amount of combat. Fights come in the form of humans that want to steal your cargo, and BTs, invisible dead creatures that you can only spot with the help of the premature baby you carry around with you. I’m not going to elaborate on that. The combat itself is kind of clunky, but it’s fun to trip and bind enemies with a bola gun and kick them unconscious before stealing all their stuff. It’s better to sneak past the BTs, though, as getting detected by one will turn the ground into oil and summon a creepy oil whale or something. This is a strange game. 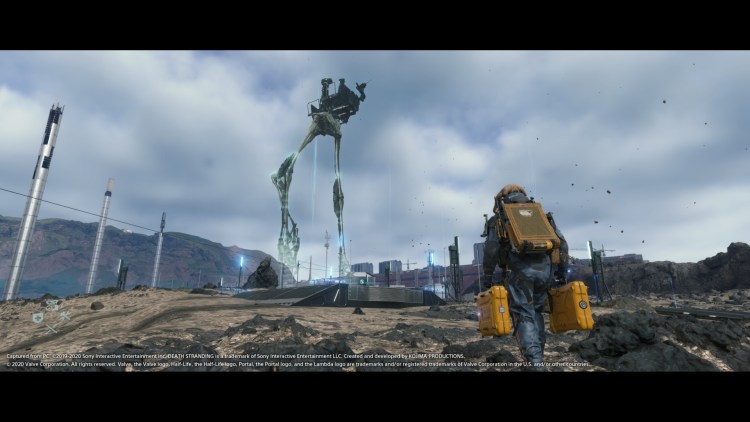 I honestly enjoy Death Stranding the most when the characters aren’t talking. It’s a big, unique game with a lot of attention to detail that you don’t see often. This port is high quality, and the game itself is lengthy and incredibly different from almost everything else on the market.

I’ve frequently seen people say they’re Kojima fans and ask if they’d like this too, only to get told that it’s nothing like his other games. But I strongly disagree with that. The game’s structure and the way many of its systems work is very much like Metal Gear Solid V. So if you liked that game and you like delivering cargo, I’d certainly recommend picking this up. Just try not to focus too hard on the bizarre plot. 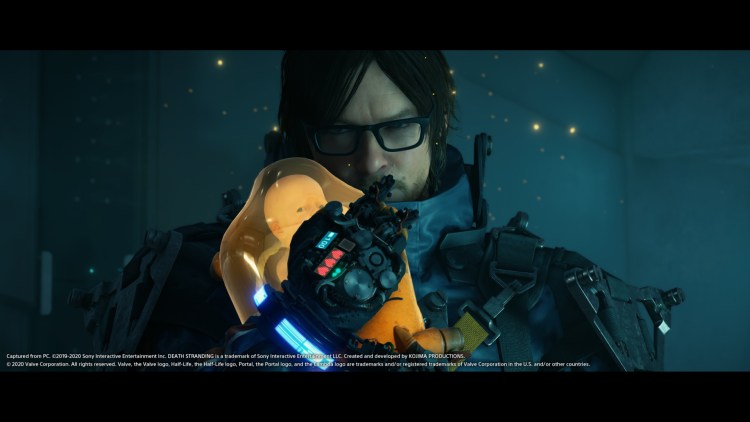 Death Stranding is an excellent game with a lot of content and a ton of unique angles. The story is straight-up dumb a lot of the time and things can get tedious and clunky, but the thrill of exploration and making your own way overcomes all obstacles. Just like. Ugh. Sam Porter Bridges.

By Martynas Klimas24 hours ago
Reviews