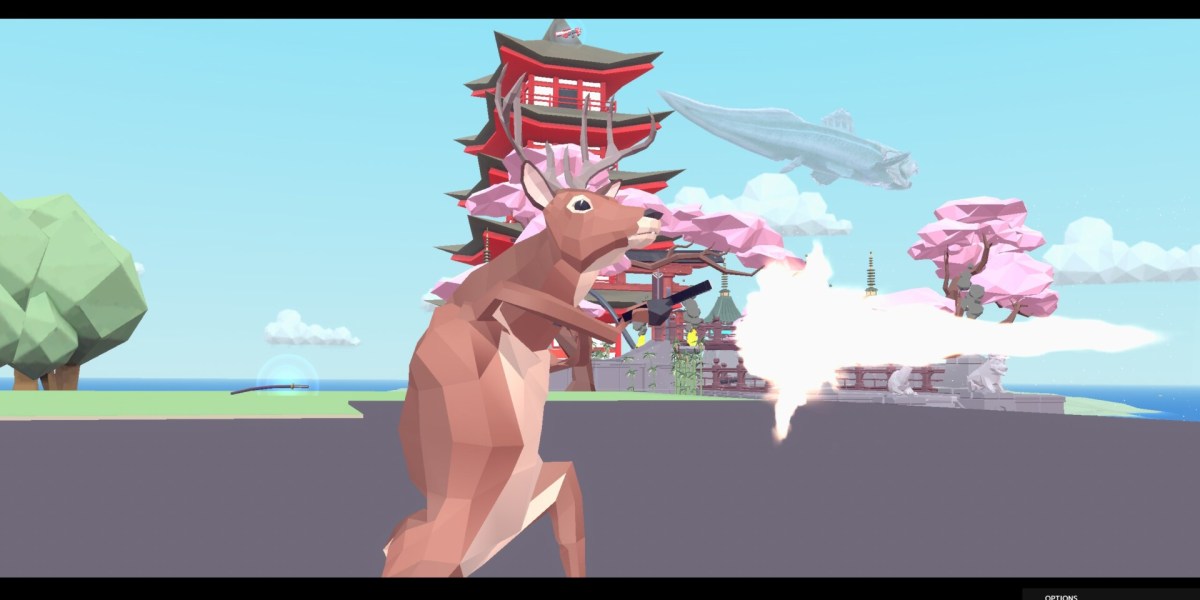 I see the term “meme game” thrown around from time to time. Generally, it’s a bit of harsh thing to say, as it often diminishes the hard work of a developer. DEEEER Simulator, on the other hand, is a meme game, make no mistake about it. While it certainly has moments of amusement, there is practically no content here and next to nothing has been added to the game since the Early Access version, save for a final boss encounter at the very end, meaning that the game can and will be typically completed in less than an hour.

DEEEER Simulator begins with a character creator. It has a surprising amount of options in regard to letting you shape your human avatar’s visage. Immediately after you finish, your character pushes a deer out of the way of a car and dies on impact. The game then asks if you want to be reborn, at which point you find yourself controlling a deer in a tiny city. There are other elements on display, such as time travel and giant robots, but not much happens within the game’s minuscule runtime.

Some will find the game quite funny and I’d be lying if I said that none of its shenanigans surprised me or made me crack a smile. But I mostly got the sense that the game was trying too hard to be random and funny, like a cringey middle schooler who goes out of their way to act strangely in order to show off how “different” they are. As such, I didn’t find DEEEER Simulator to be particularly funny. There isn’t much in the way of comedic timing or anything approaching actual humor, it’s just a collection of surrealist nonsense that screams, “isn’t all this totally weird?!” 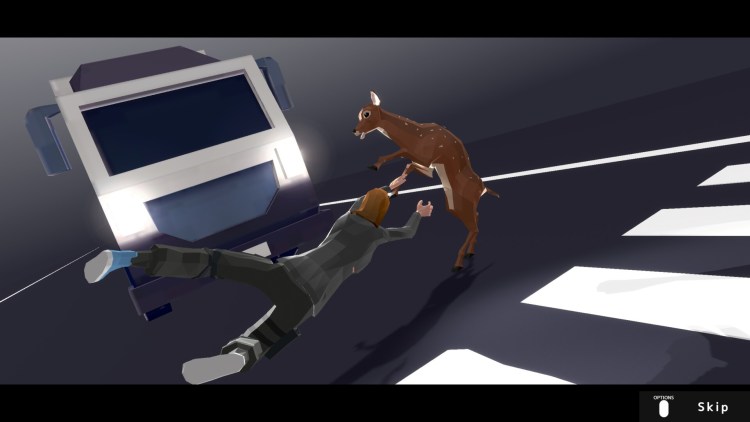 The game’s structure is simple. There are two small sandbox cities, one in modern day, one in the future. Your goal in each is to destroy buildings, which fills up a letter in the upper-right-hand corner of the screen. Do enough damage and you’ll change your ranking all the way from E to A. Each time you hit a new ranking, a wave of enemy police spawns to attack you. Prior to you defeating the wave, you’re not meant to be able to increase your rank and summon the next, but DEEEER Simulator bugged out a bit and I fought two waves at once.

What’s interesting is that you can edit the number of enemies that spawn per wave. The game does nothing to stop you from piling this to ridiculous heights, to the point that you can easily turn the game into an unplayable mess due to all the models on screen. Enemy waves are distributed between sheep, polar bears, rabbits, and a boss fight. It’s basically like someone took the meta game from Grand Theft Auto about causing destruction to bring increase police heat levels, but this time it’s wacky.

The deer’s abilities are honestly quite amusing. You can run around as normal and use a hoof stomp. Holding a button will see the deer stand upright, which you can use to quickly run around the environment and use weaker, but quicker melee attacks. The deer can jump, but the jump feels awful and floaty, and the deer has a tendency to ragdoll at the slightest thing. Controlling it can be a bit of a pain at times. At first, you’ll need to destroy buildings simply by walking up to them and hitting them with your hooves. Those are some hooves. You can also stretch the deer’s neck to grapple to points or attempt to swing around like Spider-Man. 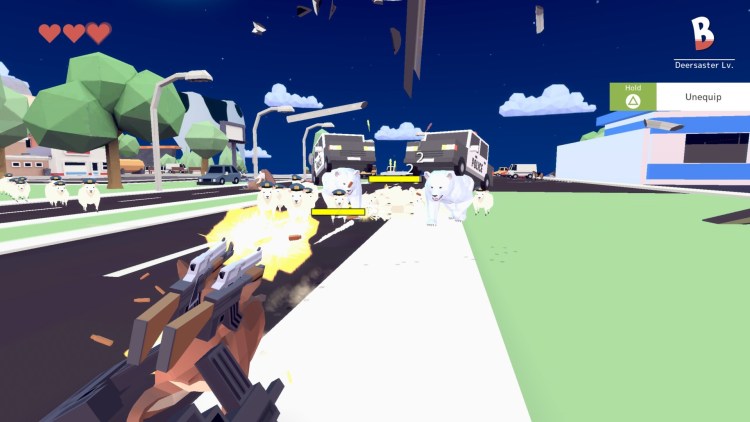 Deer of the dark

After destroying a building, you’ll often find weapons where the buildings fall through the ground post-crumbling, and this is where the gameplay completely changes. As soon as you pick up a gun, the default deer form loses its melee attack and simply shoots. As you find more guns, you equip them simultaneously, so you’ll end up having a whole bunch of them attached to the deer at one time. In just a few minutes, you go from being mostly ineffective to a powerhouse of pain that shoots hails of bullets and laser blasts. It’s pretty rad.

There are also melee weapons that you can pick up by changing to the standing form, such as a katana or lightsaber. Combat is ridiculous and, much like the rest of the movement controls, it feels kind of awkward. When it comes down to it, you’ll really be doing little more than running away from enemy waves while desperately shooting at them. You can jump to get out of the way, but it’s unreliable and clunky. Still, it’s moderately enjoyable in practice. There are more things to see around the two sandboxes, such as optional enemies to fight and a couple of little board games, but it’s nothing that will keep most players occupied for long.

The boss battles are creative and can be fun. One of them is a multi-stage fight with evolving gameplay mechanics that changes genres partway through. There’s some clear talent on display here in certain aspects. The game has an intentionally simple look, with dated, low poly everything, but it works. The second boss is where the Early Access build left off quite a while ago, so it’d be natural to expect there to be another chunk of game. 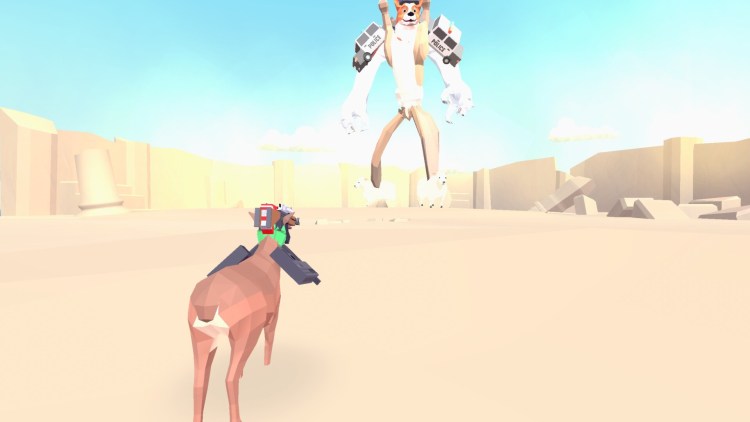 A Deer and Present Danger

After you beat the second boss in DEEEER Simulator, though, you’re taken right to a final boss fight. Once you beat them, that’s it. You’ve seen pretty much everything unless you want to go back through for achievements and random messing around. The final boss is interesting in the way it plays with some tropes, but it’s annoyingly designed. Normally, the deer has three hearts and you’ll need to get through most of the level in one go. If you die, you start over from the beginning of the level, but the game isn’t hard enough for this to be a big deal.

For the final boss, though, you start out with one heart. If you get hit, you die, and you’re expected to. Every time you die, you get another heart. After realizing this, I started dying on purpose to get more hearts instead of wasting time, only to find that dying a certain number of times also checkpoints you at a certain stage of the fight, even if you hadn’t made it there yet. This design choice takes what could have been a solid final battle and turns it into a bit of a waste.

As I made clear earlier, all of the above is easily accomplished in under an hour. DEEEER Simulator, again, has just two levels, and they might not even take you fifteen minutes each. This game costs $15 USD, for less than an hour of content. If it had ten levels, I’d be recommending it, but with just two? No way. There’s no way I can recommend spending $20 on a game that’s less than an hour long. If you can get it for $5 USD or less, then, sure. But, definitely wait for a sale. 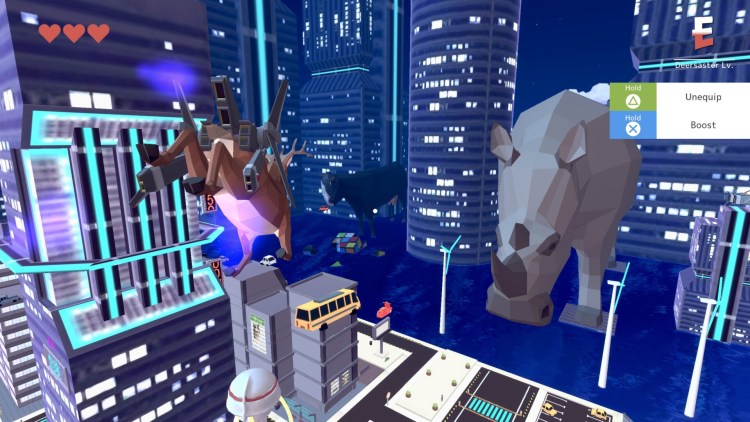 Quirky and fun while it lasts, DEEEER Simulator doesn't have nearly enough content to justify its price tag, and little has been added to rationalize the price increase over its Early Access version.