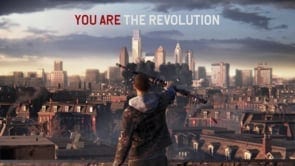 The previous Homefront entry was produced under THQ, Kaos Studios and Digital Extremes. Since the dissolution of THQ, the rights changed hands until landing on the doorstep of Deep Silver Dambuster Studio, a studio that was founded in 2014. The CG trailer, which was produced in partnership with Plastic Wax Animation, shows off what we can expect in terms of story from the upcoming sequel.

The game has a lot of backstory so it was important to fully understand the events that lead to the occupation of the United States as portrayed in the game. The acute viewer may pick up on one or two hints at this within the trailer.–Plastic Wax EVP Dane Maddams“

Homefront: The Revolution is slated for release on PC, Mac, Xbox One, PlayStation 4 in Autumn 2016.