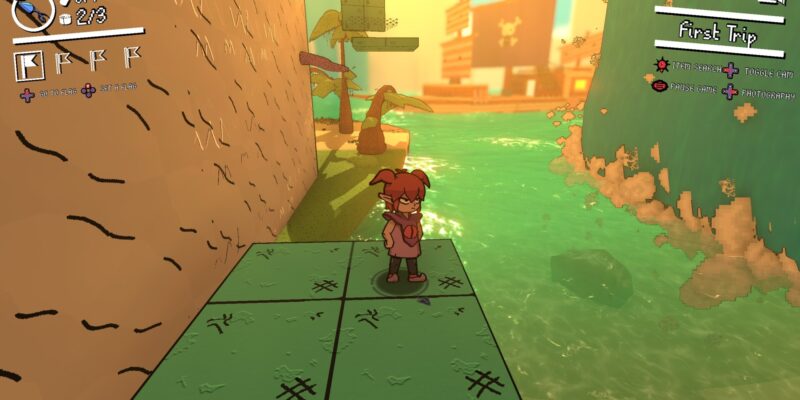 3D platformers aren’t nearly as common as I wish they were. The genre is easily one of my favorites, but major new releases are few and far between. Of those, most either only have platforming as a single attribute out of multiple, or they do their best to hearken back to the classics without adding anything of their own. Demon Turf is a rare release in that it’s not only entirely a 3D platformer, but it also does what it can to forge its own path. I’ve got some issues with it here and there, but between the excellent controls, unique aesthetic, and the plethora of compelling content, this is one of the best of its kind we’ve seen in a while.

Demon Turf‘s story follows a demon girl named Beebz, who unfortunately has a moniker reminiscent of a Justin Bieber nickname. Beebz lives in Fork Town, which is a city in the demon realm ruled over by ugh… the demon king. Anime won’t let that generic trope die, so now we’re seeing it in Western properties. Awesome. One night, Beebz has a dream where the demon king dares her to challenge him, so she decides that she’s going to march into the castle and depose of him.

The characters are mostly quite charming, and they’re voiced during key scenes. The writing is solid too, with some interesting cast members and some decent jokes sprinkled into the dialogue. Demon Turf‘s plot structure is that Beebz needs 50 batteries to get into the demon king’s castle, so she has to take over four turfs ruled by his subordinates in order to make that happen. Each of the four turfs has a different theme and its own set of residents, such as the crab people of Armadageddon. They also have different enemy designs, which helps separate the four nicely. Green enough for you?

This is my turf

Each turf has seven main levels and a boss battle. Once Beebz beats a boss, she becomes the queen of the turf, which is reflected by posters, and the dialogue of a turf’s inhabitants. Once you clear a boss battle, you unlock alternate versions of that turf’s seven main levels, which also have their own batteries. Overall, Demon Turf has 57 main levels and five boss battles, for a total of 62 levels to get through. Unlike many 3D platformers, it’s actually a fairly sizable game, taking roughly 15 hours to beat if you neglect all the extra stuff. Completionists will need to put in well over 20 hours.

You can explore Fork Town at your leisure, as well as move around freely in the four turfs, even if there’s nothing to do there. There’s a lot of extra content in the game. You can take photos and turn them in as part of photo challenges, go through ten levels of giant golf, fight through 25 arena levels, hit up the eight tougher arcade levels after finding cartridges, and master the game’s 30 trials, which clearly take a lot of inspiration from the throwback levels in Super Mario Sunshine. There’s even a pachinko level, although it’s insanely easy and only takes about a minute.

Completing any of the above stuff grants you sweets in the form of cakes and lollipops. You can also find three cakes in the seven initial levels of each turf, plus 50 lollipops in the seven others that open once you beat the boss. It’s better to think of the other seven in the same terms as the different versions of the levels in a 3D Mario game, where it uses the same basic level layout but with differences. Some levels are quite similar to their counterparts, but many are so different you might not even recognize them. Each level in Demon Turf requires you to make it through to the exit door, which is how you get batteries. To get there, you usually just have to platform. But, some levels are exploration and collection focused. There’s plenty of variety in the level design, considering, and there are frequently new types of challenges and lots of unique things to see. Beebz gets a new ability in each boss level, and these are often necessary to make it through subsequent levels. The first is a hookshot, but you get a wheel form that lets you zoom forward, and you can even turn into a bird and glide.

The controls are highly responsive and accurate, so controlling Beebz is mostly a joy. She’s very mobile and her moveset is well considered. Demon Turf also offers a solid level of challenge to boot. It’s not hard, but it’s not easy either. But, there are some issues here and there. All of the characters in the game are 2D, and this creates some problems with the platforming. Due to this, I felt like the whole shebang wasn’t 100% of the way there in regard to controls and movement.

Depth perception can be tricky because of the flat character models. Demon Turf gives you a large degree of control when it comes to landing, though. Still, I frequently had issues with Beebz slamming into platforms, just slightly below where she needed to be. Beebz can jump, double jump, spin, and combine the spin and jump for a super jump. But, once she double jumps and turns into a winged demon, she can’t use certain moves, such as wall jumps and the hookshot. After super jumping, she enters a state where she can’t do much of anything, which often aggravated me. This was at its worst when landing on the vertical platforms that Beebz sticks to. If you touch them while in an air roll directly after a super jump, you’ll latch on. But, after a moment, Beebz won’t react at all to touching them and will fall to an annoying death. I often felt like the forward momentum of certain moves was a bit too hard to gauge as well. Exiting the gliding bird form is one of the worst things about the game, as it’s quite difficult to know just where you’ll land, which leads to some frustration. To be clear, a fantastic job was done with the controls, movement, and the way they flow, but I do feel like there’s notable room for improvement. Conversely, I have few complaints about the level design, even if I really wish Demon Turf‘s levels went easier on the color choices. They’re often way too focused on a single color, which is not only monotonous, but it can make it hard to see enemies or hazards, as they blend in with everything else at times.

Beebz can only take a single hit from red attacks, which I’m not crazy about, but blue attacks just knock her back. If she falls into a bottomless area or takes a hit from a red attack, she goes back to the last checkpoint. Interestingly, you place all of your own checkpoints in Demon Turf, which is quite unique for a 3D platformer. The levels are paced quite well, too, so it’s easy to make proper use of the checkpoints without having to redo large sections. There’s combat, of course, but it’s the weakest aspect of the gameplay. Beebz can throw small punches and charge larger ones.

These are all blue attacks, so they just push foes back. You’ll often find yourself in combat zones where you have to kill enemies to progress, which means punching them over edges or into spikes. It’s far from bad, but I didn’t care for it at all, as it’s mostly easy and all about carefully nudging enemies little by little. I also think the camera itself is a bit problematic for a 3D platformer. And this one’s super blue.

I’m not sure how to describe it other than by saying that it feels natural with a mouse, but much less so with a controller. Of course, jumping and moving are much better with a controller, so you’ll have to face a bit of awkwardness either way. Also, you can use sweets to buy gameplay-changing mods and palette swaps for Beebz, but they’re far from a compelling reason to go after sweets. There’s a vault that only opens if you get 100% completion, at least, but I barely bought any mods or colors.

Demon Turf is a pretty great game, but I feel like it could be even better with some pointed player feedback. There’s plenty of content and generally a lot of enjoyment to be had, but some control foibles, slight camera troubles, and unremarkable combat keep it from entering the hall of fame. There’s so much talent on display here, though, that I absolutely think the development team at Fabraz can get there. For now, I’m just grateful that someone made such a meaty, well-tuned 3D platformer that isn’t at all scared to take some risks.

Lengthy and more than entertaining enough, Demon Turf has a few issues that irked me, but this is a very impressive 3D platformer that does a great job separating itself from the rest of the pack.