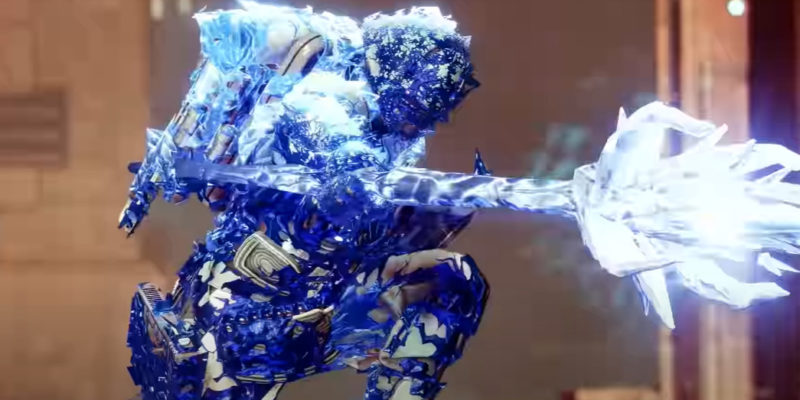 Ahead of Destiny 2: Beyond Light‘s launch this November, Bungie has revealed new subclasses coming to each main class type. These Stasis subclasses were revealed at Gamescom opening night live 2020, in a flashy gameplay trailer. As indicated by the name, these subclasses are based around Stasis, the new element coming to Destiny 2 in the Beyond Light expansion.

The trailer shows off some new gameplay from the upcoming expansion, with the tagline ”Go Beyond Light.” It then shows each class in action with their respective stasis subclass abilities. The Warlock Stasis subclass is called Shadebinder, with the description ”Fracture with frost.” Shadebinder looks like an area of effect attack that freezes nearby enemies, allowing them to be shattered. The Hunter Stasis subclass is titled Revenant, and described by “Bring the storm” text. Revenant is a throwable blade that shatters enemies on impact. Finally, the Titan Stasis subclass is Behemoth, allowing users to ”Crash like an avalanche.” This one creates huge spiked walls to stun and block off enemies.

All of the new abilities appear visually similar as they all revolve around the new Stasis element. Of course, each has clear differences that relate to the character class. Hopefully, Bungie can make these new subclasses feel unique to each character. Of course, the Stasis subclasses are just part of the new content coming with Destiny 2: Beyond Light.

The rest of Beyond Light appears to be shaping up for release soon. The expansion promises to finally introduce The Darkness, the main threat to the Destiny universe. We know very little about The Darkness, but it’s said to be what brought on the Great Collapse of humanity. The Destiny content vault will also be introduced, which will rotate chunks of Destiny content in and out of Destiny 2. Remember, Destiny 2 and all of its DLC will enter Microsoft Game Pass when Beyond Light launches on November 10, 2020.

Runeterra Celestial card breakdown for Call of the Mountain – Part One