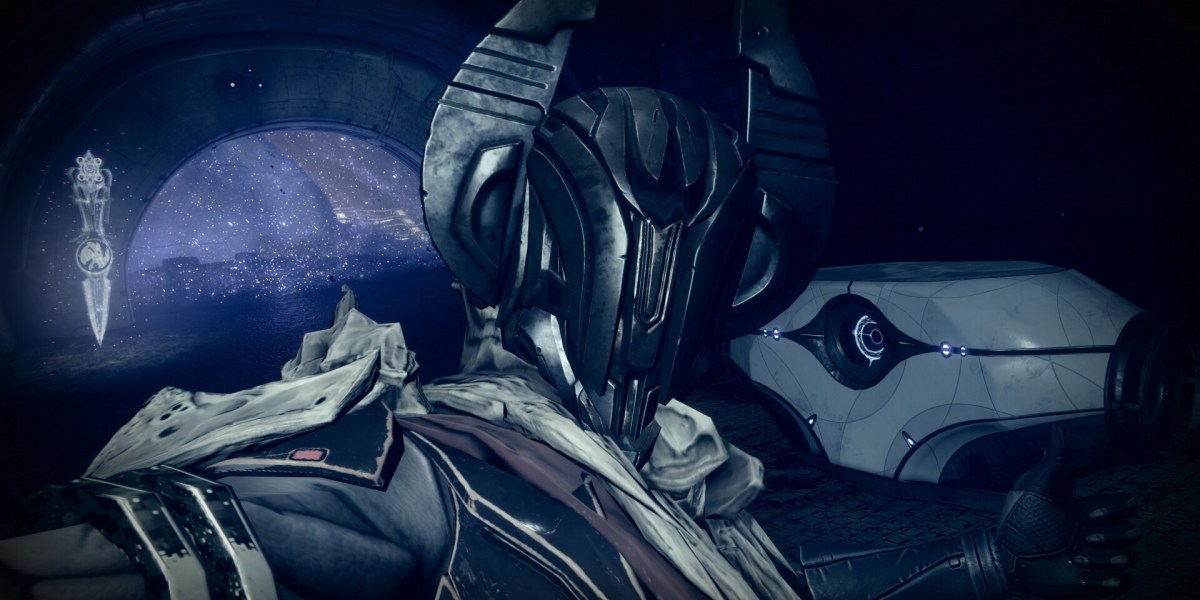 Next up, we’re going to head to the Derelict Shipyard. The totems here won’t work until you align the beacon, so make sure you do that first.

Go through the cavern in the Encampment that leads to the Derelict Shipyard. Before you reach the shipyard proper, you’ll see a True Sight totem. Use the platforms to grab the chest.

Now, this particular totem is actually important, as I’ll explain below. 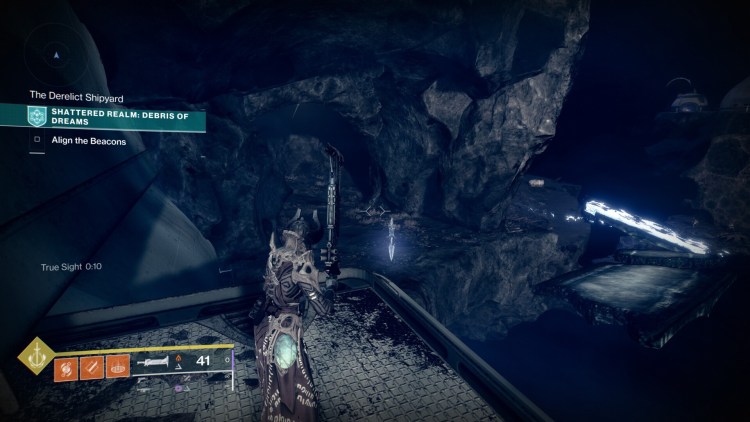 Activate the same True Sight totem and climb the tube-like structure (the same path that leads to the third beacon). Make it quick and, once you reach the top, look to your right. There’s a chest here that would’ve vanished if you don’t have the True Sight buff.

Simply use the nearby Barrier Breach totem and enter the room to get this chest. 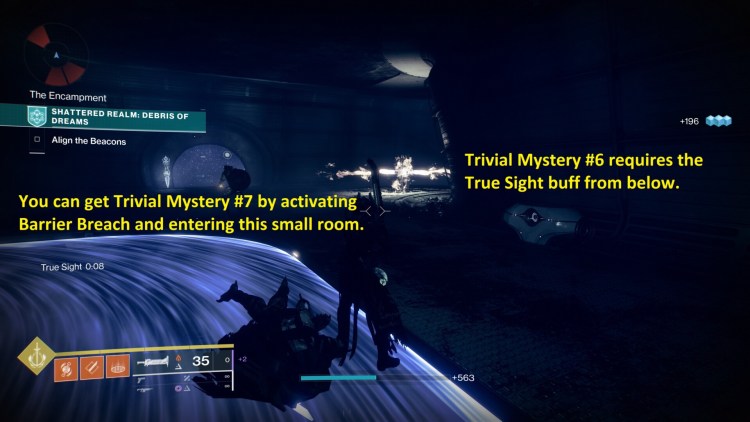 Now, for the next chests (including a couple of Ascendant Anchors), you’ll want to take the teleporter to the Convergence Field area. It’s the one where you fought the Scorn Scrapwalker boss. Be careful, though, because you don’t want to activate that third beacon.

Instead, take a look at the image below: 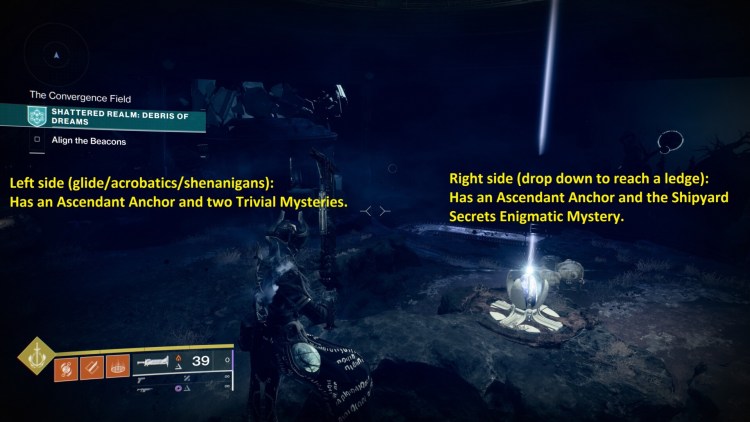 We’ll ignore the left side for now. For this one, you should go to the right and look under the walkway. You’ll see a ledge that you can drop down to.

There’s an Ascendant Anchor here, as well as a True Sight totem that makes several ledges appear. If you’ve picked up the other chests, you should get Ley Line Mysteries completed now. But, we’re not done yet. 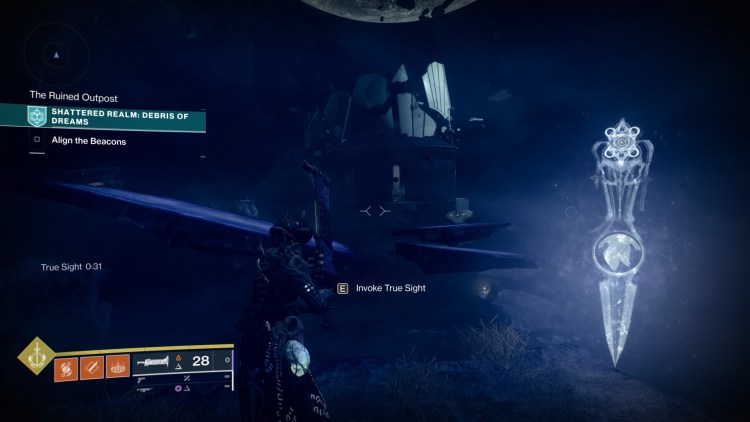 Trivial Mystery #8 and #9: The Overlook – The Envisioned Ascent and The Hidden Refuge

Go back to the Convergence Field area. This time, we’re going to take a look at the edge on the left-hand side. The floating island that we need to reach is quite far away. More than likely, we shouldn’t be able to travel here as of yet. However, it’s possible to pull off some acrobatic moves (i.e., Dawnblade top tree with Heat Rises, a Titan with Thundercrash or Lion Rampant, as well as other nifty tricks). 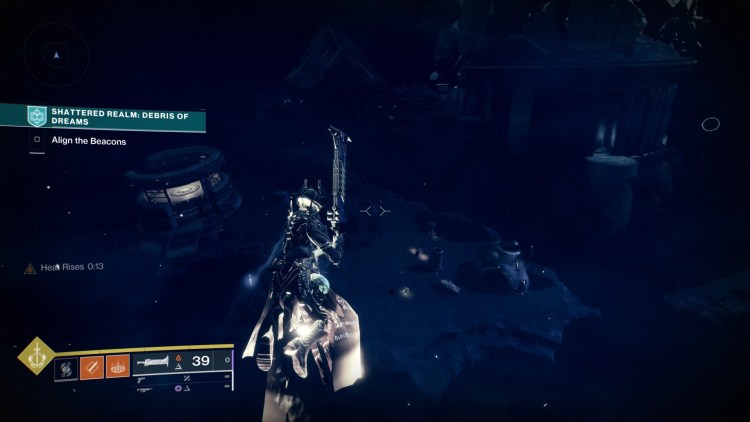 Once you reach this island, you’ll see another Ascendant Anchor as well as a True Sight totem. Two sets of platforms will appear. The one in front of you (going to the Industrial Facility) has The Envisioned Ascent Trivial Mystery. Meanwhile, the one leading down below to the right has The Hidden Refuge Trivial Mystery.

All right, that does it for the Enigmatic Mysteries and Trivial Mysteries in Destiny 2‘s Shattered Realm: Debris of Dreams. We’ll check back next week to see new collectibles and discoveries. Lastly, don’t forget to visit our Ascendant Anchors guide so you can grab additional Parallax Trajectory in this zone. 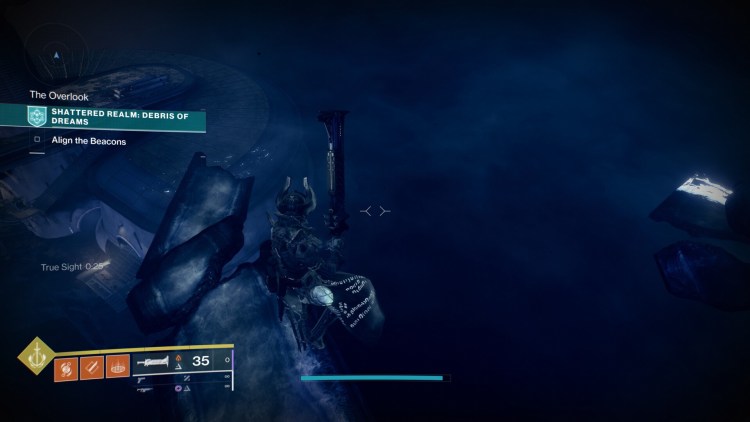 By Jason Rodriguez42 mins ago
Guides

By Cameron Woolsey49 mins ago
Guides