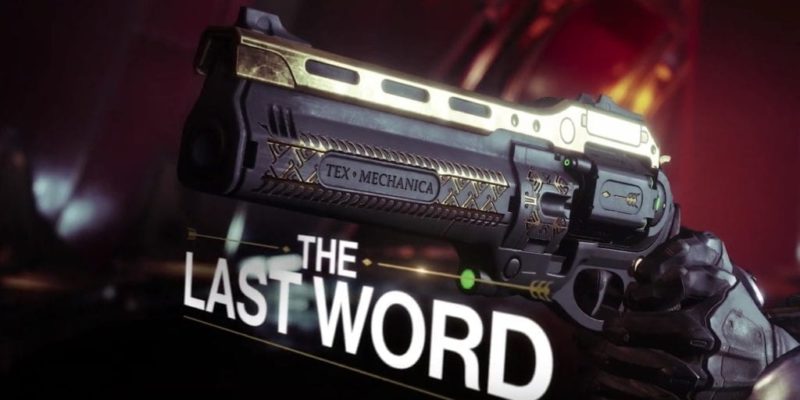 Exotics are some of Destiny’s most powerful items. It doesn’t take a genius to know just how viable the Gjallarhorn is when destroying bosses, or how much the Vex Mythoclast used to melt people in the Crucible. Still, while Destiny 2’s meta has undergone some changes, long-time fans are still looking for the return of an age-old favorite. The Last Word, returning from the previous game, will be obtainable when Destiny 2’s weekly reset happens tomorrow and the exotic quest “The Draw” goes live. Check out the trailer below:

The reason The Last Word has become a fan favorite is partly that of its viability in Crucible matches. Players loved their hand cannons, and they loved them, even more, when they deleted opponents in a split-second. That’s what The Last Word did in combat due to its Fan Fire perk which allowed it to fire rapidly. It became a go-to weapon since it was nigh unbeatable in short to mid-range engagements, and an effective shotgun counter. As you can see in the trailer above, The Last Word’s capabilities are shown in action. We’re hoping that you don’t end up with potato teammates like those.

The Last Word also became a favorite due to the lore surrounding it. It once belonged to the Guardian Shin Malphur. Malphur hunted down corrupted Guardians. One of these was Callum Sol whose backstory is explained during a mission to obtain the Malfeasance exotic in Destiny 2. Yet, perhaps, Malphur had no greater rival than Dredgen Yor — the owner of the Thorn. Towards the end of the trailer, you’ll even see a hint of those familiar bullets and the faceoff between hero and villain. Thorn will be made available later in March during the Season of the Drifter and the Joker’s Wild DLC.

Who knows, maybe The Last Word would be tied to the revival of a certain character who might eventually become a new Hunter vanguard? In any case, we’re hoping that “The Draw” exotic quest to obtain The Last Word isn’t some time-gated activity that takes weeks to complete like the Thunderlord. For now, just check out The Last Word in action in Destiny 1. Here’s YouTube user Arc TJX getting 52 kills in Firebase Delphi: