Ahh, Forsaken. That’s the Destiny 2 expansion that hopes to carry on with Warmind’s vibes and replicate the success of The Taken King in the first game. We already mentioned everything players should know about it — from the fall of Cayde-6 to the introduction of Gambit, to brand new raids and activities. We’ve also mentioned key details with big changes taking effect just before Forsaken releases on September 4.

There are, however, more things to consider in the recent This Week at Bungie (TWAB) announcement. There will be more changes when it comes to mods, class perks, Solstice armor/completions, and yes, even Xur. Many of these we’ll be part of Update 2.0.0 which goes live on August 28, a week before the expansion hits. Let’s get right to it, shall we? 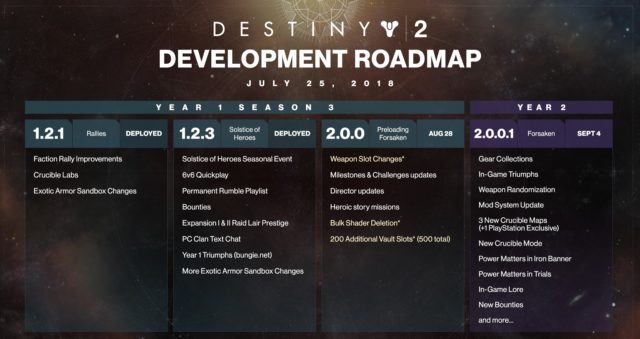 Destiny 2: Forsaken — What do I do with my mods?

Forsaken will make major changes to weapon mods in Destiny 2. As we’ve previously discussed, the mods system will be revamped which poses the question of what players should be doing with the mods they have now. The general answer is: “Dismantle. Otherwise, buy, combine, then dismantle.”

The reason you want to dismantle all your unused mods into components is because the Year 1 mods will be next to useless in Year 2. However, those mod components that you just obtained can still be used to purchase Year 2 mods from Banshee. While you can still dismantle your old mods during Forsaken, it’s much better to do that before the expansion goes live. At least you’ll be able to clear out your vault space and lessen all the clutter.

For Year 2 item drops, there’s a chance that they’re already slotted with a mod. If you like the gear and the mod combination, keep it. If not, you can dismantle the gear to get the mod back or replace the mod with a different one.

As for weapons, the weapon slot rework will also happen in Update 2.0.0 on August 28. Your weapon elements will be locked to the elemental mod you have that’s active. That means if you want to have an Arc Mananan SR-4 for Year 2, you better put an Arc mod in it right now. Meanwhile, others such as the Ikelos Shotgun and Ikelos Sniper will be locked to Solar. This was explained before as: “preventing them from stacking with Tractor Cannon” — also known as “melting bosses within seconds by using Void damage weapons.”

If you thought you could get away with changing your Hawthorne’s Field-Forge Shotgun and Perfect Paradox to Void to compensate, well, tough luck. That’s because they’ll be changed to Kinetic weapons instead. Say goodbye to having a full-auto elemental shotgun from Year 1 — well, except for the Unification VII which you can see in the video above from the Destiny Fun Police YouTube channel — or the Zenith of your Kind which is a raid drop. Those are a couple of options to keep as Void.

Certain Power weapons will remain in the same slot such as the Tractor Cannon, D.A.R.C.I., Legend of Acrius, and Whisper of the Worm. Lastly, throughout next week the Collections tab in your vault will be locked. If you need something, grab it soon or the next time you’ll be able to do so would be once Forsaken is live.

What about Solstice of Heroes and my Solstice armor?

This one is fairly important given how the Solstice of Heroes and Moments of Triumph in Destiny 2 was a fairly rewarding grind for players. It would be disappointing if these armors would suddenly be useless, right?

Well, don’t fret, Guardian. That’s because Year 1 armor can still be infused up to Year 2 standards up to the power cap. What’s also great is that we’ve learned that we’ll be able to place Year 2 mods on Year 1 armor including our Solstice gear.

There are, however, a few things that need to be considered. First, Solstice of Heroes and Moments of Triumph will end on August 28. That’s it, it’s over, it’s done… except for getting them Masterworked. If you already have the legendary (Resplendent) versions, you can still Masterwork them after the 28th although there will be some changes. 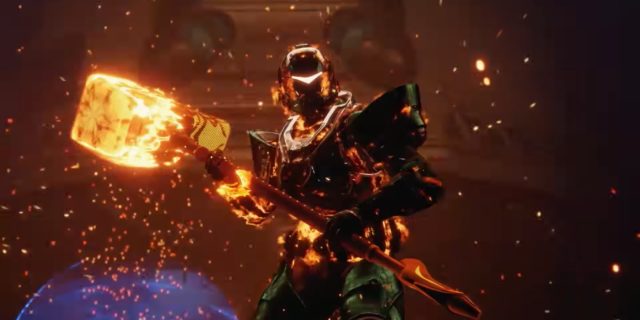 What about changes to subclass perks and exotics?

Most grenades will gain a boost when it comes to their base damage. Axion Bolts, Skip Grenades, Magnetic Grenades, Flashbangs, you name it. There’s just no mention of Tripmines, sadly. Even after the boost given by Young Ahamkara’s Spine, I still haven’t seen one-shot kills against full health opponents. Just to show you how hilariously good Tripmines were back then, here’s a video courtesy of a Destiny player El2mador.

Xur will still be around in Forsaken, of course. It’s just that he will no longer have an icon telling you where he is on the destination map. Players will have to scour various locations once more to find him and report on the forums where he is. Also, Fated Engrams which give you exotics that you’ve yet to obtain will only grant pre-Forsaken exotics.

Well, that’s pretty much it for now. Looks like Forsaken is shaping up to bring some major changes to Destiny 2. For PC players who are experiencing the franchise for the first time now, this is how things were back during The Taken King days. So many improvements and mechanics vastly changed the game compared to its vanilla or Year 1 iteration.

As usual, stay tuned to PC Invasion for more news. As for me, I’ll have to log back in the game. I’m currently 10 points shy of completing my Moments of Triumph. What’s the last requirement that I still need to do before August 28, you ask? Well, that’s opening 40 more region chests which, I feel, is a more painful ordeal than grinding for Solstice armors.

The first raid in Destiny 2: Forsaken will go live 10 days after launch… and that’s a good thing