So you’ve gotten past the initial quest steps in The Invitation given by Werner 99-40. Now, you’re about to get to the fun stuff in Destiny 2: Penumbra. It’s time to enter the Menagerie and make use of your Chalice of Opulence. Take note that your Chalice of Opulence is account-bound which means your other alts automatically have it already. There’s no need to redo the previous quest steps.

This 6-player activity takes place deep in the bowels of the Leviathan, and you’ll discover new areas and the same dangerous foes. The Menagerie does have matchmaking for normal mode. Heroic mode, which releases on June 25, will require you to find a premade fireteam. In any case, here’s a quick guide on what you can find inside Calus’ playground, as well as the bounties you can do for Werner 99-40.

First, make sure you’ve unlocked the top node of your Chalice of Opulence and that you’ve slotted a rune. Check out Nessus’ destinations and you’ll see an icon for the Menagerie right next to the Leviathan at the bottom left corner. Go ahead and start it.

The first part (the Lamplighting) will have quite a number of enemies spawning from doorways. This is not the actual Menagerie activity yet, this is just a free taste. At regular intervals, ogres will spawn. Once you kill them, they’ll also drop a couple of orbs. Pick these up and dunk them on on the pedestals surrounding the center ring. This will light up the braziers/pedestals. When you’ve lit up all the braziers, the Menagerie itself opens up.

To complete the triumph for this part (and earn 500 Imperials), you’ll want every fireteam member to light up only one brazier/pedestal each. That means each player should pick up and dunk only one orb.

What The Heck Is The Menagerie?

Think of the Menagerie like Destiny 2’s stroll down memory lane. Sure, the aesthetics will remind you of the Leviathan, except that certain areas are drab and have fallen in disrepair. Likewise, thematically, you’ll notice how it symbolizes the lost grandeur and splendor of Calus’ empire. It is the Season of Opulence, after all.

The most telling parts, however, are the mechanics for each encounter. There will be a progress bar on the left side of your screen and you’ll need to fill this to the max to face a boss. To do this, you’ll have to complete various encounters all around the Menagerie. There’s no set order and there’s no set limit to how many encounters you can have, although you have three minutes to complete each of them. You might fail a particular encounter, but increments will still count towards your overall progress. Oh, and beware because mobs are 720 power level (PL).

The Menagerie Areas And Encounters

The locations may not be of import at the beginning, but the clue on the progress bar is. Each encounter will have a particular name and that’d give you a clue about the mechanics, many of which are akin to Destiny 2’s “greatest hits.” There’s a mishmash of “orb dunking” or “plate forming,” mixed in with various enemy types and quirks. Again, you have three minutes to complete the encounters.

Here are the mechanics for each activity that I’ve found so far:

For every encounter, you’ll want to pay attention whenever a prompt notifies you that “Calus wants you to challenge stronger foes. It means a tougher enemy (often an ogre or a giant minotaur) will end up spawning. These are, technically, the “mini phases” of each encounter. Killing all of these giant enemies will let you finish the encounters successfully.

No matter how many encounters you need to do to complete the progress bar, eventually you’ll find yourself facing off against the final boss. It’s Hasapiko, a giant Vex minotaur. Note: I’m not sure if bosses will change each week.

Hasapiko is shielded and it stays at the back of the room just blasting you with its cannons. It will periodically summon yellow bar harpies and other Vex mobs. Killing the harpy majors will have them drop a Vex well granting you a buff. When you have this buff, shoot Hasapiko until its shield is destroyed, and then keep nuking it with supers and bullets.

When Hasapiko is not shielded (and while you’re DPSing), it will create Vex forcefields or walls that will move towards your area. These will kill you if you so much as touch them. Think of the first Resident Evil movie or that trap from Cube. So, yes, while you’re doing damage to Hasapiko, you’ll have to sidestep these techno-walls. Your bullets, grenades, and supers will still hit Hasapiko through these walls. Oh, and when its health is low, it’ll summon two walls instead of one.

When Hasapiko is downed, you can finally open the treasure chest. If this is your first time doing the Menagerie, then you’ll also get a triumph that can be completed, granting you the next step of the quest.

From here, you’ll need to head back to Werner 99-40 on Nessus. Open any of the chests at the ship’s stern (back) and you’ll complete Destiny 2’s The Invitation quest line for Season of Opulence.

There are three main slots. Only the topmost slot is unlocked during The Invitation quest line. The rest will require more Imperials.

The Chalice of Opulence also has perks that you can unlock and all of these cost Imperials as well.

What you’ll want to do early on is get Power & Efficiency level 1 and 2. Not only will this perk line give you two extra powerful drops, it will net you some Imperials rarely when doing playlist activities. You can also purchase an extra consumable from Werner 99-40 to gain a huge amount of Imperials when doing Destiny 2 playlist activities (up to a maximum of three per week for your account).

Later, once you’ve amassed enough Imperials and runes, unlock the remaining slots and perks. This will allow you to “fine-tune” the Chalice of Opulence, customizing it to get the type of reward that you need. Let’s say you need a PL boost for your leg armor, then you’ll want to slot a rune that’ll guarantee that as a reward. 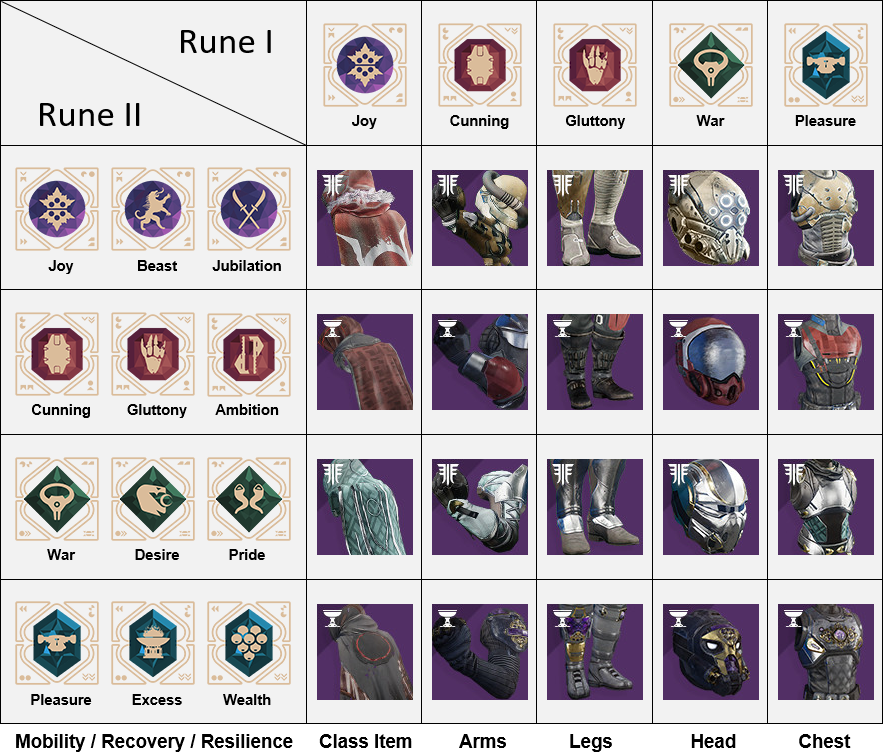 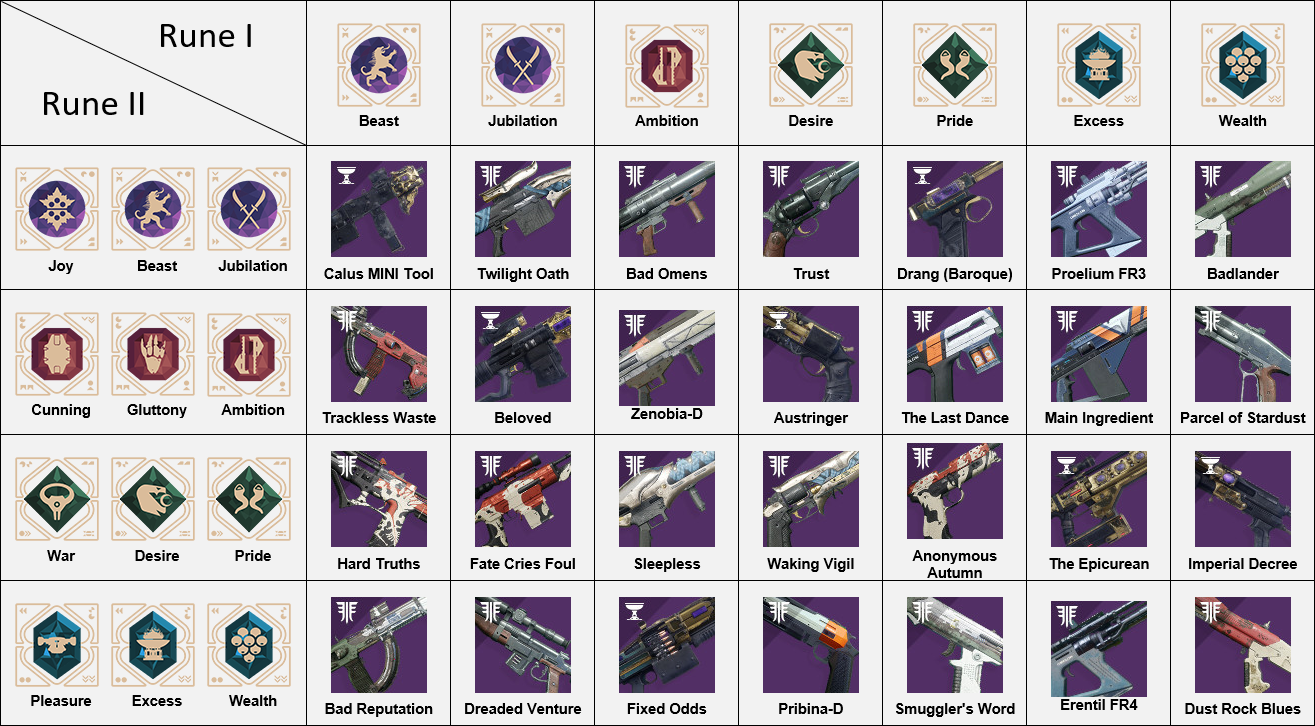 So where exactly do we find more of these runes and Imperials to unlock all those slots and perks? Well, there’s Werner 99-40. He will have the following weekly bounties:

All of Werner’s bounties will give powerful rewards, as well as a rune and some Imperials. But, Werner won’t give them to you directly. For each bounty you complete, you also get a treasure map. The locations are marked on your map so you won’t get lost.

You’ll find your reward once you open the chest in those locations. Also, once you’ve completed all four of Werner’s bounties, you can visit Benedict in the Tower and he will have another powerful gear reward for you.

Every Destiny 2 playlist activity will grant you runes and Werner also has consumables that will let you gain extras. The more Guardians that have this effect active, the more runes you can get at the end of each activity. Think of it as an extra fireteam medallion for Penumbra and Season of Opulence, except these are for runes and not for experience points.

Finally, check your triumphs page. Completing certain triumphs will also net you a large amount of Imperials so you can upgrade your Chalice of Opulence.

All of these can be done as you do your Destiny 2 milestones for the week. For the prime engrams bounty, exotics that drop in the wild do not count. They need to be legendary prime engrams instead that are decrypted via the Cryptarch. Since prime engrams are tied to the quantity (and quality) of enemies you kill, then activities that net you the most kills will be helpful (ie. Blind Well, Escalation Protocol, Menagerie, and every raid).

During the first week, Werner required 10 Vanguard daily bounties and now he requires 10 Crucible daily bounties. There’s a good chance he’ll require Gambit bounties next week so be sure to stock up on completed ones prior to the reset.

The Menagerie: The Best Classes And The Chest Glitch Farm

Once you’ve obtained more runes and unlocked more slots for your Chalice of Opulence, you can continue farming the Menagerie to your heart’s content. There also seems to be a trick as noted by Reddit user Pill_Dickle_RS. After receiving your reward from the chest, you can go through the doorway behind it. Follow the corridor as it loops around until you see “The Menagerie” pop up on the lower left side of your screen — this means you’ve changed zones.

Open up your pursuits tab quickly and then your Chalice of Opulence. Slot a new rune and make your way back to the chest. Voila! You’ll get a new reward. Keep going back and forth, slotting a new rune each time, to get the drops that you want. If you’re fast, you can get four or five extra drops in one Menagerie run. These can include the following:

As for the classes, given that a majority of players running Menagerie in the first week will still be below 720 PL, you’re going to need the following:

We’ll keep this guide updated in the coming days as we discover more runes and neat Chalice of Opulence combinations. Who knows? Maybe Werner might have something extra every weekly reset? Don’t forget to check our Destiny 2: Penumbra and Season of Opulence guide and features hub as well.

Rocksteady won’t be showing at E3 this year

Modern Warfare 2 beta: The best guns to use

Potion Permit: How to increase friendship levels with villagers

Potion Permit: How to diagnose ailments and heal villagers