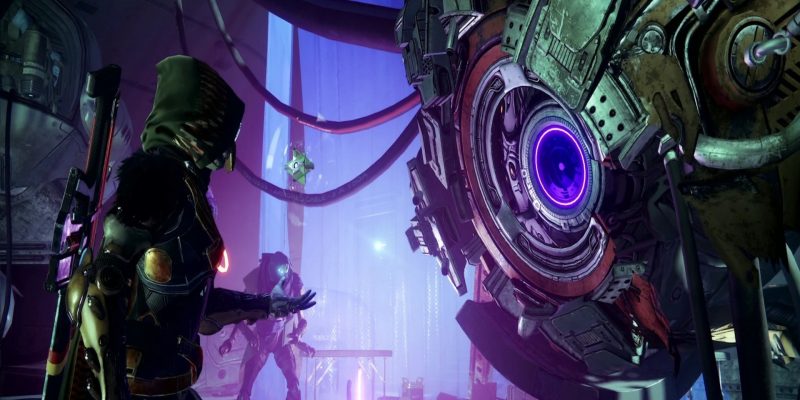 Destiny 2: Season of the Splicer has finally arrived. The new season pits Guardians against the Vex once more. This time, humanity has found an unlikely ally in Mithrax, the Kell of House Light. This latest offering has only been around for a couple of days, but you can clearly see both the good and the bad.

Although there are a few improvements, there are certain decisions that feel like a step back. I guess that’s just par for the course when it comes to Destiny 2. Surely we’ll end up wondering again if it’s worth it or not.

Now that’s what I call sunsetting

As mentioned, the Vex are the primary antagonists in Destiny 2: Season of the Splicer. That’s because they’ve done the unthinkable. They’ve actually managed to blot out the sun. I know that Bungie fiddled around with “sunsetting” items until the community eventually forced the studio to rethink its strategy, but the Vex are on a whole new level.

Without humanity’s nearby star to guide the people of the Last City, the Vanguard turns to Mithrax for help. We first encountered this Fallen leader during a rather forgettable mission on Titan. If you took out the Hive Knight he was fighting with, he’d salute the Guardian. This was a surprise at the time since it showed how humanity and Eliksni (Fallen) could co-exist. We saw Mithrax once more prior to completing the Zero Hour mission for the Outbreak Perfected exotic. 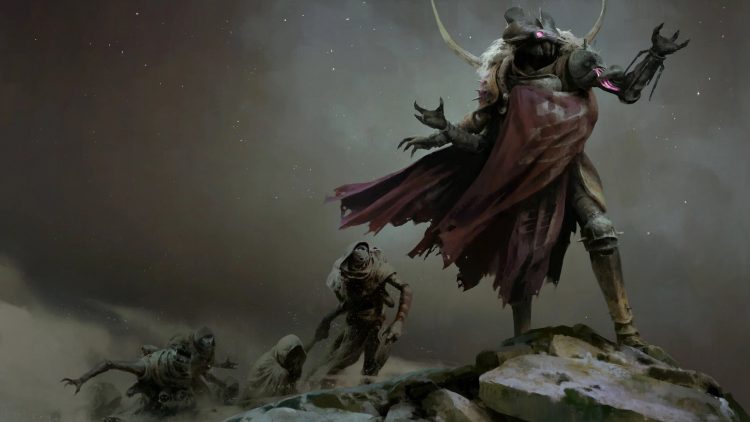 To be fair, we’ve known of how other Fallen could become humanity’s greatest allies (i.e., Variks and the Spider). However, the conclusion of Beyond Light‘s campaign did have Variks telling the surviving Fallen to rally under the banner of the Kell of Light. This so-called Kell is none other than Mithrax, and as we all know, using the word “Light” (with the capital “L”) is a big deal in the Destiny universe.

This is what makes Destiny 2: Season of the Splicer‘s narrative arc very intriguing. Will we see Fallen wielding the powers of the Light? We don’t know yet. What we do know is that Mithrax, flanked by other Fallen refugees (including baby Eliksni), brings his people to the Last City. We even catch a glimpse of the area which was once the setting for the Scourge of the Past raid (which did have Fallen enemies). How’s that for an ongoing theme? 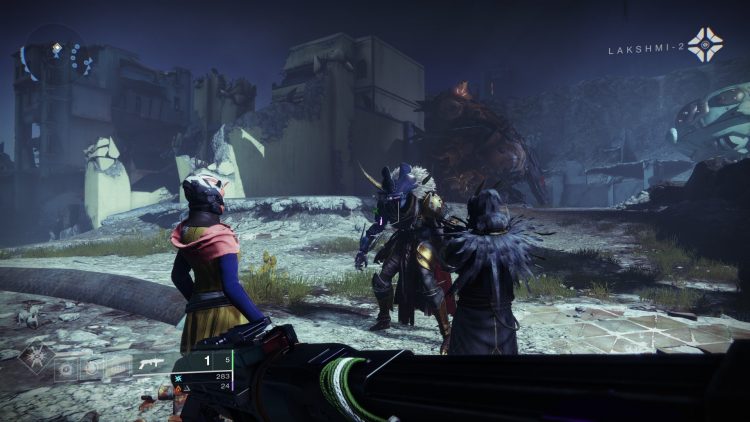 Mithrax is revealed to be a Splicer, a Fallen blessed with bio-engineering, machine-speak, and hacking prowess. He demonstrates this in an early mission where you enter the Vex Network (which will likely be the weekly Expunge activity). The high-tech, trippy, and Tron-like location oozes style thanks to vibrant colors, visual flair, and outstanding designs.

The player advances further to hack the network, but contingency measures and traps suddenly get activated. Mithrax whisks the player away, and I think we might’ve caught a glimpse at Quria (the Vex mind that was corrupted by Savathun). 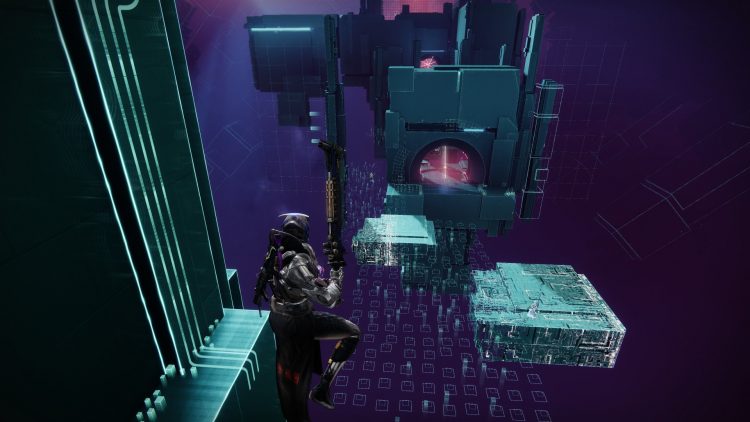 From there, you’re asked to complete Override activities. These have matchmaking enabled for up to six players, reminiscent of past runs in the Menagerie and Sundial. The location on Europa is fairly small though. There, you’ll battle wave after wave of Vex, picking up purple motes and banking them in the conflux. You can also enter a gateway to pick up a data spike to speed up the progress bar. Likewise, you’ll destroy Oracle-esque nodes to regain access.

Upon completing the wave sequence, players can enter a wormhole that teleports them to the Vex Network. This is followed by an obstacle course where you need to beware of spinning lasers, laser walls, and disappearing platforms. In the end, you’ll battle a boss to claim your loot. 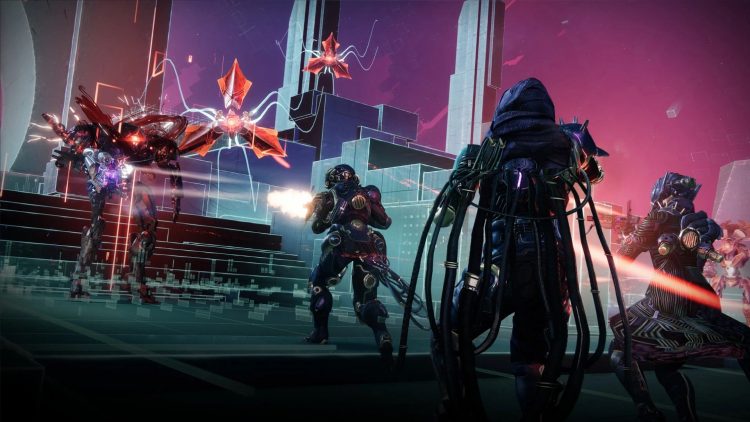 Progression in Destiny 2: Season of the Splicer

The main method of progression in Destiny 2: Season of the Splicer is through the Splicer Gauntlet. When you return to the HELM Command Center, you’ll be able to access its upgrades and perks. Like past seasonal mechanics, you can expect to grind the new activity (Override) and regular playlists to obtain the necessary resources. Lather, rinse, and repeat until you unlock more upgrades.

Frankly, this process has been going on in Destiny 2 for quite some time. You must spend hours grinding just to get the perks, but your efforts become moot once a new season begins. Even the Battlegrounds activity and Hammer of Proving barely play a role nowadays.

So, is progression truly worth your while? Well, it’s too early to judge. At the very least, the Override activity is fun, and short completion times shouldn’t lead to hassles. Likewise, the Paradrome Cube seasonal artifact has several ridiculous mods that allow you to generate explosions. 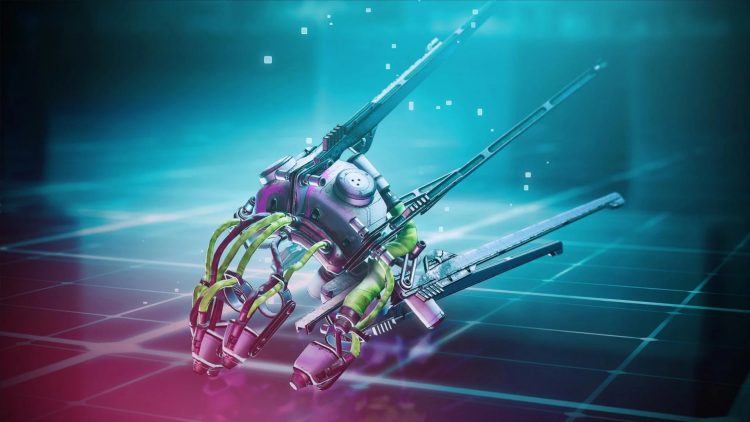 The Armor Synthesis and transmogrification system

Speaking of the grind, we come to perhaps the most controversial feature in Destiny 2: Season of the Splicer. It’s none other than the Armor Synthesis, or transmogrification system. To be clear, players have been asking for a “transmog” feature for quite some time. When it was finally announced, people rejoiced only to realize what the whole ordeal entailed.

Simply put, it’s an egregiously grindy affair. One that requires you to farm various types of “synth” items until you’re able to turn an armor piece into a universal ornament. Synthstrand, which has a very low drop rate, is required to purchase expensive bounties that give Synthcord. Said Synthcord is just a pointless item that’s turned into a single piece of Synthweave. That single resource is used to unlock one piece of gear for transmog. There are even restrictions in place such as the limited number of bounties that you can obtain.

Ideally, transmogrification should be as easy as choosing a piece of gear from your inventory and paying gold to switch to that look. Sadly, the system in Destiny 2: Season of the Splicer is a frustrating and convoluted mess. Then again, when you see that Eververse is selling transmog currency for real money, you get an uneasy feeling that the time-consuming steps were designed so that there’s an incentive to pay for methods that speed up the process. 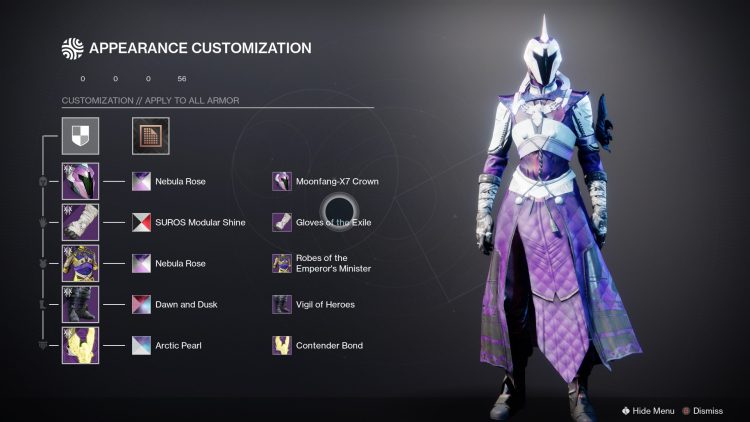 What else can we look forward to in Destiny 2: Season of the Splicer?

The Armor Synthesis mechanics tend to be the most egregious and glaring flaw in the entire bunch. There are, however, many others that can be irksome. For instance, there are pinnacle drops and Umbral focusing selections that seem to be bugged. Likewise, Bungie decided to add some ridiculous boosts and exotics for the Stasis subclass, further buffing Behemoths and Revenants. You’ll have more reasons why you shouldn’t bother playing in the Crucible unless Mayhem is live.

On a positive note, Destiny 2: Season of the Splicer does present several improvements. Firstly, there’s only a +10 power level (PL) increase. Reaching the 1,320 PL pinnacle cap is fairly manageable, and you won’t spend so much time doing the power climb. Secondly, and as mentioned earlier, Bungie did away with item sunsetting (sort of). Every weapon that wasn’t capped in the previous season, and every item that will be added to the loot pool onwards, will no longer be subject to sunsetting. Thirdly, and in relation to weapons, we’ll see over 30 new and reprised items introduced.

Moreover, we’ve yet to see the Expunge weekly pinnacle missions and other Override maps. Last, but certainly not least, the Vault of Glass (VOG) raid will make its return. The first-ever raid in Destiny will be back on May 22, and we might see a few surprises along the way. That’s why I’ll hold off on giving a review score to Destiny 2: Season of the Splicer, at least until I’ve cleared VOG. For now, you can check out the calendar of content drops below, as well as our guides and features hub for the season. 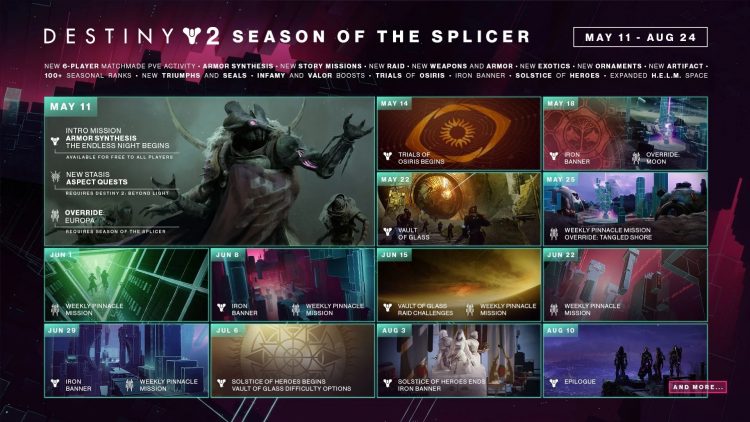 After a couple of weeks, we’ve seen a few additions to Destiny 2: Season of the Splicer. First, the weekly Expunge mission has gone live. Players will be able to explore a Vex labyrinth filled with winding corridors and deadly traps. That leads to an expansive Vex Network showcasing Destiny 2‘s excellent platforming mechanics and jumping puzzles.

The downside is that the reward seems to be bugged. This mission is supposed to give pinnacle drops, but you’ll get something below your base power level. Speaking of pinnacle drops, the issues related to Splicer Servitor bounties and the Presage reward have been fixed. Likewise, your new source of pinnacles is the Vault of Glass raid. 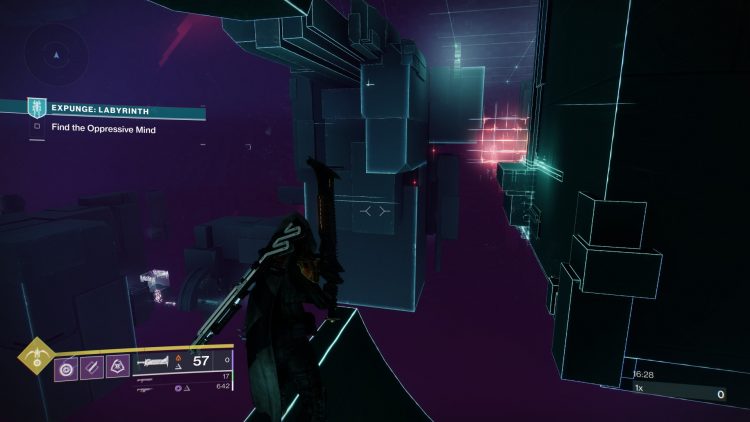 Not only is the Vault of Glass raid steeped in nostalgia, but there are additional mechanics that can prove to be challenging. For instance, you’ll need to kill the Oracles in the order that they spawn, and you’ll have to watch out for the detain bubble that can affect nearby teammates during the Atheon boss fight. Funnily enough, there are a few cheeses and exploits, just as you’d expect.

Still, it did surprise me that a raid completion didn’t lead to a significant development in the storyline. Perhaps we’d see updates about Mithrax’s involvement upon finishing more Expunge missions instead. Overall, Destiny 2: Season of the Splicer does have several improvements and engaging content to keep you playing for the next couple of months. It’s only held back by a few notable flaws mentioned earlier. 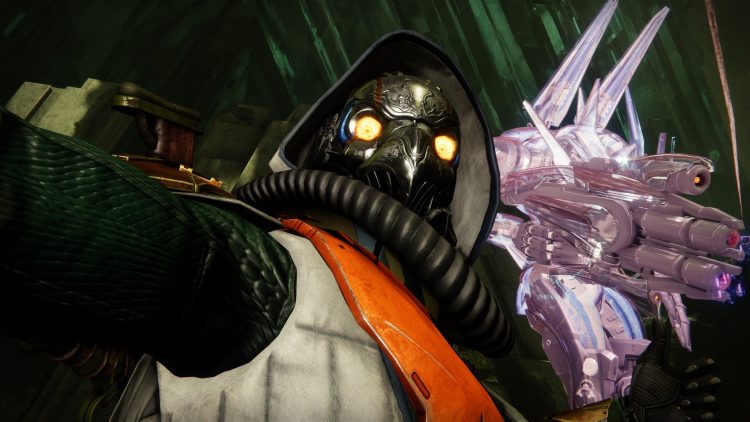 Destiny 2: Season of the Splicer

Destiny 2's latest season sees the resurgence of the Vex, as well as an alliance with Mithrax and Fallen survivors.
7.5

Destiny 2: Season of the Splicer gives you a plethora of reasons to be excited. You've got a likable supporting character in Mithrax, wildly trippy Override and Expunge activities, and the fan-favorite Vault of Glass raid. It's only held back by some questionable decisions, such as the Armor Synthesis grind and further buffs to the Stasis subclass which can be very annoying in PvP.

Disco Elysium: The Final Cut is no longer banned in Australia