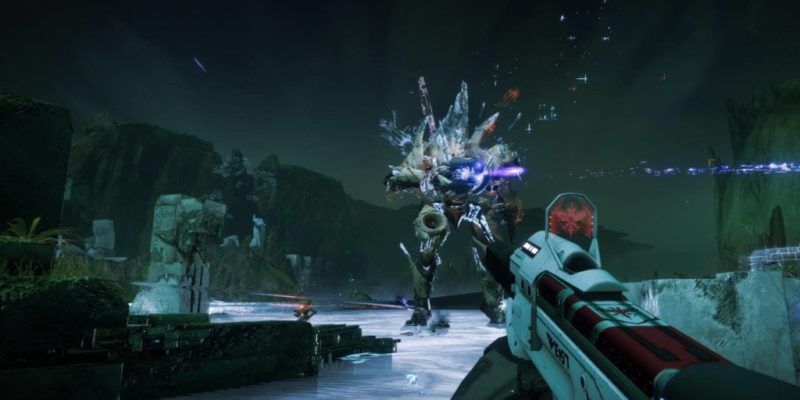 Garden of Salvation: Encounter 1 – The Chase

Your spawn point in Destiny 2: Shadowkeep‘s Garden of Salvation raid will have the activation area for the Divinity exotic quest. The area prior to the boss’ room will also have the first puzzle. Check out our Divinity exotic guide for more info. 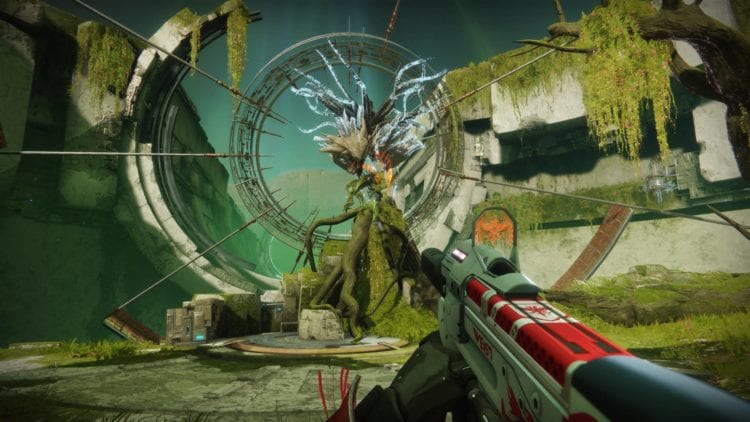 Back to the raid proper. The most important mechanic throughout Destiny 2: Shadowkeep‘s Garden of Salvation raid is tethering. You’ll be able to see this in practice in Garden of Salvation’s first encounter against the Consecrated Mind, a giant Vex harpy that’ll float around the room.

Tethering is all about getting you and your teammates “daisy-chaining” from the Vex’s “tether box” to the doorways so that they’ll open. Make sure that the tether’s beam is always blue, signifying that it’s connecting to teammates correctly. If someone’s too far, either from another player or the tether box, the tether will break. 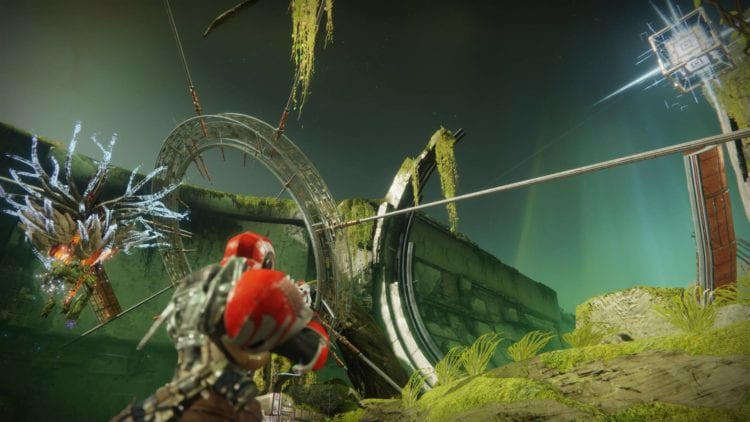 The boss will shoot a Voltaic Charge signified by a flashing white light on its “face.” A player must run through this disruption circle quickly, as leaving it on the floor a few seconds will cause a wipe. The boss will fire this Voltaic Charge thrice every room (with four rooms in total).

The player who grabs the charge gets the Voltaic Overflow debuff which lasts for 2 minutes and 30 seconds. If you attempt to run through another charge before your debuff runs out, you’ll die. This means you’ll need to alternate the players who’ll pick up the charges — all while clearing the mobs in various rooms and “daisy-chaining” to form the tether and open the next area. 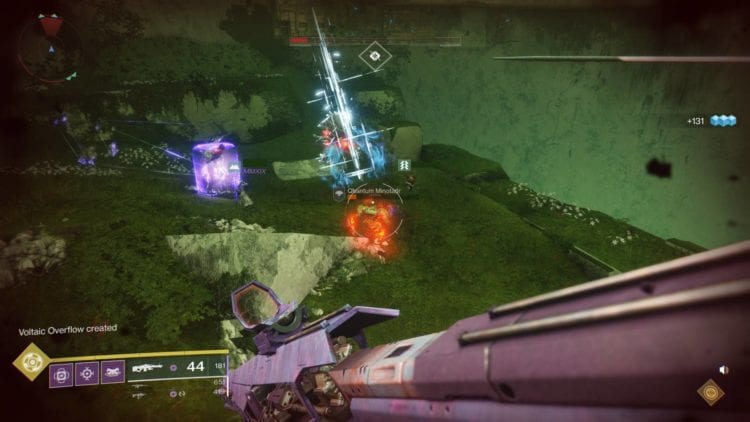 Dividing the fireteam and getting the Voltaic Overflow

You’ll want to go with a 3:3 setup for the first room:

Every room in the Garden of Salvation’s first raid encounter will have: 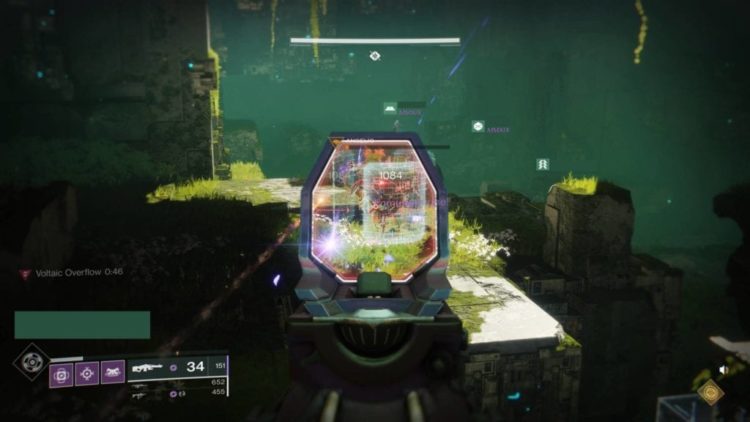 The Chase and the final sprint

The entire encounter is as simple as:

The last room can be a doozy. This is because there will be several Vex cyclopes and Overlord minotaurs that are blocking your path through this open field. Make sure players have their supers and snipers ready to take out the cyclopes immediately since they can one-shot you.

Also, once the final sprint starts, the Consecrated Mind boss will teleport further away and immediately fire its Voltaic Charge. This means a player needs to rush to grab the debuff.

The boss will fire these two more times throughout this open field, pushing further and further away each time. Just be sure that you’ve got other teammates that can grab the charge in those moments. When the Consecrated Mind reaches the edge of the cliff, it’ll teleport away and you’ll obtain your first Garden of Salvation raid chest. 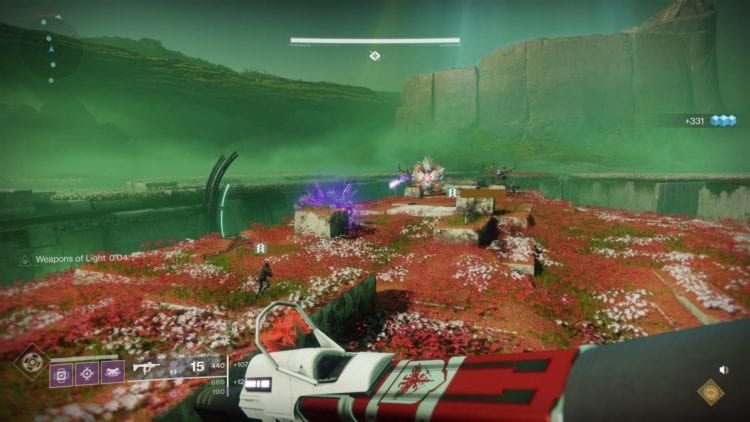 Sacrificing yourself can be worth it. If there’s a lack of cohesion among teammates and there’s no one close by who can pick up the Voltaic Charge, then someone with the debuff can grab it. Sure, they might die, but it’ll save your team from a wipe. Just revive them later on. This can also be very helpful during the final sprint when it’s all about reaching the boss quickly.

Have a sniper or scout rifle for the cyclopes. The Recluse submachine gun is extremely helpful as well, and you can place an Artifact mod that boosts damage against Overlord minotaurs.

Any subclass choice or combination would work fine for this part. Ideally, at least for the final sprint, you can have a Nightstalker go invisible (to avoid cyclops aggro) or a Sentinel bubble (to soak the eye blasts).

Destiny 2: Shadowkeep wouldn’t really be Destiny if there wasn’t a cheese in the Garden of Salvation raid. This cheese has been making the rounds in r/Destinythegame. It’s a way of completely negating the Voltaic Charge mechanic. All you need is a Sentinel (middle tree) or Arcstrider (middle tree). After the player has picked up the first Voltaic Charge, they’ll need to wait for the second charge to get blasted out by the boss. Cast your super and pop Banner Shield or Whirlwind Guard — aka. “twirly whirl” — and run through to pick up the second charge.

You’ll notice that you’re not dead at all. Instead, you have two stacks of Voltaic Overflow. You can even pick up the third charge before your super runs out.

If both your super and the Voltaic Overflow have run out, you can pick up another charge safely and repeat the process. Alternatively, you can use the Vex tether box to negate your super and keep what you had left, or just pick up orbs from teammates so you can have your super ready for later. Check out the video from YouTuber Andrew Dorman: