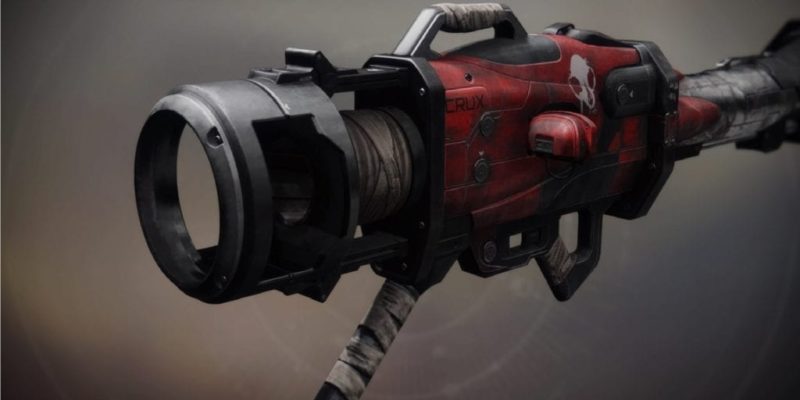 No matter how often the meta changed in Destiny 1, there was always one constant whenever I laced my boots to head to the Crucible. It was the Truth — the exotic rocket launcher which zinged past obstacles and beelined straight for enemy combatants. It has finally returned in Destiny 2, complete with its own exotic quest. Here’s our guide on how to obtain this deadly exotic rocket launcher.

Note: Truth was a rocket launcher that’s predominantly used for PvP in the previous game. Oddly enough, its exotic quest steps in Destiny 2 don’t even lead you anywhere close to the Crucible. That’s right, you won’t be grinding for Crucible kills when trying to obtain this bad boy. You can all breathe a sigh of relief, non-PvP Guardians. 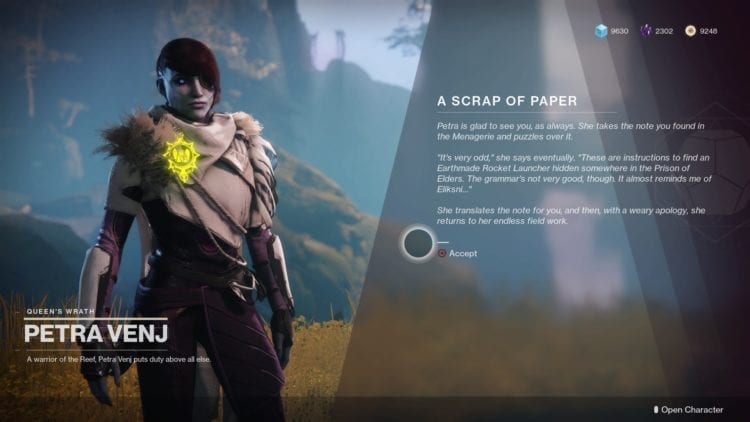 When you first boot up Destiny 2 this weekly reset, you’ll be told that completing the Menagerie would lead to a new, exciting reward. Yep, the Truth rocket launcher’s exotic quest actually starts off from there.

Complete the encounters in Destiny 2’s Menagerie activity and then defeat this week’s boss, Arunak. You can check out our mini guide for that here.

Once Arunak is defeated, you’ll be given an exotic pursuit, “A Scrap of Paper.” Only Petra Venj can decipher this so fly over to the Dreaming City. 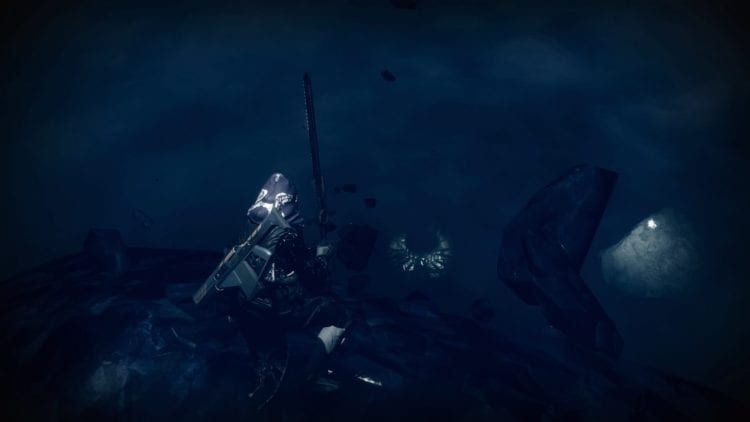 Petra will tell you that the only way to decipher the lost message is to complete an Ascendant Challenge. This week, it’s the Agonarch Abyss. Head to the Bay of Drowned Wishes lost sector in the Diluvian Mists and pop a Tincture of Queensfoil (you’ll need a few extra of these by the way).

Head to the ascendant portal that pops out before you enter the boss’ area and you’ll be in the Agonarch Abyss realm. The objective is to make your way down to the temple building, being careful not to fall to your doom. Wear an exotic that helps with your jumps or movement, and even a sword, because the fall can be quite a vertigo-inducing doozy.

When you’re done, return to Petra and you’ll have a puzzle to solve. Or do you? 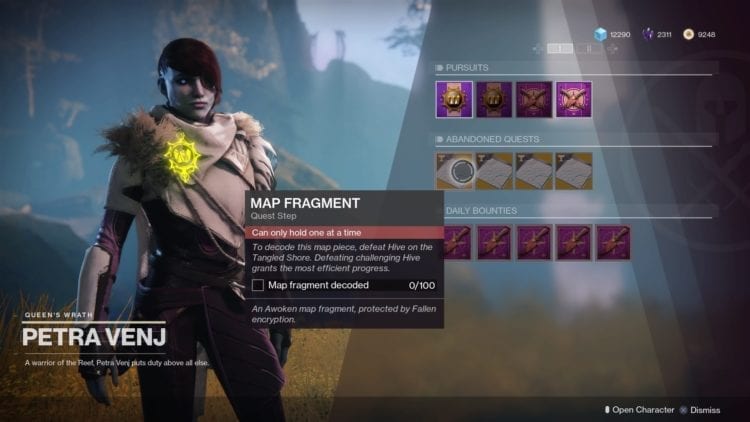 Currently, there’s a bug with the exotic quest line that allows you to skip the next part. The Truth’s exotic pursuit would tell you that you need to go to the Cistern on Nessus and that you need to “fight alongside the chosen as night falls.” It’s fancy speak for “grind this and that for get to the next part.” Completing these steps will grant you map fragments.

The good thing is that you can ignore all of that. Petra already sells the map fragments that you need! Apparently, this Destiny 2 bug turned these map fragments into abandoned quests that can be obtained from her directly.

Here are the requirements to complete each map fragment:

For best results, bring a Wardcliff Coil. You’re guaranteed to take out more baddies that way.

Note: It seems more parts of the Truth exotic quest are bugged. It’s already been obtained by Reddit user MuphintheMuffin barely a couple of hours since the weekly reset. 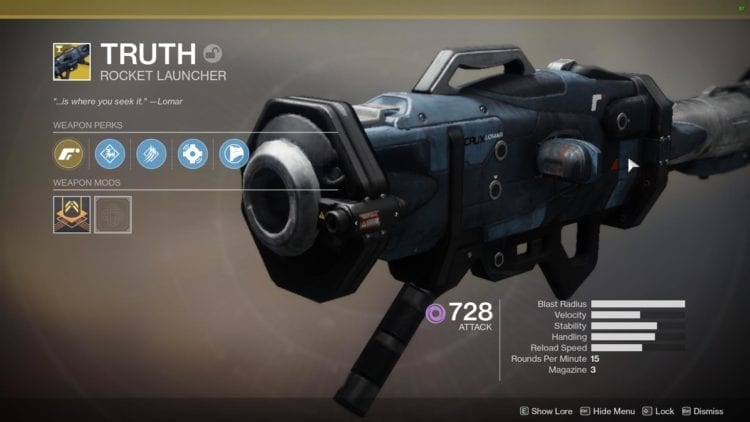 In any case, once you’re done with all four map fragment bounties, you’ll be tasked to complete the Warden of Nothing strike while you have the ascendant buff. Take note: Strike, not Nightfall — just the regular strike from the Tangled Shore destination screen would do.

Note: There seems to be an additional mechanic where you need to spot relics (or orbs) in the Warden of Nothing strike. These will spawn the platforms once you get to the boss’ room. For some reason, this was a non-issue when I completed the strike. I was matched with two blueberries who, as far as I could tell, were not collecting or even noticing relics. Still, we had all the platforms spawn at the end. Feel free to check this post from Reddit user BoSolaris if in case you encounter problems.

Eventually, you’ll destroy the Warden Servitor boss. If you’ve used your Tincture of Queensfoil, you’ll notice a 90-second timer tick down as well as some ascendant platforms that have spawned. It’s just a few short jumps and you’ll spot the chest which contains the Truth exotic rocket launcher. 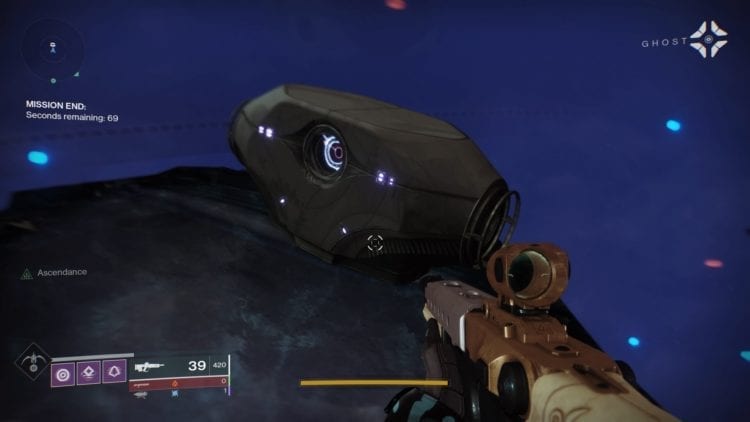 The Truth exotic rocket launcher still has its perks from Destiny 1, which is great. The big news to factor in is that its Destiny 2 iteration has three rockets in the mag already! This was similar to its Destiny 1 (Year 1) version when it was, bar none, the best PvP rocket launcher in the game. Yowza! 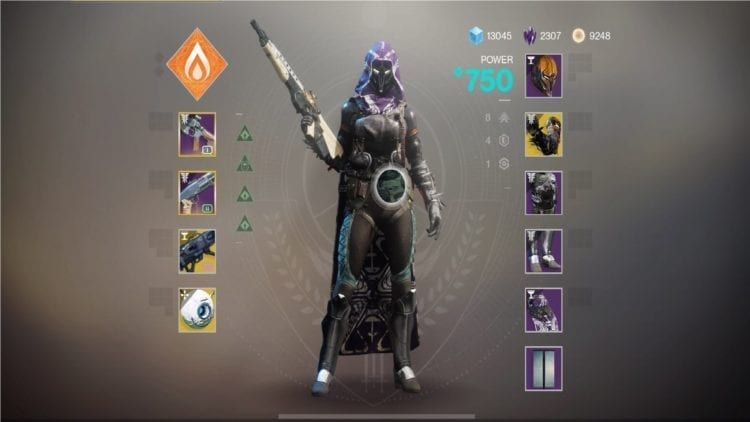 We hope this guide has helped you in obtaining the Truth rocket launcher. This exotic quest is fairly manageable, made even easier due to a bug. For more Destiny 2 Season of Opulence guides and features, you can check out our hub over here.

Keanu Reeves’ role in Cyberpunk 2077 is a big one