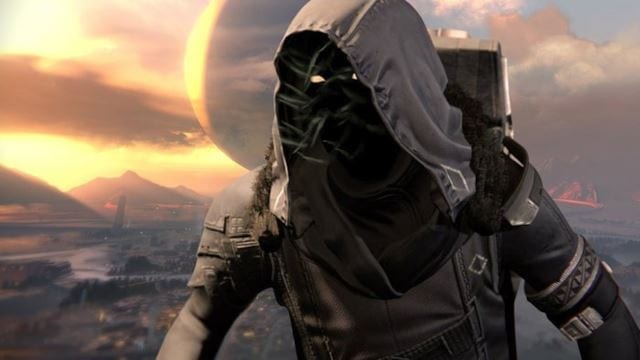 Forsaken, the newest expansion for Destiny 2, has been well-received so far. Critics and fans liked the atmosphere and the challenges presented by this new offering from Bungie. Locations such as the Dreaming City and the Ascendant Plane were aesthetically pleasing. Meanwhile, the campaign kept you on your toes with numerous callbacks to Destiny 1. The Last Wish raid is considered as the pinnacle of endgame activity.

But all is not well in The Tower. Destiny 2 still has a number of problems. Players have noted issues with the infusion and masterwork system, as well as the lack of exotic drops and Xur being useless.

Bungie tried to address this in their latest This Week at Bungie announcement. However, many players have been clamoring for improvements, and time is not on their side. With that in mind, one particular Guardian set about to remedy the situation. A Reddit user by the name of GaliasGM presented his own take on what a possible fix should look like. It doesn’t just aim to fix one facet of the game. Instead, GaliasGM hit all four birds with one stone. In Destiny terms, that’s like defeating four enemy players trying to bank 15 motes in Gambit via one Blade Barrage. But I digress. Check out Galias’ suggestions below: 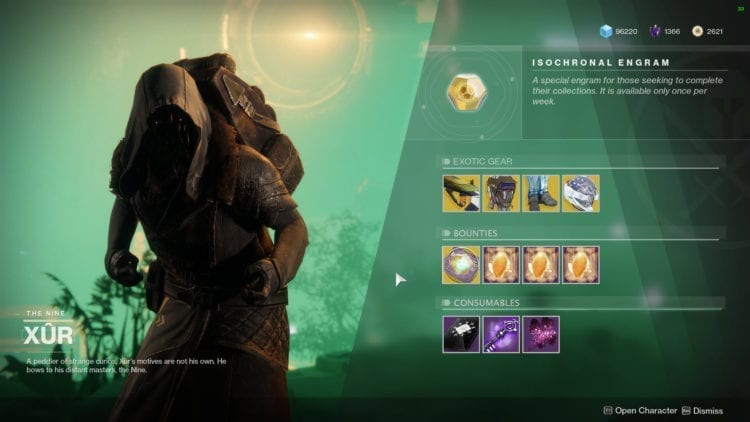 For many Destiny 2 players, infusion and masterworking have rarely posed problems in the game. Materials (glimmer, legendary shards, and masterwork cores) were fairly easy to obtain. Even if you weren’t grinding for them, they weren’t heavily required during the grinding process, so you’d still have leftovers in the end.

That all changed in Forsaken. Infusion required masterwork cores from the get-go. If you had a 530 power level (PL) Crown of Tempests and you wanted to use your 550 Scatterhorn Helm as infusion fodder, well, be prepared to shell out your resources. The only time masterwork cores aren’t used is when you’re infusing the same kind of item (ie. a Reverie Dawn Helmet to a higher PL Reverie Dawn Helmet). Many players have complained about running out of masterwork cores because of this, with very few means to obtain them.

Another issue lies with Xur, the Agent of the Nine and Destiny’s weekly vendor. Years ago, Xur’s arrival was heralded and hotly anticipated. That was because there was a possibility that he’d sell amazing exotics like the Gjallarhorn. Unfortunately, Xur’s been a Scrooge in Forsaken. He’s only selling Year 1 exotics thus far. Because exotic gear or engrams drop very rarely in the game, players could grind for weeks without even getting any of the new stuff. In fact, without duplicate protection, you could see an exotic drop only for it to decrypt into something you already had.

Needless to say, the above issues caused consternation among many vocal players. If you do searches for Xur, exotics, masterworks, and the infusion system, a majority of the top results since Forsaken launched have all been complaints about the excessive grind. 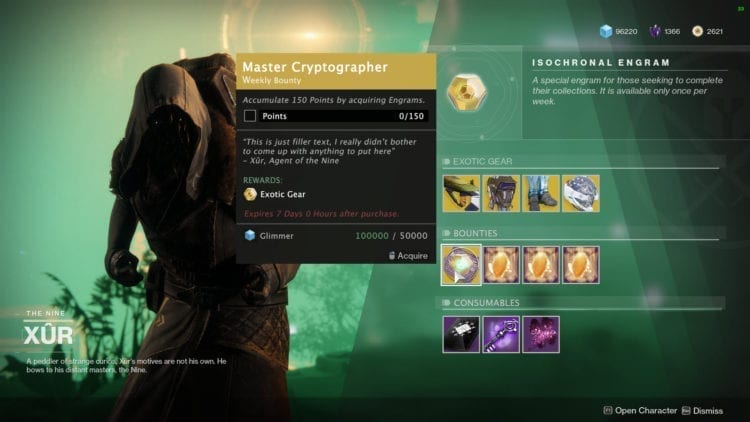 Enter GaliasGM, who’s come up with a brilliant solution. The additional means to obtain exotics and masterwork cores would be facilitated by Xur. Although you won’t get instant Year 2 exotics from him, you could grab bounties that would eventually reward you with an exotic you don’t have yet. One particular type of bounty would be obtaining 150 points awarded by different types of engrams. Hit that mark and you get a brand new exotic. Another example would be earning 150,000 experience points across multiple activities. 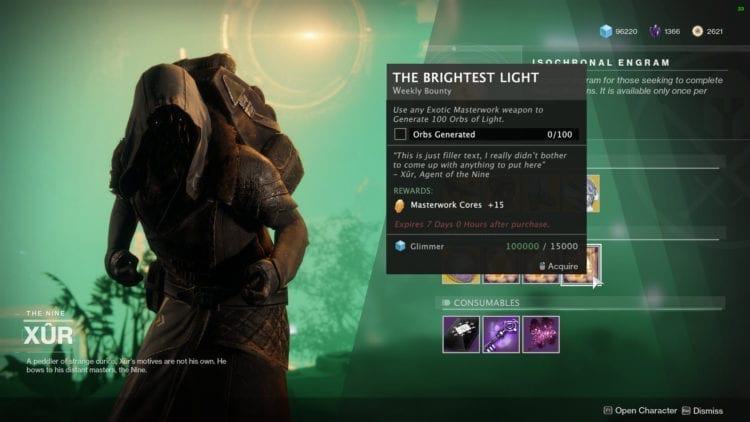 If you’re having problems farming for masterwork cores, don’t fret, Xur’s got you covered as well. GaliasGM’s example has a bounty that requires you to generate Orbs of Light. Once completed, you’d get 15 masterwork cores. Other types of bounties would require you to kill a raid boss with a kinetic exotic weapon equipped or get 75 major enemy kills with exotic energy/power weapons. 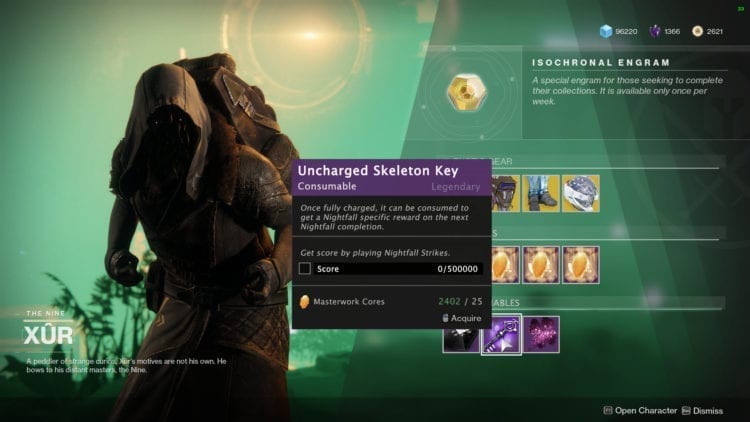 GaliasGM doesn’t stop there, also mentioning a returning fan favorite — the Skeleton Key. This item, obtained using the masterwork cores you’ve acquired, could be used to guarantee a Strike-exclusive drop once fully-charged. Two other consumables are suggested: one for easing the grind for masterwork cores in Strikes and Crucible matches, the other to increase the odds of obtaining curated or “god-rolled” weapons. As someone who’s yet to obtain that god-rolled Nation of Beasts, touted as the “Fatebringer roll,” I’m all for it.

On a personal note, these issues do not affect me at all. Although I recognize that masterworking and infusion can be costly, I tend to be thrifty in my spending of limited resources. I regularly run all the content the game has to offer, and I have a clear understanding of the load-out I would need. Therefore, these are the only items that I’ll ever infuse, let alone masterwork. Xur and the lack of exotics also don’t bother me in the least bit. After all, it took me nine months to get the Gjallarhorn, and so I don’t feel any reason to clamor for any “not-as-good-as-Gjallarhorn” drops today.

Given the veracity of player complaints, however, Bungie really needs to step up. We know that a majority of Destiny‘s player base is fairly casual gamers. While there are those who can grind from time to time, just the fact that materials are of limited quantity can be a hassle for any player.

It’s also worth mentioning that any change to the mechanics will take time and effort. Bungie is sure to ascertain whether any change is worthwhile. But they do take notice when community members provide unique feedback. Around a year ago, another Reddit user by the name of Tiredness provided their own take on reworking the NPC/vendor system. That led community manager — and former r/DestinyTheGame head moderator — Cozmo23 to reply and pass along the message to Bungie’s design team.

GaliasGM has a good understanding of what game development entails. Although not a developer, the user does study Game Development and Design. That understanding and learning experience can translate to brilliant suggestions such as the ones outlined above. We’re hoping Bungie can make the necessary changes to these systems to improve Destiny 2: Forsaken.

Gearbox’s CEO Scammed Out Of $3M

Get High With Weedcraft Inc From Devolver Digital And Vile Monarch