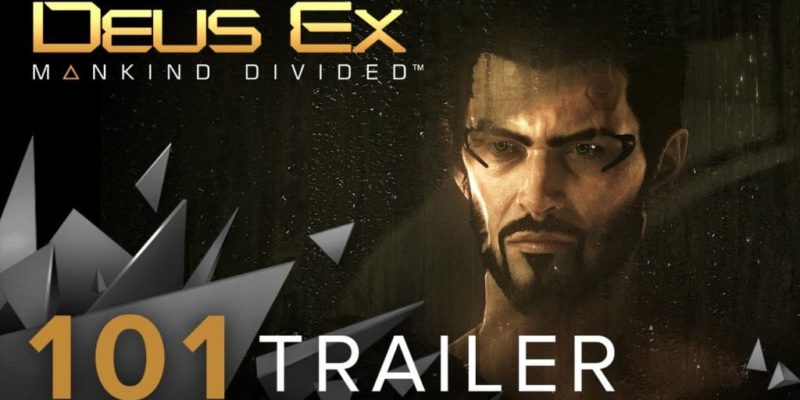 A new six minute trailer from Deus Ex: Mankind Divided gives a concise, Adam Jensen narrated, summary of the set-up for this sequel. It covers the “incident” at the end of Human Revolution (not sure they’re entirely committing to a ‘canon’ ending from that game) which resulted in extensive loss of life and the blame being placed on augmented people.

Jensen is now part of a special ops unit (which his non-augmented colleagues don’t seem all that happy about), and the augmented people of the world are suppressed, oppressed, and blamed for every terrorist incident. Which, this being Deus Ex, they might actually be responsible for after all. Unless it’s the shadowy Illuminati people manipulating everything again.

After the backstory, there’s more gameplay footage of what will probably be the first (or an early) mission set in Prague, where Jensen has to get hold of a local augmented leader. Lethal and slightly less lethal (but still probably quite painful, in a Batman type way) methods are explored, with the implication that your target will respond very differently to you depending upon your approach.

Some pre-order stuff has also been announced today, which confirms that the game will have a bunch of post-release add-ons (because there’s a ‘Season Pass’ version). These look to be your options on PC.

• Extra in-game mission.
• Covert Agent Pack: This pack contains a compilation of in-game items, including various weapons, re-skins, and upgrades. Using the wide variety of items included in this pack, you will be able to both sport a custom look, and obtain additional tools to support your play style of choice.
• Digital OST Sampler.
• Digital Books (Mini Artbook + Novella + Comic Book).

Deus Ex: Mankind Divided comes out on 23 August, so it’s still a fair way off. Here’s the trailer.