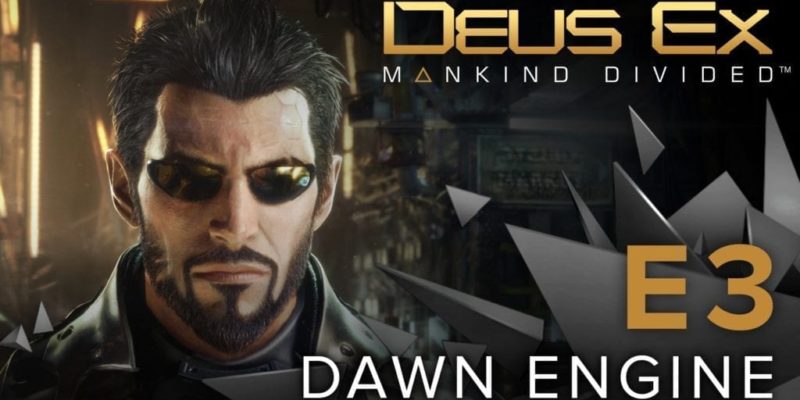 Unfortunately, Deus Ex: Mankind Divided isn’t playable at E3 this year, despite it’s heavy presence in the Square Enix marketing at the exposition. However, Square Enix and developer Eidos Montreal were on hand to show invited press a short play session behind closed doors. And what they had to show looked very good.

Taking place two years after the events of Deus Ex: Human Revolution, Mankind Divided sees the world torn into a bitter feud between augmented humans and non-augmented humans. The session, which lasted about fifteen minutes, showed returning protagonist Adam Jensen dropping into a city controlled by ARC, the Augmented Rights Coalition. Adam, as part of an Interpol task force, is investigating ARC for ties to a train station terrorist attack that we see earlier in the game.

The demo was designed to showcase the game’s four pillars of play: stealth, combat, hacking, and social. These pillars describe the multiple avenues that can be taken to solving most of the game’s problems, and should be familiar to anyone who has played Human Revolution. However, a significant amount of work appears to have been put into the social pillar, opening up all new dialogue and NPC interaction options for progressing through levels. Certain characters will also now react to Adam’s earlier actions and choices, such as the boss character not being persuaded by Adam’s pacifist argument when Adam himself tore through dozens of soldiers mere moments before.

As one might expect, Adam has received a number of significant new abilities in the sequel, such as the ability to fire his nano-blade and have it explode, the ability to remotely hack turrets and cameras in a new hacking minigame, and the ability to use takedowns from cover without breaking his stealth. One of the biggest new additions is Adam’s Tesla arm, which allows him to non-lethally shock and knock out up to four targets simultaneously. It’s clearly a step up in room-clearing efficiency.

Adam now also can switch between three core types of ammunition: normal ammunition for everyday murder, armor piercing to stop those who like to cover up, and EMP ammunition for the robots and tech-heavy baddies of the future world.

The demo showed Adam crossing through an augmented ghetto full of heavily armed soldiers. The most striking aspect of the level was its verticality, which opened up many possible avenues through which Adam could reach his target, the leader of ARC. Players could stealthily move through the level using terrain as cover or Adam’s invisibility when needed to avoid detection. A number of hacking options were available, disabling defenses and opening up new routes through which to travel. Additionally, and most spectacularly, Adam could run in and unleash augmented hell on the unsuspecting soldiers.

And the combat along with the rest of the game is gorgeous. Electrical charges crackle and fill the room with flickering blue light. Explosions rocket out a concussive wave before the lingering heat and flames distort the light. Gunfire reports sharply and its muzzle flashes briefly light up the room. A nano-blade rips through a soldier and pins him to a nearby pillar. The Dawn Engine used in Mankind Divided looks wonderful, even in the dingy augmented ghettos of the trailer. Lighting effects, especially, truly pop here.

Once Adam had fought, skulked, and hacked his way across the level, he reached the “boss” character, a man named Rucker, the leader of ARC. A number of dialogue options opened up at this point. In the demo, Adam tried to convince him to turn himself in willingly, but he was unconvinced by Adam’s arguments, and triggered an alarm, forcing Adam to escape under heavy gunfire. The demo closed as Adam looked back on a potentially more dangerous augmented foe watching him leave.

The demo showed both significant graphical improvement as well as a number of new and welcome gameplay features, not the least of which is the multiple approaches possible to bosses. The dark world of the game was also expertly rendered, with soldiers brutalizing augmented people on the streets and a heightened security presence demonstrating the tension of the times. If you enjoyed Human Revolution, it’s looking very likely that Mankind Divided will prove a must-play next year.

Deus Ex: Mankind Divided will launch on Xbox One, PC, and PlayStation 4 in 2016. You can check out the E3 Dawn Engine tech demo below: