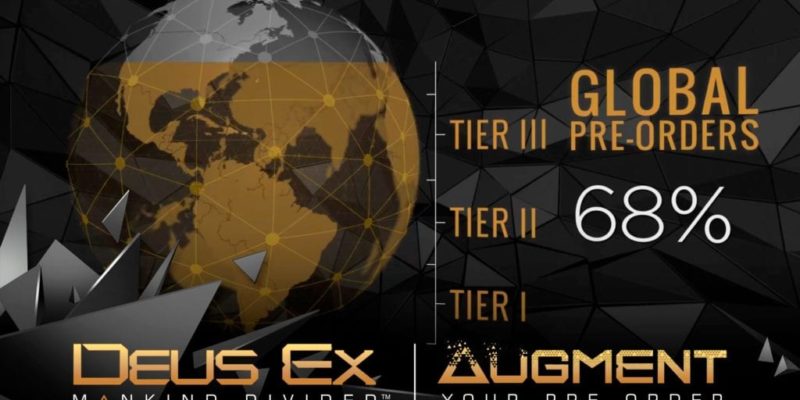 Deus Ex: Mankind Divided has finally been given a release date by Square and will appearing on your PC on 23 February.

As with most release date announcements there’s also details of the pre-order campaign which they are dubbing “Augment Your Pre-Order”. Square are taking a slightly different, but no less annoying approach to pre-orders with a tier system of unlocks for pre-orders in which “increasing tiers of pre-order bonuses will be unlocked as more copies of the game are reserved”.

The pre-order stunt goes further too. “In the spirit of emphasizing player choice, fans will be able to choose which pre-order bonuses they will receive from each unlocked tier. In addition the fans will have the opportunity to shift the official release date early by 4 days.”

The tiers are as follows:

TIER 2 – ONE ITEM PER PRE-ORDER
Pick between one of two bonuses that further immerse players into the game world – a digital art book that shows the aesthetic of the game, or a digital OST sampler with six tracks from award winning composer Michael McCann.

TIER 3 – AVAILABLE FOR EVERYONE
Unlock the “Desperate Measures” pre-order mission in which Adam returns to the epicenter of the Ruzicka Train Station explosion and must rely on his augmentations and covert operative skills to unveil the true culprit responsible for the bombing.

TIER 4 – ONE ITEM PER PRE-ORDER
Get an in-depth look at the Deus Ex universe with a digital comic book that dives deeper into the game’s global conspiracies, or with a novella that follows iconic characters from Deus Ex: Human Revolution with new and unknown details on their lives.

TIER 5 – AVAILABLE FOR EVERYONE
For the first time in the franchise’s history, if players meet this tier, the game will release four days before the official release date.

It would be better just to give everyone everything and stop messing about with selections, early release dates etc. It’s the least a publisher can do if someone commits to a purchase without playing the game in advance. Our advice is don’t pre-order and wait for the reviews because there is always a chance Deus Ex: Mankind Divided won’t live up to the hype.

Trine 3: The Artifacts of Power Review for PC

Pillars of Eternity: The White March Part One Review