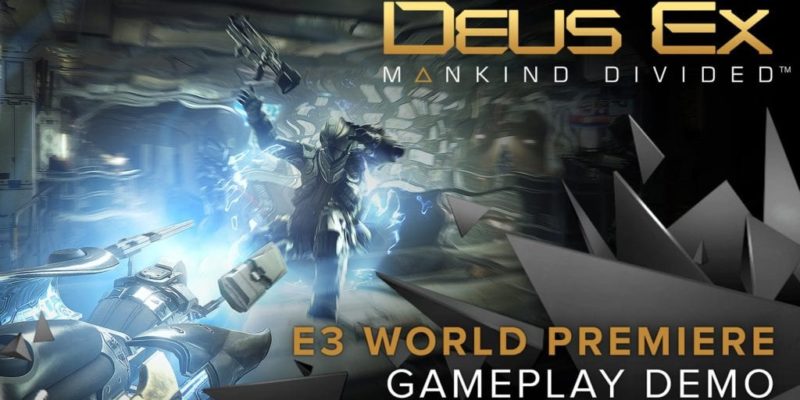 Funnily enough, we were just wondering on the PC Invasion podcast (going up later today) when the first ‘walkthough of a Deus Ex: Mankind Divided level’ video would show up.

Turns out the answer is ‘today, silly.’

It’s a 25 minute video, of which 20 or so is full UI-HUD gameplay. The intro part features Adam Jensen (now a part of an offshoot of Interpol) exchanging some expository intrigue with his contact, Alex, in Prague. After a terrorist attack interrupts their discussions, Jensen is whisked off to find the man (supposedly) responsible. But since Jensen suspects his squad is being manipulated by the Illuminati, who knows?

The target for Jensen’s mission is Talos Rucker, head of the Augmented Rights Coalition. The majority of this Deus Ex: Mankind Divided video takes place inside Rucker’s building, with points of interest narrated by the game’s executive audio director, Steve Szczepkowski.

This commentary does a pretty good job pointing out which aspects are being shown, and which glossed over; as well as dropping a few reminders that this is alpha footage and not the finished article. It notes that health and energy are infinite for the purposes of the demonstration. There’s even a “hey this bit has some spoilers” warning before the returning ‘boss battle conversation’ with Rucker, allowing you to skip ahead.

Szczepkowski also makes a terrible “stick around” joke, so it’s not a flawless performance.

Anyway, it’s a solid 20 minutes or so of the upcoming game being played. Nothing specific about the PC version in this particular video, and I am curious to find out how much of the HUD stuff we’ll be able to switch off (I’d like to see more of the Dawn Engine scenery, ideally,) but a decent look at some of Jensen’s new skills (including a very Dishonored-like ‘Icarus Dash’ move.)