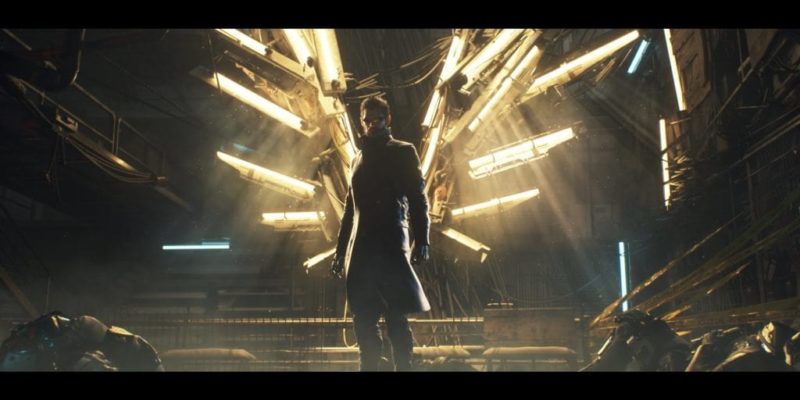 Yesterday’s early leak of Deus Ex: Mankind Divided has been followed today by an official trailer from the chaps at Square Enix. As well as re-confirming that our old friend Adam Jensen will be returning as the protagonist, the trailer’s credits are quite reassuring too.

Michael McCann is coming back as composer, which should be fairly clear from the audio track used in the trailer, but definitely worth mentioning. In addition, Mary DeMale (lead writer on Deus Ex: Human Revolution) is listed as Executive Narrative Director – which hopefully is just a fancier way of saying the same thing. Jonathan Jacques-Belletete (JJB) is back as Executive Art Director too.

Those three all seemed pretty key in shaping major aspects of Human Revolution, so that bodes quite well for Deus Ex: Mankind Divided.

The trailer sticks to the broad outline that was revealed the other day; namely that augmented fellows are now being persecuted and painted as terrorists whenever possible. Jensen is sounding rather jaded about everything, and it seems as if (despite his own augmented nature,) he’s involved with going after augmented people too.

In the trailer, this ultimately leads up to a stand-off with a burly Eastern European sounding guy who seems to be a sort of mafia don for the augmented. Or something.

It’s still not entirely clear to me what Deus Ex: Mankind Divided is planning to do about the various endings of Human Revolution. Possibly just assuming “they were all bad” and kind of ignoring the specifics.

The official site is supposed to update with additional information and details at some point today. At the time of writing though, it’s down.