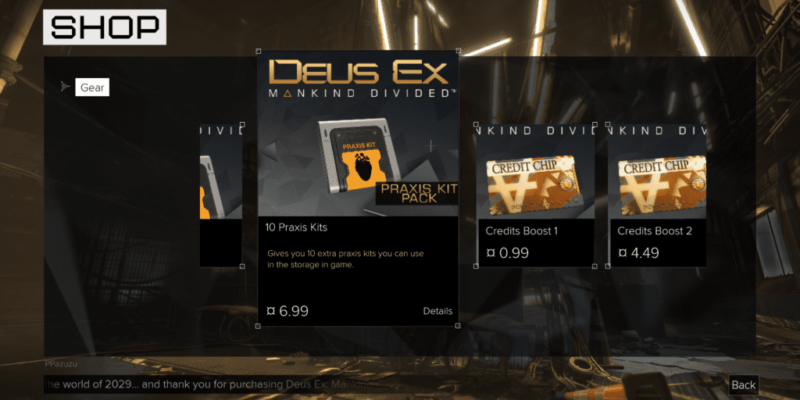 Yes, this is another videogame article complaining about microtransactions shoving their unwelcome little currency signs where they don’t belong. It’s pretty much the equivalent of screaming into the void at this point, I know. The fact that this keeps happening means microtransaction bullshit sells well enough for publishers to happily tolerate any backlash. The same is likely to occur with Deus Ex: Mankind Divided.

But I feel compelled to write something. Microtransactions (or macrotransactions, since one goes as high as $10) for the main Deus Ex: Mankind Divided story irritate me in so many ways.

I’m pretty pissed off that Square Enix hid their existence in pre-release builds, meaning my review (and all others) had no chance to mention them before launch. It was obvious that Breach mode was getting them (yes, this full priced game has two microtransaction greed-chutes) because it had a suspicious-looking second currency value and in-mode ‘shopping cart’ link. But the extra crap in the actual game came as a nasty surprise.

“[Breach is] full of slot machine ‘card pack’ rubbish and primed for microtransactions. Still, if that’s the way the Eidos Montreal team are able to keep that sort of nonsense out of the main game, then Breach is performing a noble service” I wrote at the time. So much for that. 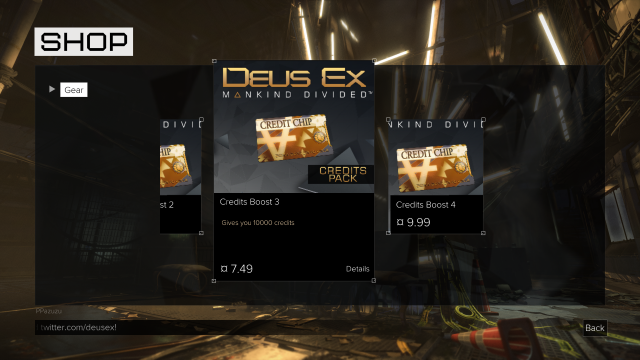 Everything you can buy with Credits in DX:MD can literally be found on the floor (or in a drawer, or a vent).

I’m unlikely to have docked major points for their inclusion, but it’s the sort of information readers are owed in a review. By keeping hush-hush about their little sideline, Square Enix prevented me from doing my job properly and helped perpetuate the annoying stereotype of games writers being complicit with publishers. Thanks a bunch Squeenix. As if it isn’t already hard enough to dispel that little conspiracy.

But enough about my very important and precious hurt feelings.

The really irritating thing about Deus Ex: Mankind Divided’s microtransactions is how they manage to maintain the duality of being both near-inconsequential and incredibly aggravating. You can buy Praxis kits at great expense, or you can buy in-game Credits at great expense. Both are a total waste of time. Playing the game earns you plenty of Praxis upgrades for your augs, and I think I ended the story with about 15k Credits in Jensen’s pocket. He’s basically Prague’s greatest cat-burglar. The one thing you are absolutely never short of is money, stuff to sell for money, or a window leading to more stuff and money.

The microtransactions seemingly exist for people who don’t actually want to play Deus Ex: Mankind Divided, but who for some reason are trying to do so anyway. That “well, they’re totally optional …” rebuttal pretty much writes itself. But the stupid Shop icon on the main menu still rankles. It’s like finding a turd on your patio. Sure, it’s not causing a great deal of harm. If other people want to roll around in it, that’s their weird business. But it’s an eyesore. It’s annoying. It really shouldn’t be there. 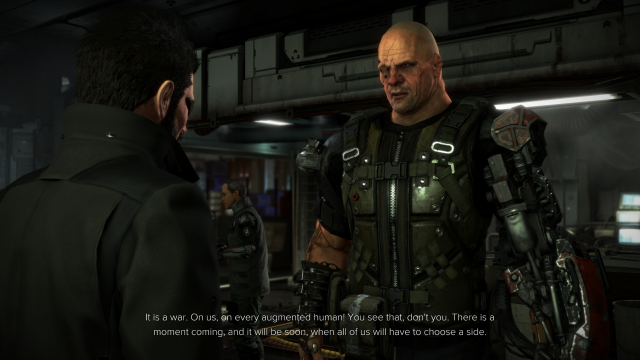 Choose wisely. Choose the ‘not spending $10 on useless shit’ side.

Of more tangible concern was the knock-on effect the eleventh hour microtransaction shop had on various pre-order bonus items. If you took a punt on Deus Ex: Mankind Divided, you got some goodies to get you a head-start the game. Again, totally unnecessary for progression in the game, but whatever. It was weapons, Praxis, stuff like that. Except because Square wants to sell people Praxis and Credits, the pre-order consumable items were suddenly of one-time use (unlike Human Revolution, where you’d optionally have your pre-order Credits for every run).

An Eidos Montreal statement on the matter came about as close to saying “Fuckin’ Square Enix made us do it” as a person schooled in public relations is ever likely to. “Consumables work the way they do due to first party constraints”, was the blinking-out-who-to-blame-in-Morse-code response.

That’s not exactly going to break the Top 50 for disrespectful decisions publishers have ever made, but it’s another piece of unpleasantness that an otherwise rather fine game like Deus Ex: Mankind Divided doesn’t deserve.

There was a real fear prior to the launch of Deus Ex: Human Revolution that big bad publisher Square Enix would get its claws into the beloved series and start to ruin it. To its great credit, Human Revolution actually managed to dodge a lot of that unnecessary brand-bloat. But when I look at Mankind Divided’s stupid microtransaction shops (the very antithesis of Deus Ex’s ultra-flexible ‘use game mechanics and your brain to solve environmental problems’ approach), it reminds me that in little, aggravating ways, publisher interference can rarely be held off forever.

Deus Ex: Mankind Divided is a great game, but now it will forever have a turd on its patio.