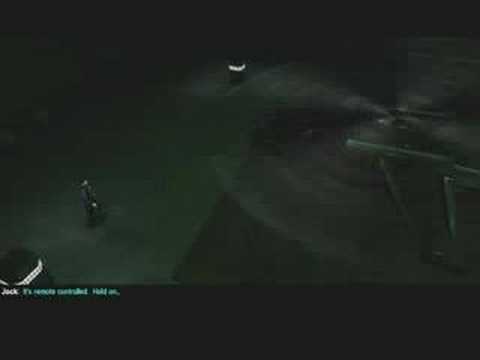 Deus Ex: The Fall has managed something that’s bordering on the impossible. On the one hand, it’s pretty much an unmitigated disaster in every way that matters. On the other hand, it’s… somehow strangely respectable.

Meet Ben Saxon, the most boring super-mercenary the world has ever seen.

Deus Ex: The Fall puts players in the worn military boots of Ben Saxon, an augmented, ex-SAS, ex-Belltower operative who is so boring he could star in a series of Dan Brown novels. After a mission that Went Horribly Wrong, Saxon was rescued by the Tyrants – better known as “the really annoying bosses from Human Revolution” – and joined up with them. He then betrays them after his very first mission, because he discovers to his surprise that a group called “The Tyrants” may actually be manipulative and naughty.

Since then he’s been hiding in Costa Rica with Anna Kelso, who gets absolutely no exposition and is almost completely unexplained (unless you buy the novel Deus Ex: Icarus Effect, which apparently leads into this game). Alas, their supply of anti-rejection drug Neuropozyne is running low, so Saxon travels to Panama City to acquire a new supply… and then gets involved in unraveling a drug-related conspiracy, for basically no reason barring curiosity until pretty much the end of the game.

Don’t worry! The droid hasn’t been alerted by the gunfire or by the two people I’ve murdered, somehow.

Saxon is boring. Kelso is boring. Every character you interact with, barring maybe one, is boring. The writing is pretty terrible right the way through (there’s a lot of “as you already know” exposition, and that’s without going into the utterly atrocious dialogue that takes place towards the end of the flashback mission with the Tyrants); hell, the very first pocket secretary you find talks about “cats fucking”, which pretty much sets the tone and quality for the text and dialogue to come. The plot itself – which, again, Saxon is largely involved in for very little reason – doesn’t really add much to what was already present from Human Revolution, isn’t particularly interesting, and doesn’t even have the good graces to end, instead finishing on “TO BE CONTINUED” after resolving exactly no plot points.

So, yeah, the writing is a little bit below what I expect from this series. It’s not saved by voice acting, either; while the poor people doing the voices didn’t really have much to work with, most of the performances are wooden at best. The original Deus Ex didn’t exactly have spectacular voice acting, but hey, at least “What a shame” and “A bomb!” were funny. This isn’t. It’s just ughhh.

I wasn’t kidding. Deus Ex: The Fall glances at the occasional philosophical questions and ethical quandries posed by past Deus Ex games, and then scrawls dicks in the margin.

Unsurprisingly, there isn’t really any lip-synching, with characters instead possessing flapping mouths that make them talk like Muppets. For that matter, the general graphical quality of Deus Ex: The Fall is incredibly uneven. Most of the main character models and textures are fairly passable – not fantastic, but about what you’d expect from an HD port of a mobile game. Others are grainy, flat, and would’ve looked bad in the first Deus Ex. The environments at least follow Human Revolution‘s art style, but I suppose all that really means is “everything is orange.”

But hey, this is a Deus Ex game! The writing’s sad, sure, but voice acting? Graphics? Deus Ex is one of the finest games of all time because of its gameplay, not because it looks nice. It’s all about big sandbox areas, and tough decisions, and inventory management, and building your character the way you want so that you can get through the game’s challenges in your own way.

Naturally, Deus Ex: The Fall manages to spectacularly bugger this up, too.

what the hell is wrong with your face

Let’s start with the controls. This is a mobile port, but – what with the PC handling first-person games with aplomb – you’d think that this couldn’t go wrong. It does. Not only can the keyboard controls not be rebound, but the mouse sensitivity is so sluggish that it feels low even when ramped up to maximum. The game regularly ignores mouse-clicks when it comes to interacting with menus, so you might have to click, oh, 30 times on “HACK” to actually start a hacking attempt. As if that wasn’t enough, you don’t use something in the environment by highlighting it with your crosshairs and pressing “Use”, because the game will normally ignore whatever you’re pointing at and choose whatever’s physically nearest in that general direction. Good luck trying to pick something up if it’s placed next to a useless interactive object! Like, say, something sat in a phone booth!

The rest doesn’t really work too well, either. Combat is anaemic, with most weapons feeling about as powerful as peashooters, and it’s tricky to gauge whether a weapon you have is sufficient to take out an enemy with one hit or if it’ll magically alert both him and all the guards he’s “linked” to. Cover never feels quite right, the low FOV and low sensitivity make aiming an irritant, and bodies disappear a few seconds after death so you don’t need to worry about late detection. The enemy AI is unbelievably stupid, occasionally taking cover but usually content to stand in the middle of a room or slide towards you, and when they’ve lost sight of you they’ll either become “staggeringly psychic” or “completely blind.” But really, there’s simply no challenge in beating the enemy AI through combat or stealth, and if you do somehow die… well, you’ll probably have a Revive Pack that will immediately bring you back to life.

Amazingly, this cutscene actually manages to be even less dramatic than this screenshot implies.

Reducing the challenge even further, you have infinite inventory space so you can hang onto as many weapons or items as you like, and – in what is possibly the silliest decision yet – you have permanent access to an in-game store. That’s right: you don’t need to visit a shop to stock up on weapons or ammo. You can do it at any time throughout the game. In the middle of an enemy fortress, surrounded by guards? No problem! Pop into the shop menu and pick up a silenced assault rifle. Enemy security bot got you pinned down, and you’ve got nothing to deal with mechanical enemies? In another Deus Ex, you might have to improvise! Here, you can just head into the inventory screen and buy an EMP grenade. Stupid, stupid, stupid.

In its favour, maps generally do offer multiple routes. But don’t worry! Things fall apart again as soon as you start finishing missions, thanks to insane scripting. One mission, for instance, has you sneak into a multiple-map drug den to find some evidence. I reached the top floor, killed all of the guards present, and went into the target room to find myself in conversation with the head drug dealer. Despite my having brutally murdered all of his guards, he threatened me with all of his guards. When I acted cowed, he told me what I wanted to know and let me go, for some reason. At which point all of the guards on the floor respawned, along with a few extras, for some reason. It’s okay, though; they weren’t hostile, because he’d let me go. Until I went down a floor, because all of the enemies in the rest of the drug den were still aggressive, for some reason.

For the record: the first game in this series had a ludicrous amount of different dialogue, depending on little things you did. Kill a lot of guards on the first mission? People will mention this. Kill no-one? People will mention this. Kill the target, after he’s surrendered? People will mention this. Shoot an ally in the face in a certain section, despite him being invincible? There’s a unique dialogue line for that. These little touches showed an amazing attention to detail; they made the world feel believable and made you feel like you mattered. There is absolutely none of that here, to the extent that one dialogue choice that harkens back to Human Revolution, and could easily have led in a vaguely interesting direction, appears to make no difference at all. By and large, choice outside of “what route you take” and “what skills you upgrade” appears to be irrelevant.

One can only assume that gang members regularly assault public train stations in Deus Ex’s future, considering the complete lack of police presence. And – despite someone else telling you to just run – there is absolutely no dialogue at all for you killing them all.

Then you finish the entire thing in about three hours and, perhaps, spend the next week of your life reflecting on what a colossal waste of time that all was.

I could go on, but do I really have to? Deus Ex: The Fall is pretty much a catastrophe in every way possible. It’s a pale imitation of Deus Ex: Human Revolution that was seemingly made by following a checklist of everything a Deus Ex game needs to have, but not managing to tie it together with any skill, verve, or spark. The best thing you can say about it is that it’s a comfortable reminder of just how good Deus Ex: Human Revolution was, but that’s absolutely no reason to go spending £8 on something this shoddy. I respect the effort expended in trying to get Deus Ex onto a system that absolutely isn’t tailored for it, but it doesn’t matter how well it worked there. It just doesn’t work on PC.

Bear Simulator funded on Kickstarter, paws to appreciate it