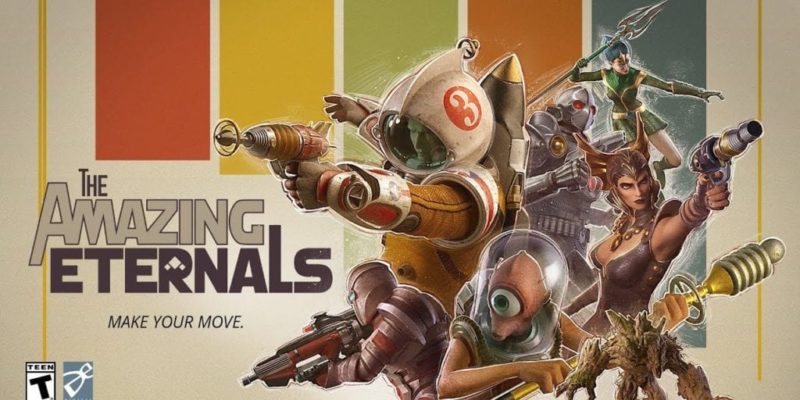 Digital Extremes revealed The Amazing Eternals, which was originally names Keystone, back in May this year. It was an FPS that included deck building and it went into beta on 29 August.

Today DE revealed that they are pausing development on the game as they feel it did not perform well once the beta started. According to DE there weren’t enough players to make games possible. This doesn’t mean it was a terrible idea but likely just terrible marketing of the beta test itself and not dishing out keys to a targeted audience.

Players who jumped in on The Amazing Eternals Founders program are being given refunds, but in a way, it’s a shame to see it halted. It’s retro 70s styling looked rather good so hopefully it will return in some form at a later date.

The update from DE reads:

After many discussions internally on the state of The Amazing Eternals, we have decided to hit the pause button on development at this time. This decision didn’t come lightly. We worked hard to make a game that we are proud to say was shaping up to have great potential.  However, we took an honest look at the current gaming landscape and how the game was performing in Closed Beta. Unfortunately, the game wasn’t attracting players fast enough to support a viable matchmaking player base with the current game design direction, which is the lifeblood of this type of game. So, with heavy hearts, we’re taking a step back to reevaluate the design and may revisit our intrepid heroes in the future.

For those players who believed in what we were making and invested their hard-earned cash into the Founders Program, we are humbled by and grateful for your dedication and support.  Refunds will be issued over a 72-hour period beginning today, October 26, 2017 and may take up to 3 to 5 business days to process. During this period, the game servers will remain live until 11:59pm ET, November 2, 2017.

The official forums and Discord will remain live indefinitely for players who want to stay in contact with each other, and the entire development team will remain with Digital Extremes and transition to Warframe development, so if you’re a Warframe player, you may still see us around.

This was a hard decision to make, and we can’t thank you enough for your incredible support throughout development. The Amazing Eternals will live on through all of you who were there to make it happen.

We do not have any additional plans to discuss at this time, but feel free to post any questions or concerns here, and we’ll try to answer them.

What now for DE? Back to concentrating on Warframe which has been given a boost with the recent content update. The competitive shooter space is not easy to crack with the likes of Overwatch on the scene. Lawbreakers found that out the hard way.