Yes, there is, indeed, a cute doggo in The Devil in Me. He’ll pop up from time to time, scaring away the characters. Eventually, though, you’ll need to make a fateful choice. Here’s our The Devil in Me guide to help you save the dog, Connie, for the Happier Ending achievement and Mysterious Creature bearing.

Connie is the name of the dog in The Devil in Me and your encounters with her are part of the Mysterious Creature bearing. Before we continue, I’d have to cite that all characters remained alive during the course of my run. However, I’ll still add related details due to all the possible outcomes.

If Charlie died earlier in the game, you’ll control Mark as he’s on his way to the factory. There, he’ll see the dog. You’ll have an aim-and-throw moment here:

Note: If Charlie is still alive, you’ll control him during the Cliffside chapter. Connie will bark at him, and that’s that. It’s implied that Mark encountered, petted, and befriended the creature. Homestead: Kate and Jamie are alive

The key decision if you want to save the dog in The Devil in Me occurs during the Homestead chapter. In my playthrough, I was controlling Jamie, although Kate was also alive (both survived the Glass Trap).

In any case, enter the farmhouse. Jamie will see Connie the pitbull. You’re then given an important choice if you want to save Connie the dog in The Devil in Me, and it involves telling Kate what to do:

Shortly thereafter, Du’Met will show up. He’ll hear Connie’s growls, and he’ll investigate where the noise is coming from. Make sure to check the Accessibility options, and that the QTE timeouts and combat timers are not disabled.

Now, once Du’Met spots Jamie, the camera will pan to the broken bottle that Jamie is holding. This will turn into an aim-and-shoot (or stab) sequence. Here are all the possible outcomes: Anyway, you’ve saved Connie the dog in The Devil in Me. The next time you see him will be during the Lake finale. As the group sails away on a boat, Connie will hop in and join them since she trusts Mark. When Du’Met attacks, she’ll get thrown overboard, though she’ll manage to swim to safety. This nets you the Happier Ending achievement.

Note: You’ll obtain the Happier Ending achievement regardless of which (human) characters live through the finale. It’s even possible to get the entire crew killed, making the dog the sole survivor. Homestead: What if Jamie is already dead?

Last but not least, if Jamie died during the Director’s Suite chapter (i.e., either stabbed by Du’Met or squished by the Glass Trap), you’ll end up controlling Kate all by her lonesome in the Homestead chapter.

When the aim-and-stab moment occurs, do not kill Connie. Just let the timer expire so Connie ends up barking and running away. Funnily enough, Du’Met will just bring his axe down and hit a can of tomato sauce. That’s because Kate’s survival is assured… for now.

From there, make sure that Kate is able to rescue Mark in the Lighthouse chapter by investigating the door. This ensures that you’ll still get the Lake finale. If they both get captured, you’ll get the Ultimatum finale, which won’t involve escaping with Connie. 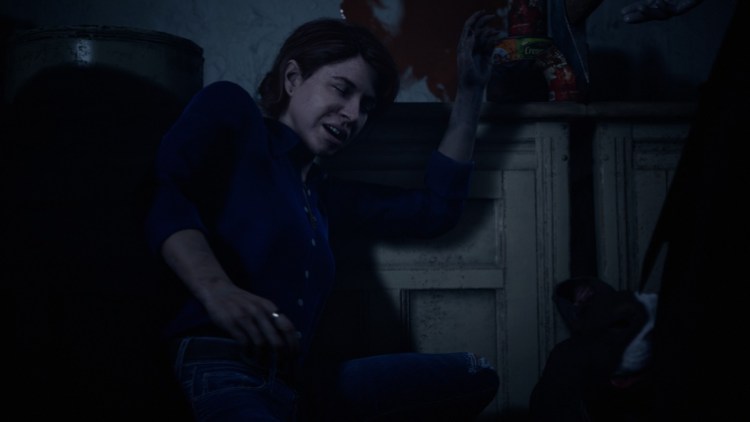