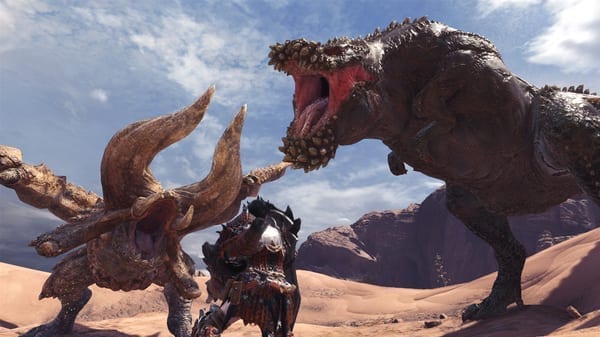 Monster Hunter World on PC has finally gotten the Deviljho update. It remains to be seen if players even want this hyper-aggressive terror showing up randomly during their hunts. But I suppose that random and unpredictable element is what makes Monster Hunter so fun.

Capcom has just dropped the update today, which includes the Deviljho as well as his weapon and armor sets and the Vagnis armor sets. It also adds a Dragonproof Mantle, which does what it says on the tin and blocks Dragon Element damage. A new costume for the Handler is coming too: the Astera 3 Star Chef Coat. Because we have to keep her in the cutting-edge fashion.

To all players aching to get on hunting this monster, here’s how you do it: Just complete the “??? Rathian” investigation in the main story. After this, Deviljho will show up whenever he wants in 6-  and 7-star quests as well as high-rank expeditions. And based on my playthroughs on console, he wants to pretty much all the time.

PC players who never had the chance to fight him are in for a treat. The Deviljho is surprisingly fast and agile for his huge stature. He does not give you any moment to rest, so you should prepare yourself before the fight. He’s classified as a Brute Wyvern, and his weak spots are in his head and his stomach. You can sever his tail, but you had better do it near the end of the fight. Because when Deviljho sees his own recently detached tail, he just eats it like the disgusting monster he is.

You should bring Thunder or Dragon weapons to fight him. The Dragonproof mantle that’s being added also buffs up Dragon weapons, so it’s pretty useful for taking Deviljho out. First-time hunters might find it hard to always be wailing on his head though, so focus on his legs and sneak in headshots every once in a while. He also has a devastating Dragon breath attack which he’ll use once he’s enraged. All I can say is don’t get hit. And if you do, hopefully you have a Nulberry on hand to cleanse the blight affliction.

So there it is hunters: the Deviljho update. While this isn’t a comprehensive list on how to defeat him, most of the fun of Monster Hunter is figuring out monsters on your own. So go on and give him a try. I believe in you. Just make sure to eat at camp before your fight.