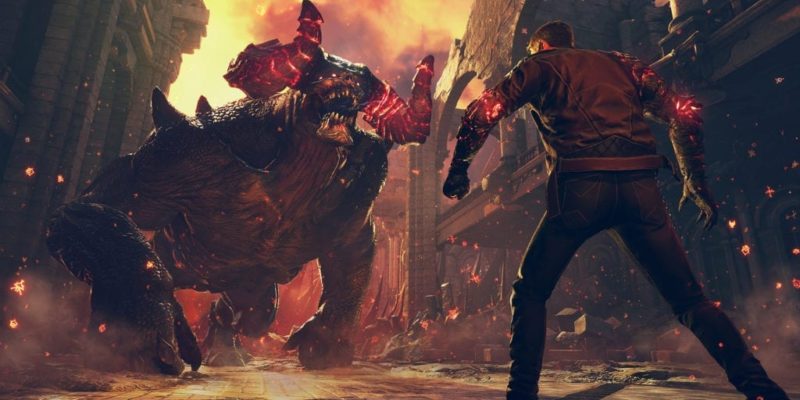 Devil’s Hunt had been teased around July of last year. It was reported that a PS4 and Xbox One version was to release in tandem with the Steam version. The developers, however, decided to delay the console releases until early 2020. In addition, they announced a Switch version that will launch alongside the other console copies.

The game is based on the novel “Equilibrium” by Paweł Leśniak, which explores the everlasting conflict between good and evil. The story follows a human-turned-demon named Desmond. Originally, Desmond was an ordinary human who faced a sequence of unfortunate events throughout his life. He eventually winds up making a deal with the Devil and obtains demonic powers. After that, he finds himself thrown into the middle of an everlasting war between the angels and demons. Tasked with choosing a side, he serves as the determining factor in the war’s outcome.

Throughout his journey, Desmond struggles between maintaining his humanity and giving into his vengeance-driven demonic tendencies. In Devil’s Hunt, players will travel back and forth between hell, modern America, and an ancient city to help Desmond decide which side to aid.

The newest trailer gives more insight into Desmond’s position in the war.

Two sides of the same person

Devil’s Hunt is said to be a story-driven adventure. The game boasts roughly two hours of cutscene footage, with plenty of action-packed combat in-between. The combat focuses around a variety of melee attacks and combos. Additionally, players will need to manage Desmond’s human and demon forms. Each form will offer different strengths. Utilizing each one to its fullest potential will help players gain advantages when needed.

Layopi Games has scheduled Devil’s Hunt to release on September 17 on the Steam store. The game will release on all other platforms in 2020. Although it currently has no official price or set console release date, fans can follow Layopi Games and 1C Entertainment on Twitter for updates.

The Church in the Darkness review – May get a cult following