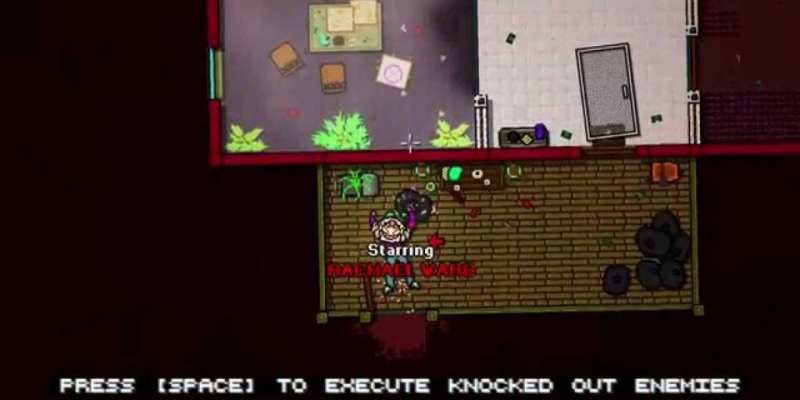 A bit of context, first. Kotaku Australia got their hands on a copy of the Australian Classification Board’s report on the game, which reportedly refuses classification on the basis of implied sexual violence.

WARNING: The description below describes the scene in detail, which you may find disturbing. You have been warned.

Here’s the bit of the report in question:

In the sequence of game play footage titled Midnight Animal, the protagonist character bursts into what appears to be a movie set and explicitly kills 4 people, who collapse to the floor in a pool of copious blood, often accompanied by blood splatter. After stomping on the head of a fifth male character, he strikes a female character wearing red underwear. She is knocked to the floor and is viewed lying face down in a pool of copious blood. The male character is viewed with his pants halfway down, partially exposing his buttocks. He is viewed pinning the female down by the arms and lying on top of her thrusting, implicitly raping her (either rear entry or anally) while her legs are viewed kicking as she struggles beneath him. This visual depiction of implied sexual violence is emphasised by it being mid-screen, with a red backdrop pulsating and the remainder of the screen being surrounded by black.

Devolver have now responded to this in a blog post, and they don’t appear overly happy with the ruling for a number of reasons.

“First, to clear up any possible misconceptions, the opening cinematic that was first shown in June of 2013 has not changed in any way,” reads Devolver’s response. “We also want to make clear that players are given an choice at the start of the game as to whether they wish to avoid content that alludes to sexual violence.”

“Second, in response to the report itself, we are concerned and disappointed that a board of professionals tasked with evaluating and judging games fairly and honestly would stretch the facts to such a degree and issue a report that describes specific thrusting actions that are not simply present in the sequence in question and incorrectly portrays what was presented to them for review.”

You can judge for yourself, though. Devolver have posted up the sequence in question – with “Skip scenes that allude to sexual violence” both on and off, so you can see both permutations of it – and you can see it below. As this appears to be Hotline Miami 2‘s opening scene, it doesn’t look like you need to panic about spoilers.

Devolver apparently have no plans to officially challenge the ruling, but have been in contact with the Australian Classification Board about the matter. Whether or not they and Dennaton force the Australian version of Hotline Miami 2 to run with Implied Sexual Violence off or not, I suppose we’ll have to wait and see.

Hotline Miami 2: Wrong Number is due out in early 2015. But not in Australia.

Neocore’s Deathtrap gets a release date

By Chirag Pattni18 hours ago
News