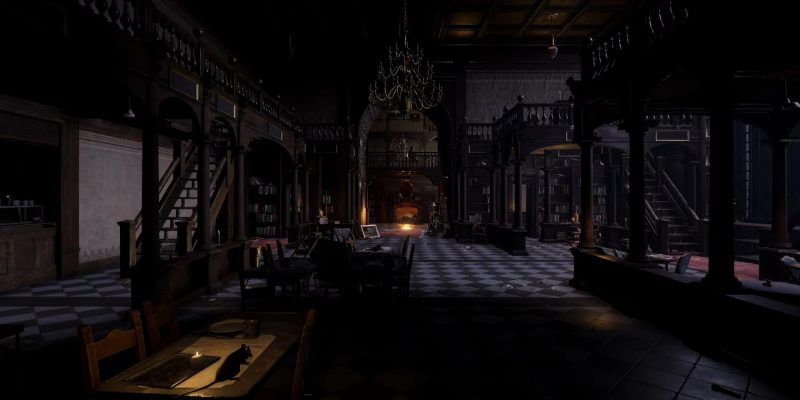 Devour, the co-op horror game that had you sacrificing goats, has just received a major update. A new map, called The Asylum, is live starting today. The update includes a new playable character, as well as a host of bug fixes. But that’s not all. In today’s blog post for the Devour update, the team hints at what’s coming next for the spooky game — including another map, coming just in time for Halloween.

The Asylum has you on the run from a new, horrifying enemy. Devour‘s first supernatural antagonist was Anna, who could only be exorcised by sacrificing some poor, little goats on an alter of the damned. In The Asylum, the creature breathing down your neck is Molly Jackson, a sunken-eyed woman with a creepy Joker smile. What’s she so happy about? Probably the thought of killing the crap out of you and your friends. Naturally, this being an asylum and not a farm house, Molly trades Anna’s demon hoard with “deranged inmates” who wander the halls crawling with rats.

The Devour development team didn’t just set out to release a new map in this update. According to today’s blog post, the developer was set on upping the bar with The Asylum map. A new visual style supported by better graphics, motion-captured animations, and revamped audio set the mood for the new map. There’s also new character you can play as, Kai, described as a “laid back guy.” Judging by his picture, he seems like a cool dude to hang out with. It’s a shame that all of our future hangouts will likely involve running and screaming.

You can’t fix everything, but you can certainly try

Along with the new map and other additions, the Devour team did a round of fixes and bug stomping. The 1.2 changelog goes over a small list of changes. Devour will no longer support custom server names, and that makes me think there were a few players who went a bit wild. Animal pathing has been changed. Their movements are going to be random, and they’ll stop searching for food if the path to it is blocked. Demons can now use the stairs a bit better, but on the flipside they can be banished during their spawn animation. There’s plenty more, so be sure to give it a read before jumping back in.

The developer has also detailed what’s next for Devour. More playable characters are on the way, as well as new cosmetics. And it won’t just be another robe. Steam Trading Cards are also being created for the game. Finally, the team plans on shipping out a new map before Halloween this year.