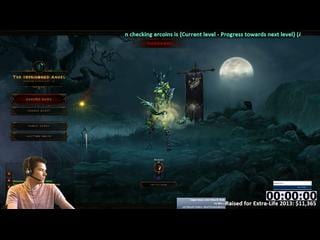 A few ARPG devs hit a charity live stream last night to discuss their games and Blizzard’s Wyatt Cheng dropped in to share some updates on Diablo 3.

The discussion was fairly open with topics jumping all over the place but there were a few nuggets of decent info to be had. Cheng mentioned that the development team were looking at a self-found mode for the game, a way for players who don’t use the auction house or trading to be flagged as self-found characters.

Wyatt: We’ve given it a lot of thought. Right now I’m playing some self found Hardcore; alternating time on that and my higher level Paragon softcore characters. We like the idea of self-found, and of course players can just do it themselves, but ideally there would be some kind of recognition or insignia to denote self found characters.

An issue is trying to do it without cluttering up the UI. There’s a balance between giving expert players the options they want while not complicating things for other players. (Such as with Elective Mode and advanced tool tips.) Do we want another check box on the character creation screen?

I do think it’s a very cool way to play, but we don’t want to force it on people who don’t want to play that way. I know we’re non-committal about things a lot and some of the fans get frustrated, and I apologize for that. But our development process is super-iterative, and we’re always changing things around as we tested them out. And I don’t want to promise anything we might eventually test internally and then decide not to implement.

We’ve talked about making some kind of self-found insignia that would be on every character by default. So you’d create a character and they’d be self found until you traded or used the Auction House.

Gold sharing is another issue. Playing self found requires you to note how much gold you have to start with, so you don’t accidentally spend more than your character accumulates. We’d like to put in something that would let players show each character’s gold individually, but there’s no ETA on that.

Could we see some sort of self-found ladder?

Travis: Maybe. Again, sorry to be so non-committal, as they often are. It would be cool, and it’s come up internal discussions, but he can’t say more than that.

Whether an Ironborn mode ever makes it into the game is another matter but at least we know they are testing this out and moving towards a version of Diablo 3 that would appeal to fanbase and not so much the casual player.

The discussion spanned a few hours but if you’re time is precious you can read a transcript of the important points on Diablo: IncGamers now.

Dota 2 and you: Confronting the most daunting title in PC gaming

By Laura Shortridge-Scott44 mins ago
News