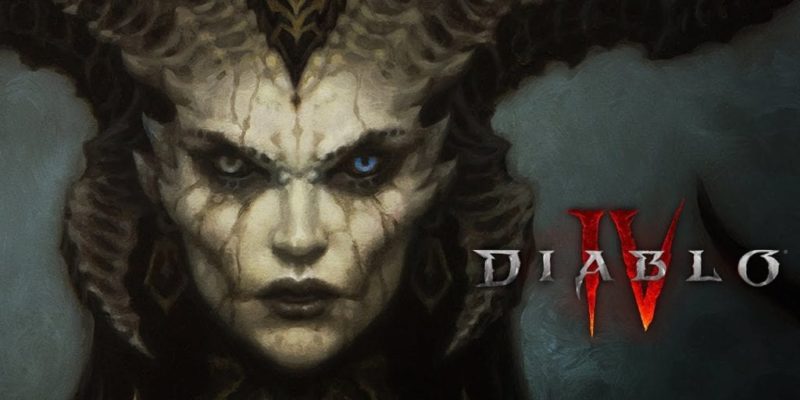 Blizzard announced Diablo IV at BlizzCon on November 1 and followed it up with several panels and interviews about the game. Although we’ve only seen a snippet of gameplay, there is already a lot of information out there about the game. Here we will go into depth about everything we know about Diablo IV.

First things first. There is no confirmed release date for Diablo IV. There isn’t even a release window. According to game director Luis Barriga, we won’t return to the world of Sanctuary for quite some time. “A game of this scope takes time,” said Barriga. “We’re not coming out soon. Not even Blizzard soon.”

However, that doesn’t mean that Blizzard will keep us in the dark. Starting next year, Blizzard will release quarterly updates about Diablo IV on the official Diablo site.

At least three classes are returning from previous games

So far we know that three of the five reported classes are returning from previous games: the Barbarian, Druid, and the Sorceress. The three all made their first appearance in Diablo II, and the Barbarian was also in Diablo III. 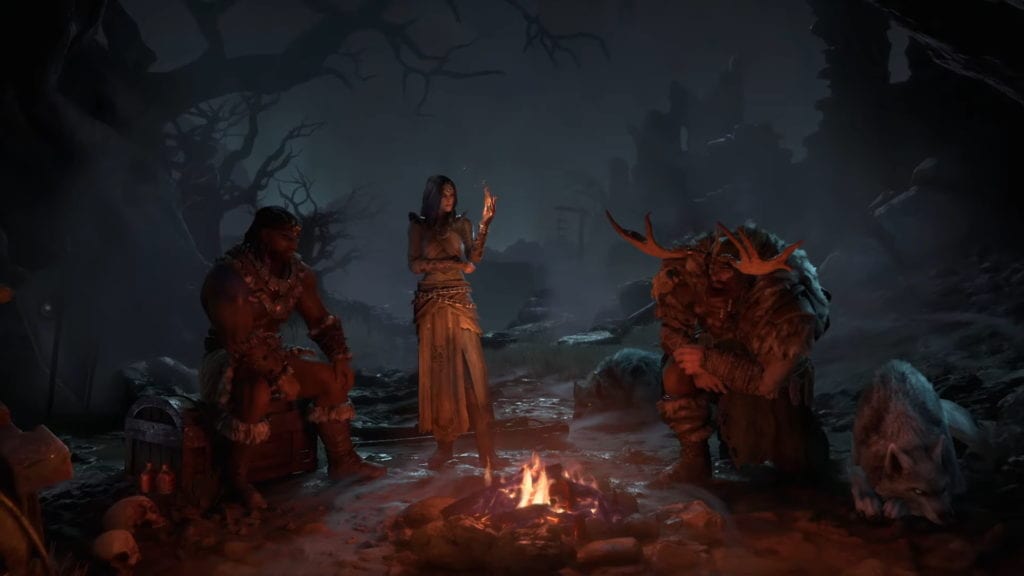 Expect the classes to have abilities similar to those of their predecessors. The Barbarian can wield mighty two-handed weapons or dual-wield, and it looks like his highly mobile gameplay will return. The Sorceress uses various elements to destroy her enemies, echoing the ice, lightning, and fire skill trees from Diablo II. The Druid we saw in the Diablo IV trailer looks like a medieval tank that can also transform into a werebear or werewolf to dish out massive amounts of damage.

There isn’t any word about the other two classes.

There will be skill and talent trees

Diablo IV will feature two separate trees for each class: a skill tree and a talent tree. Players can learn skills to create their build, and it looks like there will be various paths for you to go down. For example, the Barbarian has a Fury path that features skills like Rend or Double Swing, and a defensive path that allows you to buff yourself and allies. You can also rank up specific skills. The images we have seen this weekend are a work in progress, but they give us an idea of how the skills will function in the game. 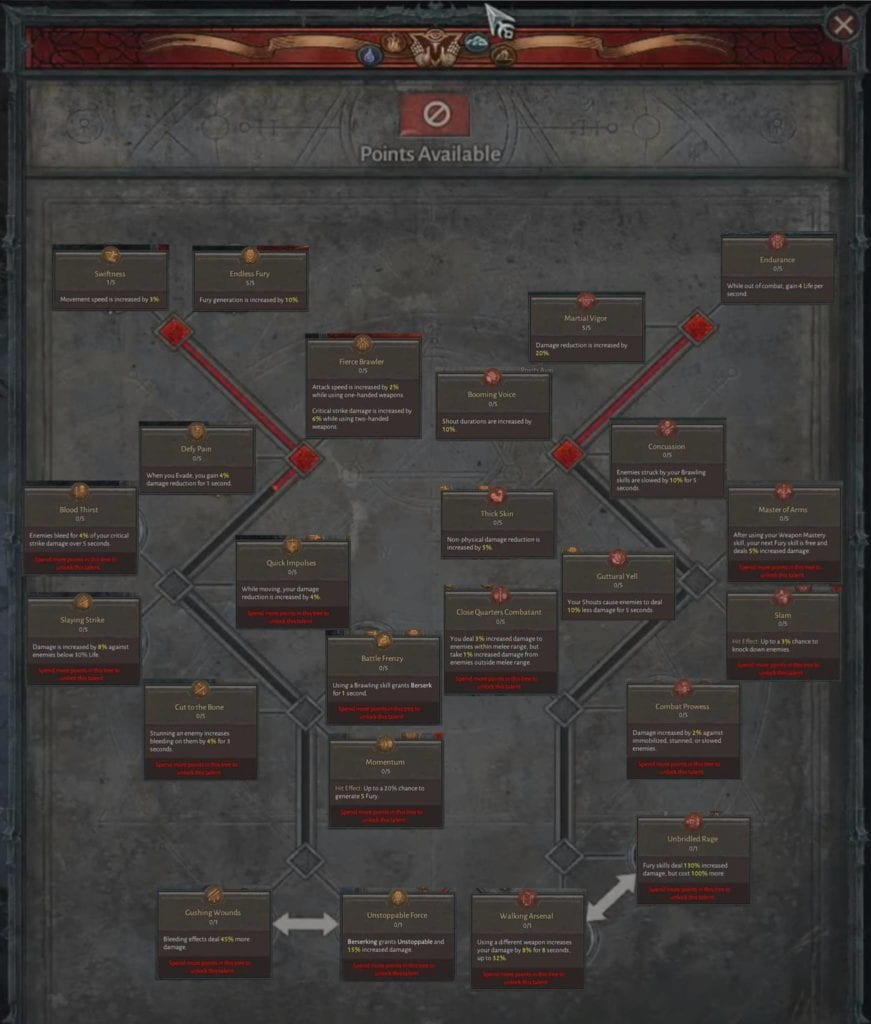 The talent tree will convey passive upgrades to your character. You might increase your Barbarian’s chance to cause bleeding, increase effects such as berserk, or increase generation of fury (which should be the Barbarian’s skill resource, similar to in Diablo III.)

Check out our in-depth article for more information about the skill and talent trees.

Diablo IV will be a shared world with no offline play

Diablo IV is going in a new direction. There are no more isolated overworld zones you teleport to. The world is one contiguous landmass, and except for dungeons, you’ll be running (or riding) seamlessly from location to location. It will be a shared world and you’ll be running into other players along the way. The only exceptions to the shared world are story beats and important campaign missions.

There are some concerns here. A few journalists who played the game at BlizzCon mentioned that they worry Diablo IV‘s shared world will detract from the lonely, grim experience of the previous games. This is further exacerbated because you cannot turn off the offline mode. You will always be playing in a shared world. I primarily play ARPGs like Diablo solo, and while I’m not yet ready to write off the new direction, it might be strange to see other players running around in my Diablo IV playthrough.

There are five regions

Diablo IV won’t be a linear experience. Players can choose to travel to whichever region they like in any order. Each region is connected contiguously with no loading screens. This means that you can add a little variety to your playthroughs instead of following the same path every time. 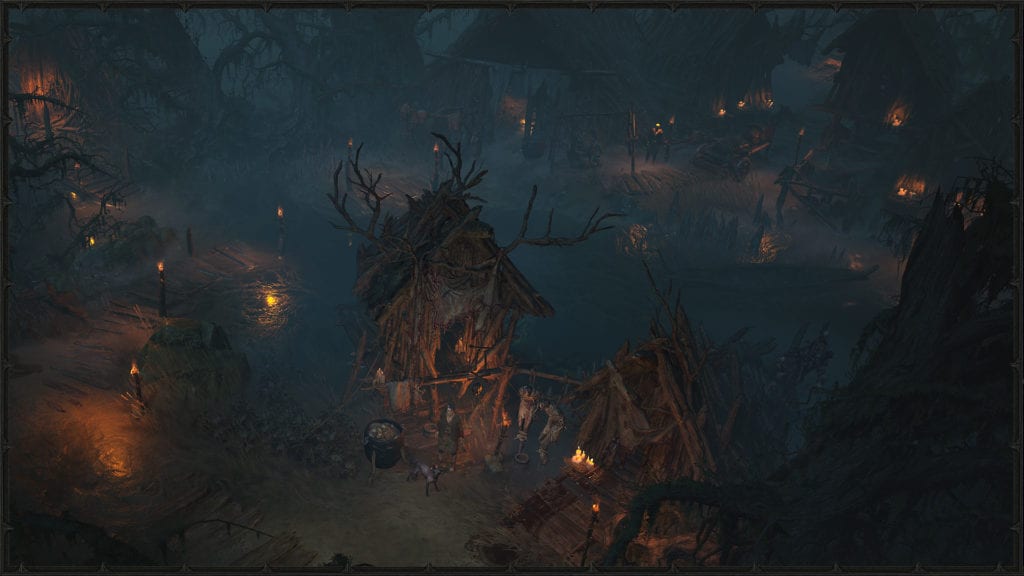 The regions introduced so far include the following: Scoslgen, a rainy, forested land that is home to the druids and full of werewolves and the drowned dead; Fractured Peaks, a secluded mountain range full of dark caves beneath its snowy peaks; the Dry Steppes, a desolate wasteland replete with bandits and cannibals; Hawezar, a swampland home to witches, serpents, and other creatures; and Kejhistan (seen in Diablo III), a desert landscape where cultists seek to summon forth the three Prime Evils once again.

There is a new loot tier: Mythic

Diablo IV is continuing the tradition of grinding for that sweet, sweet loot. We will see the return of normal and magic items that you quickly discard and forget about around level three, and rare items will also make a return. According to the BlizzCon panels, an effort is also being made to better balance legendary and set items. In Diablo III, a common complaint was that sets were the be-all, end-all to the game. In IV, sets and legendary items should be on equal footing. Additionally, there will be ancient legendary and ancient set tiers, plus the new highest tier of all, mythic. 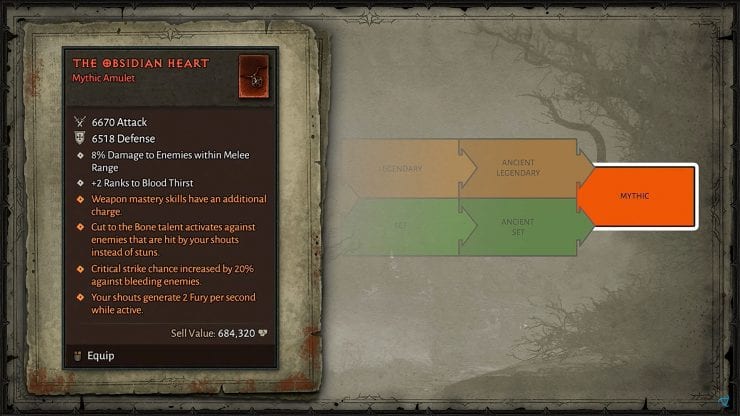 Players will only be able to equip one mythic item at a time, similar to how exotics work in Destiny 2. Mythic items will have one specific trait that is always present. For example, the mythic amulet Obsidian Heart dishes out 8% of your damage to enemies with melee range and provides +2 ranks to Blood Thirst. The other four stats (the ones in orange) will be drawn from a random pool. This might provide more flexibility in applying mythic items to your build, but it might also mean you’ll be doing a lot more grinding to get those exact stats you want. But we all know grinding is the name of the game in an ARPG.

Dungeons in Diablo IV will be separate, instanced locations. You can bring in up to a party of four into a dungeon. Blizzard is also adding a new system that they call Keyed Dungeons. Players will find keys in the world of Sanctuary and upgrade an existing dungeon into an endgame version with increased rewards, dungeon affixes, and higher difficulty. This sounds similar to the map system in Path of Exile, but you can’t fault Blizzard here: Maps have been extremely successful for Grinding Gear Games since they were introduced.

Lilith appears to be the main antagonist

No word on whether or not ol’ Diablo will be coming back in Diablo IV. Barring another surprise reveal at the end of the game, the apparent villain this time around appears to be Lilith, one of the two creators of Sanctuary and the mother of all mankind. She’s introduced in an appropriately grim cinematic and will certainly pose a significant threat to the denizens of Sanctuary. There is plenty of lore about Lilith, which means there is also plenty of speculation.

David Brevik, who created the Diablo series, seems pretty optimistic about the direction of Diablo IV. In a series of Twitter posts, Brevik gave his take on the upcoming game.

4) the core meta-game (online, hubs, etc) seems like something I would design. It’s almost like Marvel Heroes meets D2.
5) as for the rest of details, gameplay etc, I think it is too early to tell. Things like that change often so we will wait (years) to see.

Diablo III was widely criticized because its story, graphics, and tones seemed to drift away from those of the game’s predecessors. Brevik seems to think that they are going in the right direction, and I have to agree that Diablo IV seems to offer up a return to a darker Sanctuary. He also seems to agree with Blizzard’s decision to make Diablo IV a shared world, which might help allay the fears of fans who worry about it ruining their Diablo experience.

Keep up with PC Invasion for updates on Diablo IV, and check out Blizzard’s extensive overview of the game as well.