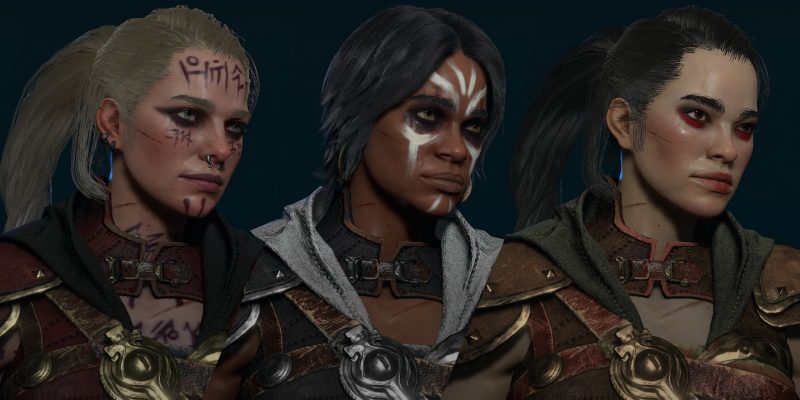 The Diablo IV development team has returned with another quarterly update. Today, they dive into the art of the game, ranging from characters to monsters, as well as the series’ return to realism. The update starts off with a feature that’s new to the franchise. Diablo IV will include some in-depth character customization options, allowing you to personalize like never before.

No two Barbarians will be alike, promises Diablo IV Game Director Luis Barriga. The game will offer what the team calls a “Lair scene” and Wardrobe system, where you can take the time to create the demon slayer of your dreams (or nightmares). The update showed off several options, including a “variety of personas,” skin types, eye color, makeup, hair color and style, and tattoos. Included is a shot of a sorceress, sporting runic tattoos and red eyes with pale irises — perfect for that vampiric look. Various dyes can be used to color your character’s armor.

“Diablo IV offers players more customization options than ever in a Diablo game, which makes achieving that result more challenging, but the outcome is well worth it,” Barriga wrote. “Your Barbarian is different from anyone else’s but still feels undeniably like a Barbarian.”

Waiting on that bright green mohawk

John Mueller, art director for Diablo IV, discussed the return of realism. Diablo III was criticized for its more cartoon-like visuals, in a way that pivoted from its predecessors. Diablo IV, however, is putting the dark back in ‘dark fantasy,’ though Blizzard is moving with caution in mind. Mueller comments that the team had a “concern about leaning into ‘realism’ in a way that wouldn’t have that hand-crafted feeling we felt was fundamental to a Blizzard game.” The team sought to strike a balance, with the goal of preventing these characters from looking too “generic.” To achieve this, the art team upped the details.

“We made massive improvements to the level of detail, the surfacing of complex materials like skin, cloth simulation, hair, fur, metal, even down to the details of the highlights of the eyes and rivulets of perspiration,” Mueller explained.

The end result, of course, would mean a ton of work.

“These solutions had to work not just for a single character, but for hundreds of componentized armor sets, different body types, dozens of unique personas, and completely unique art for five distinct classes (to start),” Mueller continued. “This was an entirely new challenge for our team to tackle.”

Diablo IV will take advantage of your personalized character in how it handles cutscenes. Every cutscene in the game will be rendered by the in-game engine, instead of being cinematic like in previous games. This means that you’ll have close up shots of character with the look you worked hard to create.

The Diablo team is pushing its penchant on realism onto the game’s monsters as well. For example, the image of Lilith above was taken from an in-game cinematic, with the team writing that this “level of detail is now standard for how we present the major NPCs, classes, and monsters in Diablo IV.”

The update showed off many monsters in the pipeline. And a few of said nasty beasties are, well, pretty disturbing. I with I didn’t have to see the “spider head, egg-sack dude” today, but here we are. There’s also a animated close-up of a dog monster that has, just, way too many heads. Plus the Blood Bishop with his horrible, fleshy tendrils, and the Skeleton Lord, which somehow manages to look the least ghastly.

Be sure to check out the rest of the Diablo IV Quarterly Update. We won’t see another one for a few months. 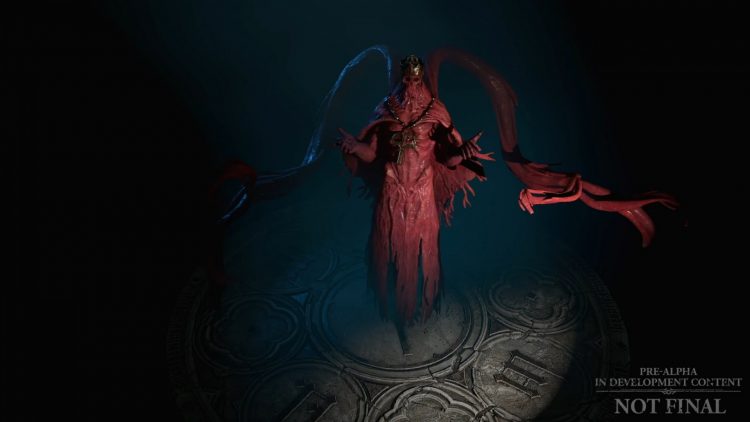 By Sam Robins49 mins ago
News