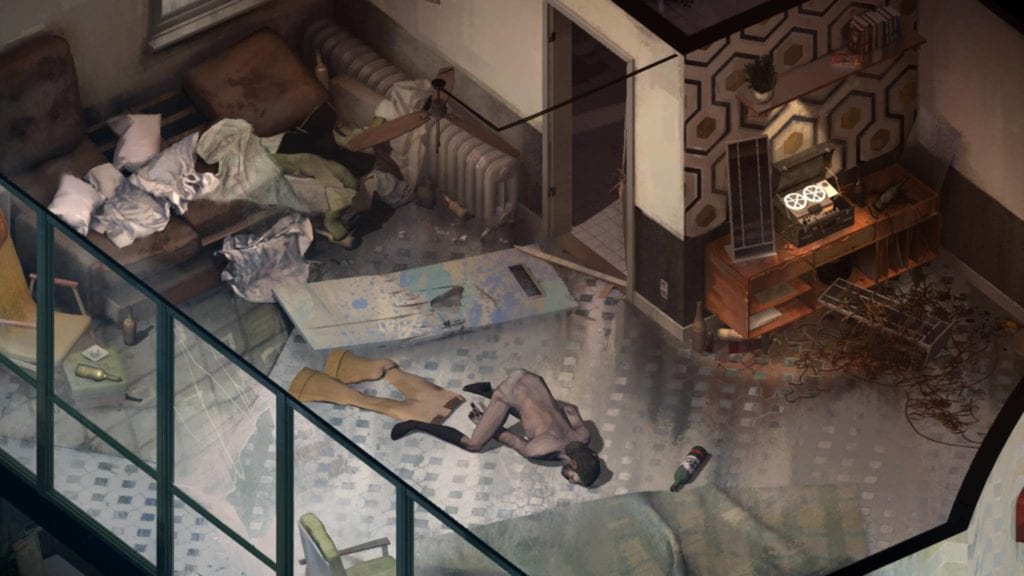 Disco Elysium is a surreal fever-dream of a game. I’ve vomited four times, argued with my necktie, said some truly horrific things to a bartender, attempted to open an investigation into a non-existent missing cockatoo, and hugged people to spread communism. And believe me, that’s just the tip of the iceberg.

Disco Elysium also killed my first character with a ceiling fan within three minutes of finishing character creation. I’m very much still making my mind up about the game, but this is the sort of story I want to share.

Disco Elysium and the ceiling fan of doom 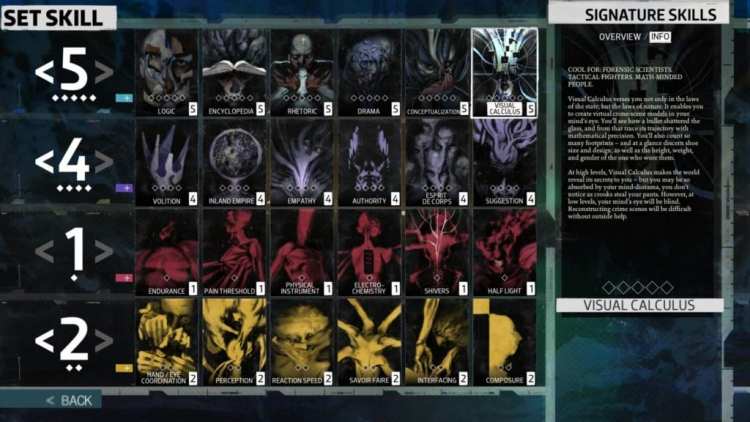 Character creation is enjoyably meaty, even if I have little idea what my choices mean down the line. Six is the highest any of the four statistics – Intellect, Psyche, Physique, and Motorics – can go, and with eight points to share between them, this meant I was going to lack in something.

I opted to venture into Disco Elysium as a smarty-pants cop, with a focus on Intellect but a degree of Psyche so I can suss out lies and have some empathy. Which, alas, means I’m in terrible shape and have terrible motor skills.

Character creation also offers up a choice of Signature Skill. This is effectively “what skill do you want a free point in,” but it also increases the maximum that skill can reach without outside help. I’m all for Visual Calculus because I want to be able to do the Sherlock thing of seeing a crime scene in my brain and immediately figuring out who was there and what they did. 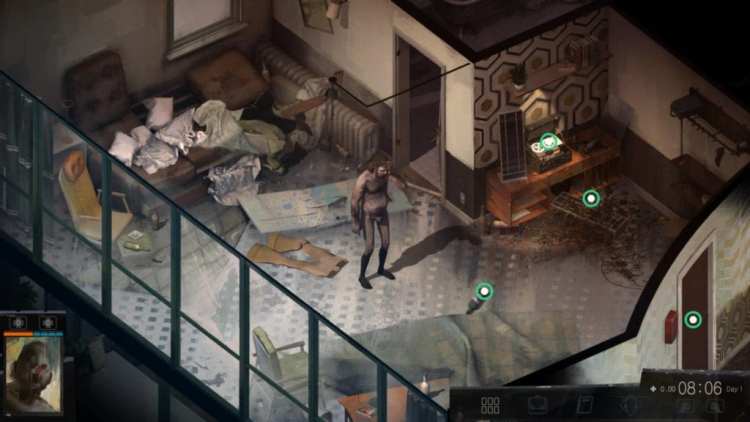 My dreams of being Sherlock Holmes were slightly dashed by the opening sequence. Disco Elysium quickly establishes your character as being a complete wreck of a human being (which, now that I think about it, would fit some Holmes interpretations). You begin in conversation with parts of your brain — offering the glorious dialogue line of “Help! Someone! Cut my head off, it’s trying to murder the rest of me!” — before you’re jump-started back to life with a murderous hangover.

A murderous hangover that was, apparently, caused by an almost literally murderous amount of drugs and alcohol. Our Disco Elysium protagonist can’t remember his name, job, or anything else about his life. Your first task is to stumble around the hotel room and find your clothes, and it was this dangerous task that cost me my life. The pants, at least, were obvious.

The green dots on the screen represent things you can look at for flavor text. Holding down Tab shows all hotspots you can actually interact with, which is how I found one shoe, hanging on the rack near the door. 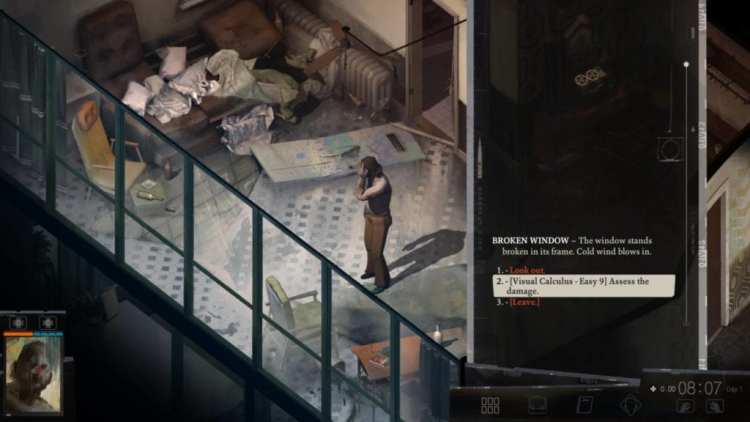 I did get a chance to put my Visual Calculus to use, though. That broken window to the left was clearly something that needed investigating, and it didn’t take much brainwork to figure out that I’d… lobbed my other shoe through it. Unfortunately, pondering that maybe someone else threw the shoe led to me being sassed by both my Visual Calculus and Logic skills. Thanks, game. 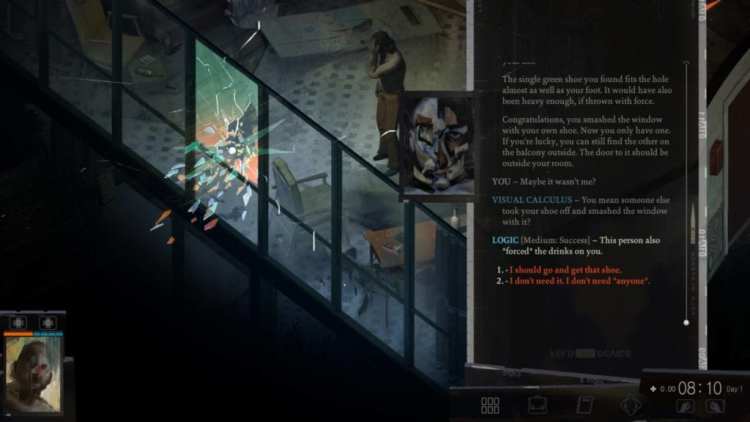 While I should probably have tried to find my shirt and jacket first, my tie was obvious: it was looped around the rotating ceiling fan. My nemesis.

Pretty much everything in Disco Elysium works on dice. Mousing over any skill check shows your percentage chance of success, but failure and success are guaranteed on all 1s or all 6s. Wonderfully, just about anything can modify these chances. In a persuasion task, being nice to someone in the conversation beforehand (or establishing yourself as a tough guy) might give you a better shot of success. Throwing people off-guard by asking off-kilter questions or examining parts of the surroundings may assist with other skill checks.

From what I know, even combat works like this. Combat is incredibly rare in Disco Elysium – I’m five hours in and I’ve encountered exactly none of it. But from what I can gather, it works off a dialogue tree and your various options will impact the success of your options. Letting people agitate you might make a tricky shot harder; conversely, taking stock of your surroundings or taunting foes may get you an advantage. Diplomacy might avoid a confrontation or it might let people get the drop on you. But that’s all based on a dev blog from a year ago, so it may have all changed. 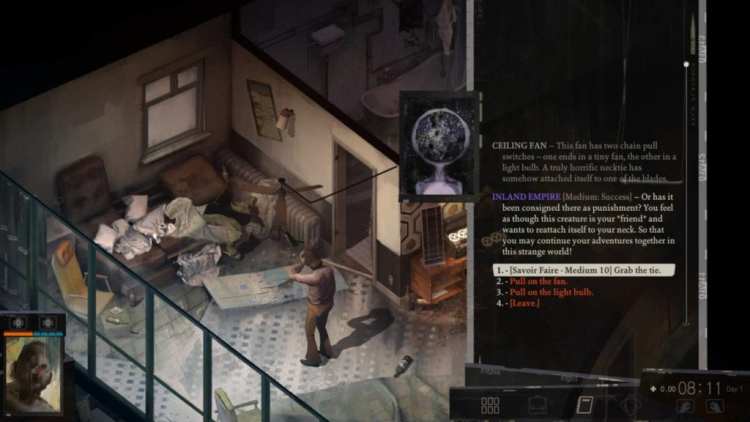 Anyway! Back to the ceiling fan, which unfortunately was not a combat encounter (although I’d probably have lost anyway). I could’ve turned off the fan, but I figured… well, what’s the worst that can happen? Even though my chances of successfully grabbing the whirling tie were a mere 27% because my motor skills are appalling, I figured it’d be amusing.

Reaching up for it caused intense pain, and what I didn’t realize at the time was I only had a single hit point because of my crap physical stats. Good morale to ward off psychological threats, but not much in the way of physical resistance. Which means that the intense pain… 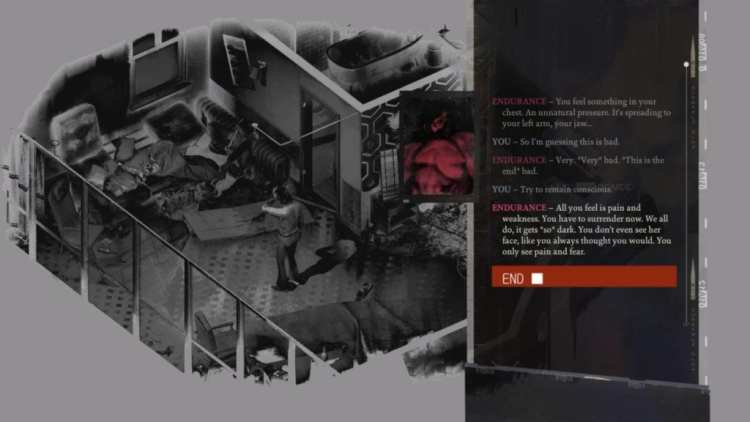 … led to a heart attack. Rest in peace, detective whose name I didn’t even learn. You died due to reaching up towards a ceiling fan. That’s pretty much NetHack-levels of idiotic death. 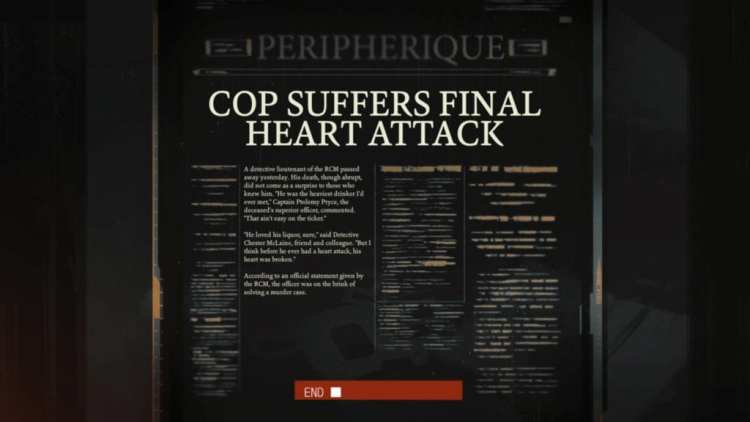 Disco Elysium is an incredibly odd game. It’s crude, offensive, and mind-bogglingly weird. It marries all of this with lengthy socio-political dialogues and a world whose history I can’t even begin to understand. But the systems underpinning it are clever and solid, and the situations I’ve found myself in (and my methods for resolving them) have amused me to no end so far.

With only a few hours under my belt at the time of writing, I’m not even close to having a definitive opinion on it, but at the very least it’s given me some stories to relate. I mean, how often do you get a chance to write about a death-by-ceiling fan?

Apex Legends will get an updated training mode soon