Dishonored 2, like Fallout 4, is almost certainly in the works. The first game did very well, exceeding Bethesda’s expectations. That pretty much guarantees a second installment from Arkane.

However, that doesn’t mean the information about a sequel that has been ‘leaked’ over the past few days is genuine. Frankly, it looks more than a little dubious. Remember the Survivor2299.com stuff relating to Fallout 4? This is feeling like a less capable re-tread. 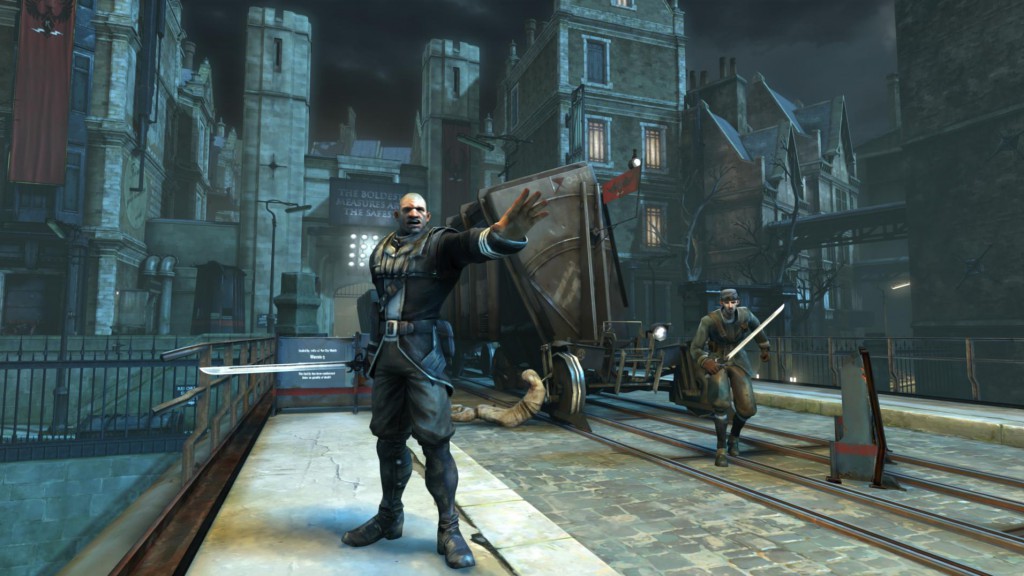 More of this sort of thing would definitely be welcome.

When asked about the Dishonored 2 logo image, Bethesda gave us their standard response to things like this: “we don’t comment on rumour or speculation.” Unfortunately that doesn’t really add much to the debate either way, as it’s their default response to everything that isn’t officially released by their marketing and press departments.

Arkane might be the next place to go to look for confirmation, but given that their last interaction with the games media led to them referring to the press as “sneak fucks” over the Prey 2 affair, it’s unlikely they’d be too helpful.

So, with no official way to confirm or refute the images, it’s time to rely on good old sleuthing skills and experience. Stop laughing at the back there.

It’s a nice logo. No complaints there.

Consider the source for these details. Thanks to this NeoGaf thread on the subject, we know that both the initial logo image and the ‘Fact Sheet’ came from the same place. They were sent to a JustPushStart writer who says he’s never been contacted by this person before and has no way of checking their authenticity.

The first email reads “That might be of interest for you. Cant tell my sources. Your choice.” and the second states that the images were “part of an internal presentation of Bethesdas E3 2014 coverage … We saw this as part of an interactive Powerpoint Presentation (more infos when they clicked on the fields, videos, etc).”

Already, this source seems thin at best. The emailer can’t reveal their own “sources” but then returns to say they were actually present at an internal Bethesda demonstration of the game. At first they seem to be someone who received the material second-hand, but by the second email they’re someone who was present, in person, at an internal Bethesda presentation. Despite seeming “more infos” about the game they don’t bother to say what any of that information was.

Maybe Bethesda threatened to do this to him.

But okay, maybe they are for real and are staggering the release of the information they have access to for some weird reason (a genuine source probably would not do this, staggering that kind of stuff only really makes sense if you’re marketing something.)

Let’s also consider how the images are being described. In the email to JustPushStart, the source says it’s from an internal Bethesda power point presentation. That would, I guess, explain the “for internal use only” statement.

But when it was sent to VG24/7 along with a suspicious clarification of the spelling mistake in the final panel (‘Acces,’ rather than ‘Access’) the image had mysteriously morphed into an “E3 2014 Fact Sheet” for press usage.

“In case you are wondering, the misspelling Access is due to being an early draft of the E3 Press-Fact sheet, which will head out at the end of March officially to the press. A corrected version is available,” that publication was told.

Well, which is it, internal presentation slide or E3 press sheet? And isn’t it a wonderful coincidence that the same source happens to have both the early draft and the “corrected” version on hand to send to the media.

The details about a new character and new powers, plus the new location of Tyvia are all fine, but easily invented (sequel to popular game has additional powers and new location shocker!) “Annihilate the Outsider,” is a weird premise, but it was a nice touch to add the trademark after his name. It’s noticeable that the majority of art assets used in this image come from the first game. The shape of Tyvia appears to have been traced from a map of Dishonored’s isles.

Multiplayer is a possibility. Dark Messiah did have a multiplayer mode. But Arkane has given interviews on the subject of avoiding adding multiplayer to the “aggressively single player” Dishonored. Even when they’ve entertained the idea, it’s been with the caveat of “not the traditional multiplayer.” A versus mode sounds painfully traditional.

That Windows 8 logo standing in for “PC version” in the final panel looks highly dodgy as well. Dishonored was a Steamworks game, so you’d imagine that would just be a Steam logo instead. At the very least, the standard PC DVD-ROM image. It would be crazy for Dishonored 2 to be a Windows 8 exclusive (especially since Windows 9 will be out by the time of the alleged 2016 release date,) so the Windows logo makes very little sense.

Jesus, Doom really is going to be late.

Speaking of that release date, if it’s not coming out for two years, is it likely that Bethesda would break their tendency not to announce things at E3 with an E3 reveal for a game due in 2016? And what gives with the pre-order Doom beta access tie-in? Are pre-orders going to be taken that early? Is the fourth Doom game really going to be that late (actually, never mind, that part is pretty believable.)

It looks rather like someone just lifted the idea of the Doom beta access from Wolfenstein: The New Order, right down to pointing people towards the url dishonored.com/doom (wolfenstein.com/doom was the place to go for details on The New Order tie-in.) That seems strange too; wouldn’t the url be darknessoftyvia.com/doom or something similar?

Given the amount of inconsistencies in the material, as well as the paper thin nature of the original source, this Dishonored 2 ‘leak’ looks awfully like a hoax. Considering how much less convincing it is than half the stuff which appeared on Survivor2299.com, it would be pretty hilarious if it turns out to be real. The chances of that, though, seem extremely slim.

As noted at the very start, Dishonored 2 is almost certain to be in development. When confirmed details do emerge, we’ll start getting interested. For now, it seems sensible to dismiss these alleged leaks as fake.

Tumblestone is the next game from developers of The Bridge