I don’t know about you, but I’ve been having a hard time waiting for the Dishonored DLC. It all sounds so promising – actual single-player DLC which gives us a look at another side of the game world, with other protagonists and other stories! And now, at last, we have the first pack: the Dunwall City Trials.

Okay, so Trials isn’t the story-based DLC for which we’ve been so impatiently waiting. Rather than giving us control of new characters, telling us new stories, and fleshing out the world, this is a pack full of stand-alone challenges designed to test each aspect of your assassin-y skills. In short: it adds the challenge maps from Rocksteady’s Batman titles to Dishonored, through a set of individually focused levels set in the eerie Void. 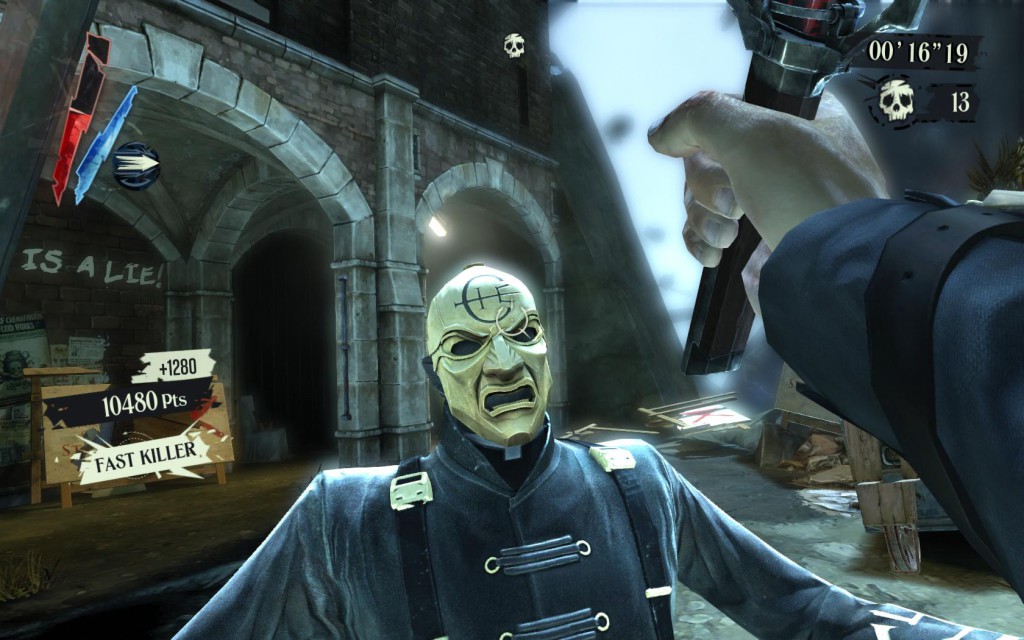 And truthfully, despite the fact that it’s not The Thing We Want, it’s a fair bit better than expected. On offer are ten levels (divided into Stealth, Combat, Puzzle, and Mobility challenges), six of which also have a super-hard Expert difficulty modification, and – wait! Do you hear that sound? That sort of… keening noise? I think it’s the hunting cry of a wild list. Here it comes now:

Mystery Foe (Stealth) – Locate four clues that point you towards the identity of your target and then pick them off, all without being seen.
Burglar (Stealth) – Sneak into a mansion to pilfer six expensive-looking decorative eggs, and – while you’re at it – make off with as much extra loot as possible.
Back Alley Brawl (Combat) – Wave-based battles that pit you against just about every foe in the game, with extra powers unlocked between rounds.
Assassin’s Run (Combat) – Armed with a crossbow and a cheat code for unlimited ammo, run through a building shooting a lot of people, but sparing civilians.
Oil Drop (Combat) – Armed with a pistol and a cheat code for infinite ammo, shoot falling whale oil barrels before they land on you and explode your face off.
Bend Time Massacre (Puzzle) – Plan out how to kill a large group of people in the space of one extended Bend Time, and then try to execute it flawlessly. Pun intended.
Kill Chain (Puzzle) – Plan out how to kill a large group of people, with less than four seconds between each kill, and then try to execute it flawlessly. Pun not intended, this time.
Bonfires (Mobility) – Scale walls and hop platforms like a PCP-addled lemming, in order to hit glowing red markers that extend your time and give you points.
Train Runner (Mobility) – Get through a multi-pathed obstacle course as quickly as possible.
Kill Cascade (Mobility) – Get to the exit as quickly as possible, while performing drop assassinations from absurd heights.

Don’t worry! The wild list has fled into the undergrowth. We’re safe again.

The pair of stealth levels are the pick of the pack, offering a gameplay experience that’s the closest to the base game. Mystery Foe is enjoyable on replays thanks to the way it randomises the clue locations and the eventual target each time, and the level offers plenty of ways to remain unseen, regardless of whether you favour hiding on ceiling lamps, possessing rats, or shuffling behind curtains. It’s perhaps a little small, but that’s about the only issue I have with this one.

Burglar, which has you breaking into a three-storey building full of secret rooms and hidden loot to be half-inched, is equally great. It also gets a bonus thumbs-up for having an Expert mode which adds in some extra things to pinch and completely removes all of your superpowers, turning it into an absurdly difficult version of Thief.

The next best are probably the puzzle challenges, which – thanks to having no hard fail conditions, instead letting you restart the round if you screw things up – are bizarrely relaxing. Both Bend Time Massacre and Kill Chain have you wandering around small areas, observing the people within and working out how best to kill them all with your limited equipment, before you finally kick things off and everything gets frantic as you race to do it all before time runs out. The rounds gradually increase in difficulty, with harder bonus rounds in between offering cryptic objectives, and there are extra points on offer for headshots and kill variety.

Is it weird that I find plotting mass-murder to be relaxing? Hmm. 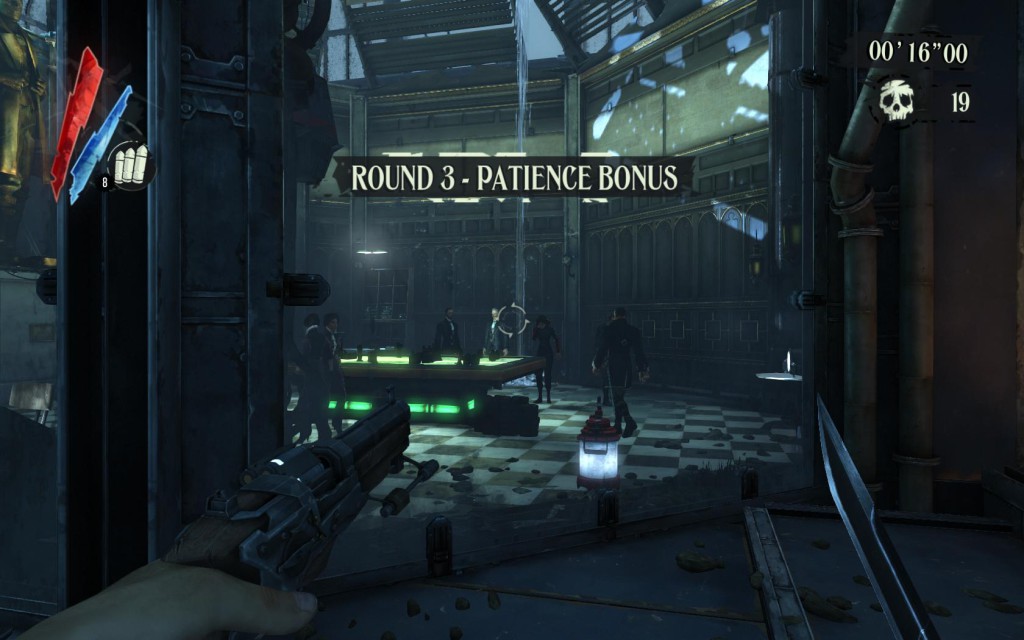 The Combat and Mobility challenges, on the other hand, are a mixed bag of sighs. Oil Drop is basically a forgettable lightgun game, only you’re using a mouse and a slightly-too-inaccurate pistol. Assassin’s Run sounds a bit like one of those training courses which have you shooting pop-up targets as you dash through, but in this case the targets fight back, and trying to gun down a horde of approaching Weepers or a bunch of teleporting assassins tends to quickly devolve into a slightly rubbish blastfest. It’s not exactly Dishonored at its best, if I’m honest.

Train Runner and Kill Cascade aren’t bad, exactly, but both suffer a little from being one-shot challenges. These are basically speedruns in which you try to find the best and fastest way to do things in order to shave seconds off your time, and while they work well at that, they’re not something you’ll keep coming back to. It also doesn’t help that Kill Cascade leans heavily on the slightly finicky timing for performing drop assassinations.

This leaves us with Back Alley Brawl and Bonfires, which are the best of their respective challenge types. Back Alley Brawl is wave-based combat, essentially; what seems to be a semi-random assortment of enemies spawn in, and you kill them all. If they’re of opposing factions, they’ll also try to kill each other. You’ve got opportunities to grab extra ammo, potions, powers, and unlocks between rounds, but it’s really all about stabbing/shooting/summoning rats at the guards/assassins/dogs. Which is fair enough, I suppose, and you can certainly try to handle it stealthily, or using whatever powers and weapons you want. Good for releasing a bit of violent tension.

Bonfires, on the other hand, has you dementedly hopping around a floating landscape to hit red beacons in a random order. Hitting one gets you points and extra time. There’s an undeniable joy to flying around the landscape as fast as possible, using sprint, double-jump, and blink simultaneously to traverse huge distances, but this is another mode that falls victim to slightly finicky controls. Aiming a Blink just right so that it would mantle onto a ledge could be a little tricky and a little annoying in the base game, and that didn’t pit you against a surprisingly tight time limit. It’s fun, but failure can be frustrating.

All of the challenges have a degree of replayability. There’s a doll hidden somewhere in every single one, and completion of the challenges to a high standard will also unveil part of a huge collection of rather gorgeous concept art, if you’re into that sort of thing.

You’ll also be playing them again and again because the challenges are really bloody hard. Part of this might be because I haven’t played Dishonored in, ooh, a few weeks, but they will test you. Getting the maximum rating of three stars is difficult enough on most of the normal challenges, and the Expert variations are appropriately named. 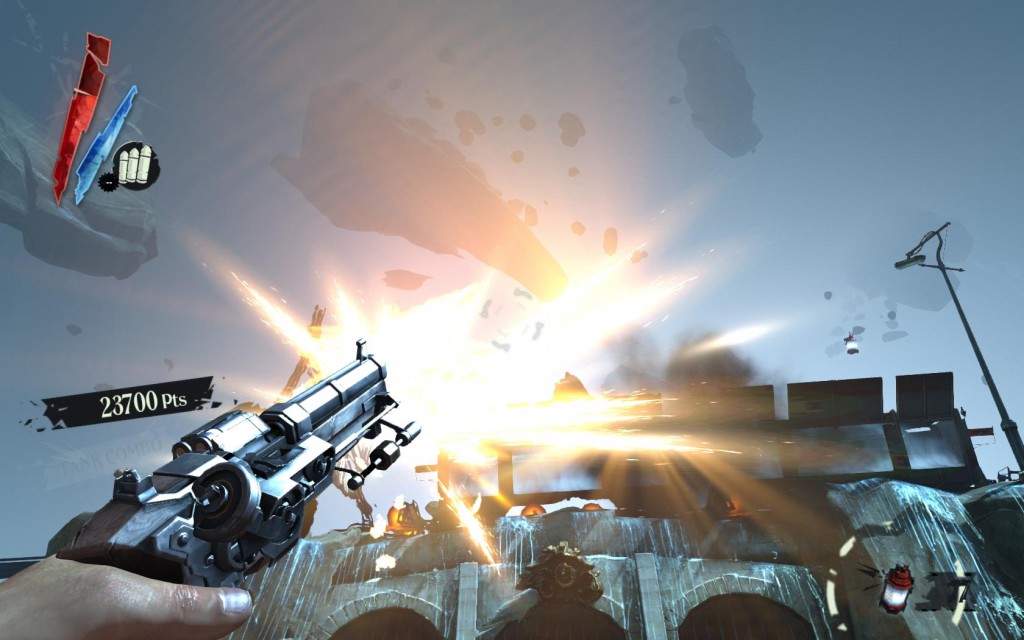 For £3.50 there’s a reasonable amount of content here, and I can honestly state that I haven’t regretted purchasing it for a moment. That said, you might have noticed a distinct lack of breathless enthusiasm in this review, and that’s because half of that content is a bit bland and very little of it really shows Dishonored at its best.

See, Dishonored wasn’t a game that worked because of its mechanics – it worked because of the way it combined those mechanics together, the way it gave you a vast amount of freedom, and the way the levels themselves had a genuine sense of place within the world, adding story through setting. With the exception of Burglar, none of these levels really do any of this. They test you to your limits, but most do this within very tight mechanical and artistic confines. The Void graphics – all floating props and impossible geometry – look lovely, but they don’t really tell you anything new about Dunwall.

Is there anything fundamentally wrong with this DLC? Nope. At its best, it’s a celebration of Dishonored‘s generally well-honed mechanics. At its worst, it’s an entertaining sideshow – and that’s the problem, really. It’s a sideshow. After Dishonored proved to be such a well-designed, freeform, and emergent game, it’s impossible for this to not feel a little disappointing and a little constrained.

You should buy the Dunwall City Trials. It’s astonishingly cheap, surprisingly sizeable, and most definitely enjoyable. You’ll just have a hard time avoiding a slight twinge of disappointment when you play it.

For more on Dishonored, why not have a listen to our Podcast Special about the game.

By Andrew Farrell10 hours ago
Hardware

By Keren Philosophales1 day ago
Hardware