If Knife of Dunwall illustrates one thing, it’s that Dishonored‘s base mechanics work really, really well. Yes, okay, my first half-hour with this DLC was spent falling off rooftops, completely missing guards with wristbow bolts, stumbling into arc pylons, and generally acting like a drunkard with a death wish, but that faded quickly. It didn’t take long before I got back into Dishonored‘s marvellous rhythm of hiding, sprinting, blinking, stabbing, and hiding once again, waiting to repeat. The way it quickly feels effortless and natural, despite being reasonably complex and thoughtful? That, ladies and gentlemen, shows a polished system. 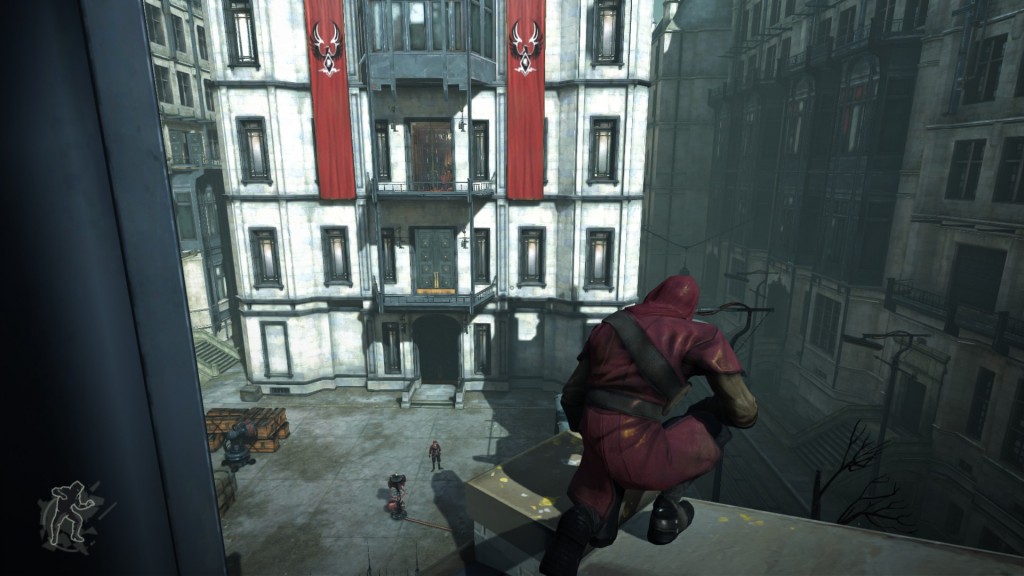 A polished system that’s a joy to get back into, in fact. The simple truth of Knife of Dunwall is that, if you liked Dishonored, this is pretty much the DLC you’ve been waiting for. Dunwall City Trials was impressive enough for what it was, but Dishonored shone because of its sandbox environments that let you approach every single encounter in myriad ways and because of the way its mechanics worked together, and a selection of minigames focusing on individual aspects of the gameplay and mechanics is – while enjoyable – sort of missing the point.

Knife of Dunwall, on the other hand, is a set of three expansive levels that tell the first half of Daud’s tale, and the story runs concurrently with Corvo’s tale of revenge. Daud, wracked with guilt over killing the Empress, is visited by perenially bored god The Outsider who advises him to look into a name – Delilah – and the three levels within Knife of Dunwall chart Daud’s attempts to find out who this woman is and what she has to do with him.

If there’s one complaint I can level against this DLC (actually, there are two, but we’ll get to the second later) it’s that this isn’t a complete story. It’s the first half of Daud’s tale, with the second coming later in the year in The Brigmore Witches, and as such this story doesn’t feel anywhere near finished. In fact, it ends just as it starts to get interesting. Just after reaching the third level I dashed off an email to Peter Parrish, noting that the DLC seemed to be pretty huge considering there must be at least one or two levels left, and then… the game just sort of stops at the end of the third level. Yeah, I didn’t know in advance that there were only three maps and that this is really more of a setup for the last piece of DLC. Sorry, Peter. As such I’m hesitant to claim I like the story, but the plot here has some excellent moments that explore different aspects of the game’s world than the original (in much the same way as the Thief sequels did) and there are a few interesting teases that hint at what we might see in Brigmore Witches, and how it all ties into Dishonored‘s story on the whole.

And honestly, those three maps are really good. Because there are only three I don’t really want to go into deep specifics, but I will say that they each offer a different slice of gameplay with different enemy sets. The first is set in and around one big building, and the mission objectives can be completed in four or five different ways, depending on how sadistic or generous you’re feeling and with whom you want to side. The second focuses on a new district of the city, with the attendant wide streets and plenty of side areas to explore. The third is a smaller, tighter level, with an emphasis on verticality, and while its layout and enemy placement makes it a bit of a new experience, some will doubtless complain that it’s a retread of one of the levels from the base content. All three offer a degree of choice, and as ever, most of the non-lethal options are perhaps more horrible than granting a quick death.

The other complaint I have is that none of them do anything like the Boyle Manor level in terms of turning the game on its head, but they’re so exquisitely constructed that feels like an incredibly churlish nitpick. There are plenty of ways you can approach each of these levels, plenty of side-quests to complete, and plenty of nooks and crannies to explore, all of which build further character for Dunwall and its inhabitants.

As you might expect, Daud has a few new powers and abilities to differentiate him from Corvo. The most noticeable of these is that his Blink ability has a nifty extra: when you’re targeting it, time freezes. This eliminates one of the base game’s problems (the somewhat iffy hotspots needed to blink onto a ledge) and doubles to make combat more astonishingly vicious; you can carefully target Blinks to land behind an enemy, then instantly spin 180 degrees and decapitate them. And, obviously, the ability to freeze time indefinitely while you hold down the right mouse button gives you a bit of a breather if you need to ponder your next move.

Daud’s other new powers aren’t quite so fancy. Void Gaze is his equivalent of the Heart, highlighting runes and bone charms, and – when upgraded – doubles as a fully-upgraded Dark Vision, showing off enemies and traps, so that’s pretty much an amalgamation of two of Corvo’s abilities. Summon Assassin does exactly what you’d expect, calling one of Daud’s Whaler subordinates to join the fight or cause a distraction, but Dishonored‘s focus on stealth means that this doesn’t tend to get much of a look in. This doesn’t mean it’s not fun to play around with, though: summoning an assassin to attract the attention of three guards, then blinking behind them and executing them one by one, is a marvellous potential use of this ability.

His new gadgets, on the other hand, are useful a bit more regularly. Chokedust works like a stun grenade and allows you to either set up a group of enemies for rapid executions or create an opening for some choking-into-unconsciousness, and arc mines are miniature arc pylons that fry foes and destroy the bodies. Both are exceptionally handy, depending on whether you’re going for mass murder or a quieter, less-lethal approach. These also prove exceptionally handy against the new Butcher enemy, who relentlessly strides towards you with a huge, unblockable chainsaw-like device.

The problem with writing about Knife of Dunwall is that – invariably – almost anything I talk about in detail will spoil something, and the content herein is good enough that I really don’t want to. So yes, I’ve been dancing around discussing the levels, the notes, the new things shown off, the discussions with Daud’s lieutenant, and the dozens of other excellent little touches I want to yammer on about. 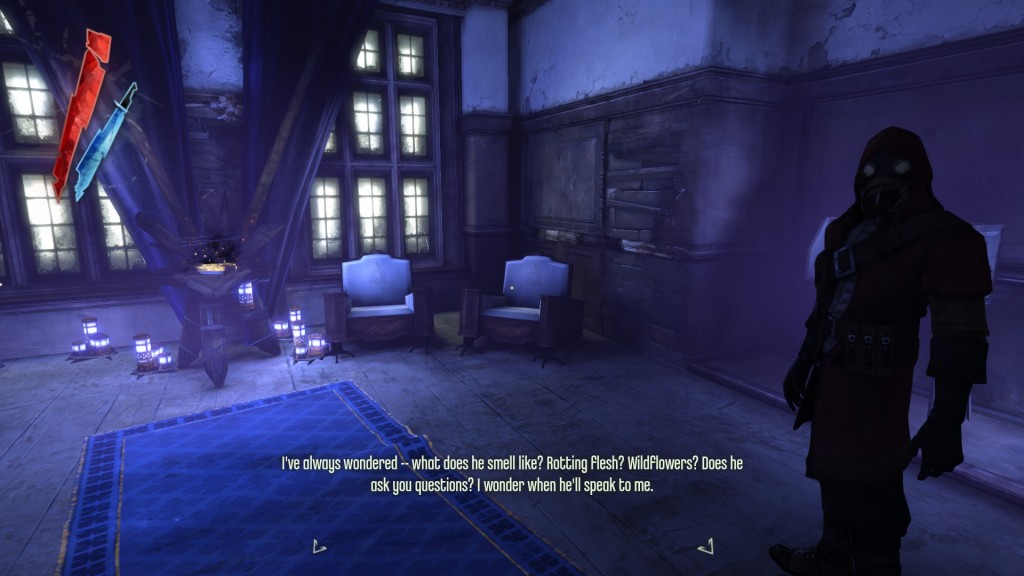 So here’s your takeaway: if you liked Dishonored, then this is three more levels in which you can ply your stealthy trade, and all the usual disclaimers to that apply. If you just race through lopping off heads, you’ll probably be done in an hour or two and will likely wonder what all the fuss is about. But if you go through it twice, for Low Chaos and High Chaos (with multiple endings and an unlockable Master Assassin difficulty to sweeten your second time through); if you take the time to explore and bask in the world-building; if you go back and redo particular bits again and again to try them in different ways, then you’re likely talking somewhere between six to eight hours, and every single one of those hours is just as good as the base game. Knife of Dunwall is a brutal and bloody playground, and how happy you are to just play around with the mechanics and setpieces dictates how long you’ll spend in it.

This is, in short, more Dishonored. Do you want more Dishonored? Of course you do – and what we have here is exactly that. Still, I suppose “more of the same” isn’t the most extravagant or hyperbolic recommendation in the world, and it’s coming awfully close to damning with faint praise, so here’s something a bit more enthusiastic: we’re talking £8 for another superbly-crafted chunk of one of last year’s best games. Just bloody buy it.

By Otto Kratky6 days ago
Hardware